If you’ve ever visited Edinburgh, you’re going to love Playground Games’s latest open world. Forza Horizon 4’s take on the Scottish capital is exquisite. This is the ‘Auld Reekie’ of Trainspotting and T2; all blistering sprints down Princes Street and gruelling slogs up Arthur’s Seat… minus the naughty narcotics. Edinburgh is the glistening jewel at the heart of this Blighty-based driving sim, and the keen eye for detail that’s gone into recreating the iconic city can be felt throughout this electrifying racer.

With Forza Horizon 3, Playground Games served up a scintillating take on the Australian Outback, but virtual vitamin D is a lot harder to come by in Horizon 4. With Bondi Beach now firmly in the rearview mirror, the latest installment in the sandbox series courts miserable drizzle, low-hanging wisps of soupy mist, and wheel-high clumps of snow as the campaign whisks you through four British seasons.

While the weather may have gone down the drain, no amount of digital downpours can dampen my love for Horizon 4’s captivating take on the British Isles. A squashed down approximation of the UK, it encompasses the rugged beauty of the Scottish Highlands, a picturesque take on the Lake District, and sleepy pockets of Cheshire charm courtesy of the village of Astmoor. As you zip around in the returning drone mode looking for those elusive Barn Finds and the clapped-out classic motors they house, it’s easy to forget you’re playing a driving game. Whether flying past fields dotted with hay bales or squinting through the draped windows of a countryside pub, it occasionally feels like you’re playing Everybody’s Gone to the Rapture: Racing Edition.

Forza’s Britain is a world of quaint cobbles and astounding topography, not political strife and drunkards spilling out of kebab joints covered in doner meat at 2am. Not only is it the most personable, enchanting world to grace Horizon, it’s an environment that can stand up against the sandbox greats. You can rack up drift challenge points on the glistening beaches surrounding Bamburgh Castle as part of a dozen-strong team in a Forza Live event. Bomb down Edinburgh’s cobbled Royal Mile in a pocket rocket 2009 model Mini. Leave the Flying Scotsman for dust as you gun past the famous choo-choo in the shadow of the Glenfinnan Viaduct in a riot of a Showcase event. Master a Warthog in a canny Halo-inspired mission along the Scottish coastline. Horizon 4’s hodgepodge collection of locations elevates the already excellent racing at every turn. 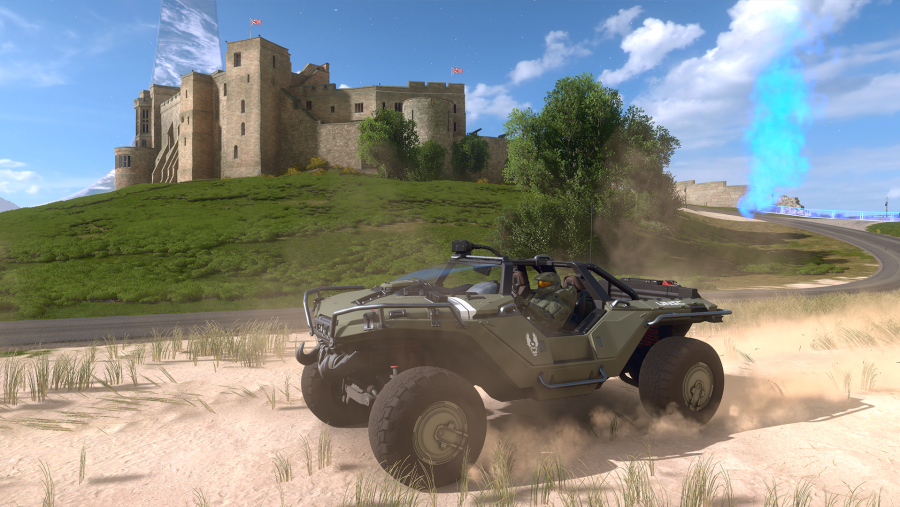 The introduction of the aforementioned seasons also makes the game’s engine purr in fresh ways. As you race through the campaign’s opening ten hours, the action morphs between spring, summer, autumn, and winter events. Intriguingly, as the weather changes, so does the surrounding landscape. A blisteringly blue lake in the Derwent region will spell a watery grave for your motor should you misjudge that hairpin during springtime, but revisit the same region once winter falls, and you’ll be skidding past racers on a frozen lake.

Helping you adapt to the demands these seasons place on your skills is the fact that the core handling model remains the best in the biz. It strikes the perfect balance between arcade accessibility and the more challenging aspects of sim racing. You can feel the slips and skids of ice and wet leaves through your thumbs as you would if you were sat in the driver’s seat, steering wheel in hand. The game’s eclectic roads never change but their surfaces do, so you must adapt on the corners, the driving challenge never anything less than wholly satisfying.

For those with hardcore tastes, a wealth of customisation options let you tinker as you wish – whether that’s tweaking your ride’s suspension or turning off ABS. Meanwhile, those who depend on braking assists and cornering help are also well catered for. Forza remains the untouchable Schumacher of the genre when it comes to racing that’s immediately accessible and instantly empowering.

Such impeccable handling is ably serviced by a garage of magnificent motors. The genius of the Horizon series is that it manages to make the sort of aging motor a mid-level office worker drives as alluring as a bleeding-edge supercar. Every car has a unique character that you can learn to wrestle into a smooth glide across the tarmac. There’s joy to be found in this, whether you’re taming Edinburgh’s Lothian Road in a boxy but beautiful 1980 Fiat 131, or going full ‘shaken, not stirred’ with the ‘Best of Bond’ DLC car pack as you zip through Lakehurst Forest in the spy’s iconic Aston Martin DB5. 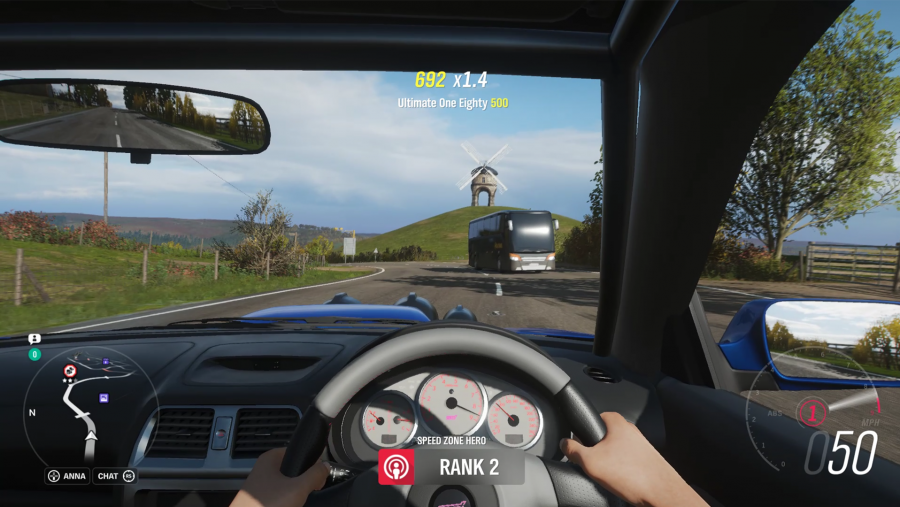 Rather than opening up different Festival events like in Horizon 3 this sequel has you buy property to facilitate fast-travel. Stately homes can be purchased at the likes of Derwent Mansion, or the postcard-worthy Sunflower Meadows, just off the forests of Tarn Hows. Feeling particularly flush? Why not buy Edinburgh Castle for a cheeky £15m. We’re sure Queen Lizzy will be cool with your usurping purchase.

The vision of an interconnected and seamlessly shared online world that Forza Horizon 3 gave us a peek at has finally been realised, too. Once you’re connected, every in-game season plays out over the course of a real-time week, with each weather-specific period graced by its own bespoke championship, and other smaller events. These span PvP fare like Flag Rush to entire co-op campaigns and give the game a shelf life that few other driving sims can match. This ever evolving online world gives you constant reason to keep logging back in. The fact that you can also team up with five friends and create a ‘Horizon Convoy’ to tackle the entire experience further solidifies Horizon’s rep as the most sociable racer around. And while I wouldn’t go as far declaring Horizon 4 the ‘Destiny 2 of racers’, it does have an endgame that draws parallels to Bungie’s megaton sci-fi shooter.

The game’s only real trouble is that its direct predecessor set such incredibly lofty standards. Horizon 3 was the biggest breakout hit that either the mainline Forza series or the sandbox spin-offs have ever produced. The Aussie open-world smash felt fresh and vibrant in a way Horizon 4 can’t quite match. As accomplished a racer as Playground Games’s latest is, then, the core template it clings to feels a little too worn and safe – almost as if it were an expansion to Horizon 3… with added rain. There just aren’t enough new ideas on show in Forza Horizon 4. 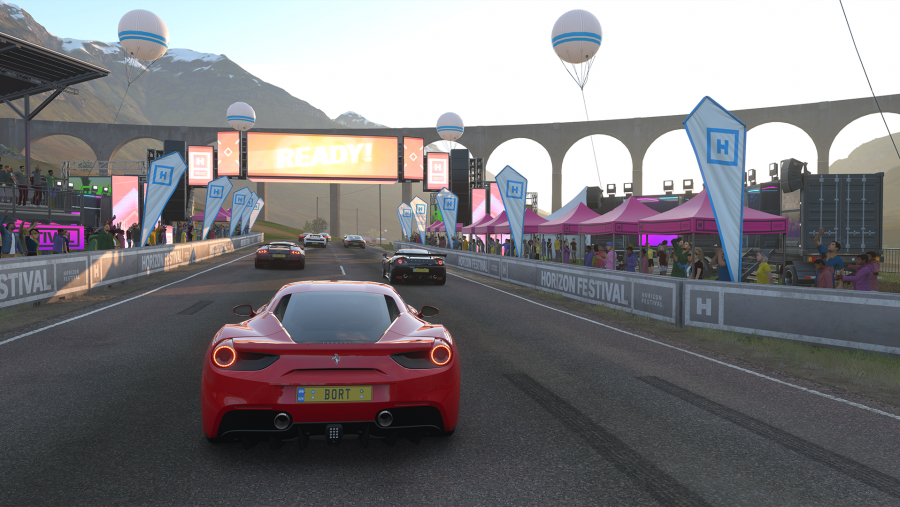 To the developer’s credit, this is a far more accomplished PC port than its predecessor. Not only does the game have a healthy suite of tweakable graphics options, it’s also far better optimised than Horizon 3. Even at ultra settings with everything cranked up to the max, my (admittedly uber powerful) 1080 Ti-powered rig had no problem delivering a flawless 4K/60fps experience most of the time. Even on mid-range hardware, it’s clear this UK-set racer performs better than its Australian ancestor.

Not to say there aren’t issues. There are certainly problems with the cloud saves that operate with Xbox Play Anywhere. If you were hoping to dovetail between the PC and Xbox One version, be careful: my copy crashed frequently while trying to play both versions after I’d synced my saves.

But these issues are the grey clouds that hang over Forza Horizon 4’s excellent raceways – you’ll be aware of them but they’re far out of sight. The triumph is its Blighty setting and the chance to drive across it with the rest of the world. Yes, it feels like too safe of an iteration on its predecessor, but it’s playful and detailed in a way that no other racing series is. Forget the Queen, God save Horizon 4.

With a beautiful Blighty and an innovative season-based online endgame, Horizon 4 is a wonderfully polished, thoroughly modern racer. Sadly, it doesn’t feel quite as progressive or impactful as its Aussie predecessor, and there’s a sense the sandbox series is ever so slightly coasting on its laurels.