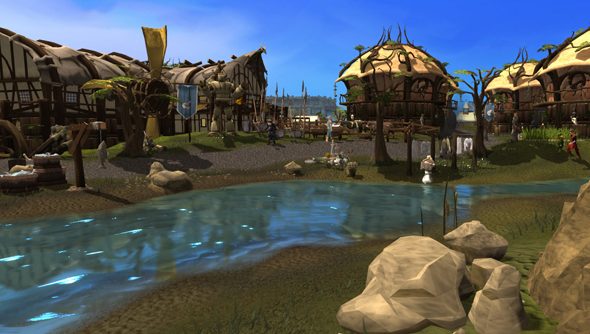 It’s a year to the day since Jagex started sending botters for public executions, so you’re forgiven if the first image to pop into your head at ‘Runescape bonds’ is rows of chained-together HTML5 people, snaking their way through the wilds to market. You’re better thinking instead, though, of rows of Roman-nosed HTML5 people populating an air-conditioned floor in a New York skyscraper, feet propped permanently on their desks, shouting into the ‘70s phones cradled on their laps.

That’s the kind of bonds we’re talking about. Purchasable from Jagex and redeemable for premium membership game time, Runescape bonds will allow gold-rich players to trade their earnings for subscriptions.

A single bond in Runescape can be bought directly from runescape.com for $5 / £3 / €4.25, and can be redeemed for 14 days of membership, eight Squeal of Fortune spins, or 160 RuneCoins.

In practice, that means those in need of gold can trade bonds with other players – who in turn can redeem those bonds for premium membership without paying Jagex a penny. The developers hope the benefits will be twofold: they’ll eradicate gold farming by supporting free trading within the community, and reward dedicated players who’ve accrued masses of in-game gold with free game time.

The new ‘pay-through-play’ currency is intended to ensure every part of the game’s community – likely including a huge teenage contingent without easy access to credit cards – can enjoy premium content “during these tough economic times”.

“The launch of Bonds for RuneScape is a really positive move, which will improve the game’s economy and give players more choice in how they get membership,” said executive producer Phil Mansell. “We care as passionately about RuneScape as the game’s community, and are committed to laying the foundations for the next 10 years of RuneScape growth. This update is a firm step in that direction.

“Many players will have accrued a small fortune’s worth of GP and valuable items in-game over their years of playing RuneScape. By introducing Bonds, millions of dedicated players will now have the choice to fund their membership and other services for free through the exchange of in-game wealth for Bonds.”

Jagex CEO Mark Gerhard added: “The key to Bonds is that there are now two paths for our players to access and enjoy every bit of content the game has to offer. No player need ever feel excluded, since they can now access everything in RuneScape by whichever payment mechanic they choose.”

As with Wildstar’s recently-announced CREDD system, it looks like bonds will allow enterprising players to maintain premium subscriptions without ever paying for them. It’s worth noting, however, that Runescape’s base game is playable without a sub.

Multiple bonds can also be redeemed for RuneFest tickets, so that’s something too.

Do you think you’ll be taking advantage of Runescape’s new system, either as buyer or seller?