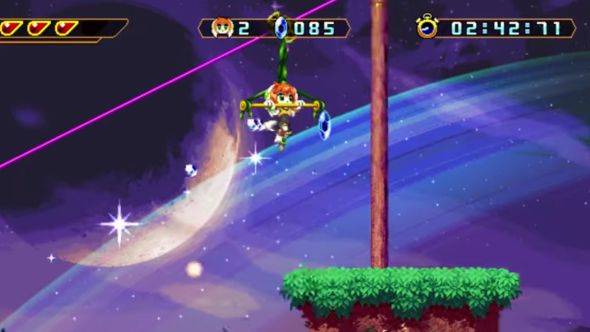 Two minutes of gameplay from forthcoming platforming sequel Freedom Planet 2 have made their way to YouTube over the weekend. Fans of classic 90s platformers will want to read on.

For other retro passion projects and bright ideas, check out the best indie games on PC.

The new gameplay shows Milla the (white and green) basset hound – one of the original Freedom Planet’s three returning protagonists – scampering and fighting through a level, using various abilities and taking down the end boss. It’s particularly brilliant to see her sprinting through an inverted loop, like another nonsensically-coloured cute animal that gamers of a certain age will fondly remember.

It’s no coincidence; the original Freedom Planet was a 2D platformer inspired by Sonic the Hedgehog, one of the true classics of the genre. Indeed it began life as a Sonic-based fan project, before lead designer Stephen DiDuro decided to reconceive it as something more original. After securing a cult following on Steam and on the Wii U, the sequel was announced, and DiDuro has made clear that he and his team at GalaxyTrail are taking the chance to more sharply define the franchise’s identity.

“The original Freedom Planet was modeled as a tribute to Sega Genesis platform games,” says DiDuro. “We’ve learned what works and what doesn’t, what’s fun and what’s frustrating, what we should expand on and what we can afford to lose. With all of this in mind, we feel that we are ready to bid farewell to nostalgia and create a sequel that will define Freedom Planet’s identity as a franchise.”

GalaxyTrail say a sample version of Freedom Planet 2 will be available as a free download, with all playable characters, at the end of the month. If you can’t wait until then, you can check out the original Freedom Planet on Steam.Reviews are 96% positive, and it’ll cost you £10.99 ($14.99 US), or you can try a free demohere.