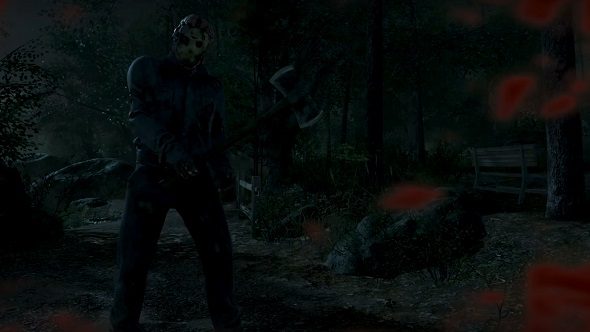 Coming hot off the PAX East showfloor, Gun Media have released a new trailer for their multiplayer horror game Friday the 13th: The Game, showing various Jasons brutally murdering poor camp counselors who get in his way. Besides the gore, the main draw of this trailer is that it shows off the final two Jasons, new camp counselors and new locations that will be present in the full game.

If you delight in a good scare, check out these top quality PC horror games.

The two new Jasons are from Part VIII: Jason Takes Manhattan and Part IX: Jason Goes to Hell, making up the full contingent of slashers that will be playable in the complete release of Friday the 13th: The Game. The finishers on show in this trailer are pretty damn gnarly, ranging from Jason punching a hole through someone’s chest, to impaling someone’s head on a spear, to ripping off the bottom of someone’s jaw. No wonder Jason was a guest character in Mortal Kombat X.

The finishers aren’t all ridiculously gory, with one of them showing a camp counselor being forcibly defenestrated by the masked intruder. Jason does also dunk someone’s head in the toilet at one point, but I don’t think he’s just giving them a swirlie. The ketchup-like blood splatter on the camera following each finisher is suitably schlocky too, reminding players of the game’s B-movie roots.

Some of the counselors that are on the receiving end of Jason’s axe are brand new, as well as certain locations around Camp Crystal Lake. We don’t know what skills these counselors bring to the table, but Gun Media will no doubt reveal all in the coming months.

You shouldn’t have to wait too long to don the hockey mask, as Friday the 13th: The Game is set to release in early 2017. Keep an eye on the game’s Steam page for a glimpse of the killer coming out of the lake.