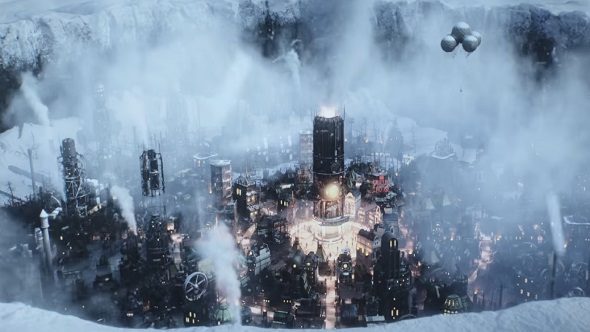 Showing the horrors of its frozen world, 11 bit studios have released a new trailer for post-apocalyptic city builder, Frostpunk. Greatly expanding in scope from the equally bleak This War of Mine, Frostpunk has players trying to govern the last remaining city on Earth, following a icy cataclysm.

For less harrowing simulators, have a gander at these top PC simulation games.

Rather than building a utopian metropolis like in SimCity or Cities: Skylines, the city in Frostpunk is a steam-powered dystopia which is locked within an endless expanse of ice. Rather than building your next sports stadium or worrying about taxes, Frostpunk has city planners dealing with incidents of cannibalism and incredibly limited resources as they try to claw back some semblance of civilisation.

Speaking to Eurogamer, 11 bit studios’ marketing manager Karol Zajaczkowski stated that some of the moral choices in Frostpunk “will tear your heart apart”. Players will “have to make decisions and deal with the consequences,” sometimes ignoring their moral compass in order to see their city survive.

This may involve picking up some of those dead bodies that died on their ascent to your city and cooking them for dinner. It seems that it will be a constant weighing up of the needs of the many versus the needs of the few when playing Frostpunk.

11 bit studios are planning to show off gameplay of Frostpunk at this year’s E3, with its team of 60 currently targeting a release for the second half of 2017. If it comes out in the winter, it’ll certainly make you feel glad to have a roof over your head and a freezer free of frozen orphan meat.