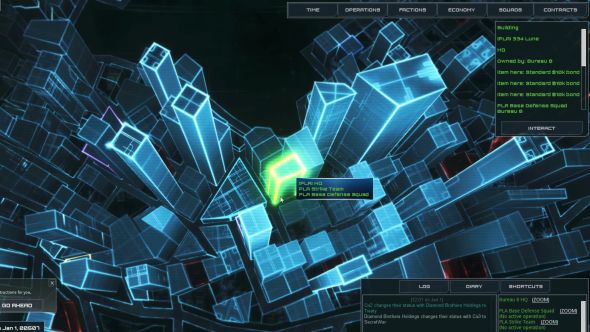 Turn-based strategy game Frozen Synapse 2 is shaping up nicely, according to a new developer diary posted by designer and programmer Ian Hardingham. Hardingham shows off a cool level transition effect, a faction system based on that of Alpha Centauri (excellent choice of inspiration), gives deployment orders to his agents and answers some fan questions.

If you prefer to think before you act, you’ll probably enjoy most of the best strategy games on PC.

The original Frozen Synapse was a simultaneous turn-based strategy game, in which you gave orders to a squad of agents before executing them at the same time as your opponents acted. With a neon-drenched Tron-like aesthetic, you battled opponents in multiplayer or AI across a near-future city in the single-player campaign.

Developers Mode 7 are refining and extending the game for the sequel. During the new video, Hardingham shows off the near-seamless transitions from the slick new city map down to the building level where missions will take place. There are no hard cuts on the screen, and the layout of the building in the mission is consistent with its zoomed-out view at city level.

Next, Hardingham shows the deployment orders you are able to give to your units, both when attacking and defending. These include giving patrol orders to a squad protecting his HQ, so they can detect surprise attacks, and ordering a strike team to set up a checkpoint at a road junction. These will apparently be crucial as you look to control the flow of traffic around the city, which will enable you to decide who gets to the game’s incursions and other missions first.

Factions are also briefly shown off, with Hardingham saying “faction interactions and conversations are very much based on Alpha Centauri… I loved how the other faction leaders felt like characters.” Your rivals in Frozen Synapse 2 will have varying moods (e.g. irritated and frustrated), which will affect their decisions and even their tone when speaking to you. They will also discuss recent in-game events, such as what they’ve done to you, what you’ve done to them, and even what other factions have done to one another. After simulating an attack on the ‘Guest’ faction, Hardingham not only shows their leader changing her tone and referencing the attack, but he then calls another faction, who also mention the attack.

There’s plenty more worth hearing in the video, including Hardingham’s answers to some player questions.

You can learn more about Frozen Synapse 2 on Steam. It’s due for release sometime in 2017.