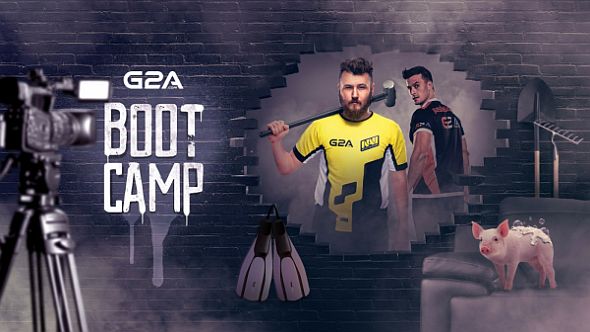 Game key marketplace G2A are hosting a ‘boot camp’ for two of their esports partners, and giving fans a rare insight into how they train their world-class players. They are also running a community contest in which the team whose fans spend the least on G2A will be forced to film a “weird task”.

Train hard and you too could be forced to bathe a pig by a bitter rival. Chase your dreams with our guide to getting better at CS:GO.

Virtus.Pro and Na’Vi – two of the world’s leading esports organisations, both sponsored by G2A – will train for four straight days at the company’s offices in Poland. G2A say that while such training is “typically organised behind closed doors directly by the teams themselves,” this time they will share the sessions with fans worldwide.

The two teams will scrim for hours a day, analyse their own and competitors’ footage, talk strategy, and even meet with a special psychologist. It’s not clear how much of this will be shared, or how, but we’ll keep you updated. The sessions will run from May 16 to May 20.

From May 4 to May 18, G2A are also running a special challenge in which each team’s fans will compete to ‘save’ Na’Vi or Virtus.Pro from having to film a forfeit video, with the forfeit determined by the winners. The nature of the contest? Spending money on G2A.

Here’s the website. As you can see, the company say “every purchase on G2A makesyourteam closer to redemption! Let’s find out which team’s fans are cooler!” with buying things on their market seemingly the metric for coolness. So far, Virtus.Pro have a commanding lead, with their fans outspending Na’Vi’s by 78% to 22%.

There are other incentives to get involved in the contest, such as G2A gift cards and CS:GO weapon skins.