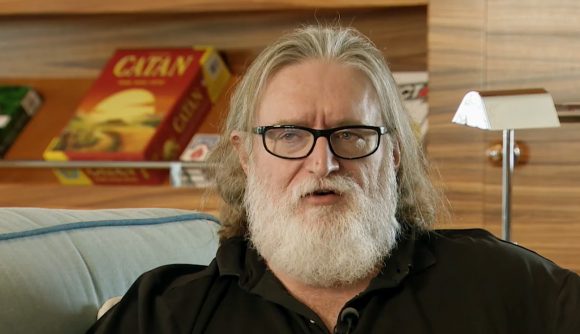 Gabe Newell has been talking about brain-computer interfaces – or BCIs – for some time. The idea is that eventually we’ll be able to directly interact with computers at the speed of thought, and that the computer will, in turn, be able to affect our brains. Newell says this is going to happen way sooner than any of us realise, and in a new interview he breaks down a lot of the absolutely wild implications of such a technology.

“As soon as you’re doing anything with neuroscience, it’s indistinguishable from science fiction,” Newell tells 1 News. “Our ability to create experiences in people’s brains that are not mediated through their meat peripherals will actually be better than is possible.

“So you’re used to experiencing the world through eyes, but eyes were created by this low-cost bidder who didn’t care about failure rates and RMAs, and if it got broken there was no way to repair anything effectively. It totally makes sense from an evolutionary perspective, but is not at all reflective of consumer preferences.”

Newell says the visual fidelity of BCIs will mean that “the real world will stop being the metric we apply to the best possible fidelity, and instead it’s like the real world will seem flat, colourless, and blurry compared to the experiences you’ll be able to create in people’s brains.”

The Valve chief also says that BCIs will allow you to directly edit your mood and personality. “So like, ‘oh, I’m feeling motivated today.’ Right now we think that that’s a fundamental personality characteristic that is relatively intractable to change. And instead, it’s gonna be like ‘oh, I’m going to turn up my focus right now'”, Newell says, pantomiming the changing of a dial. He also suspects that you’ll be able to press a button to set your sleep schedule, like an app on your phone.

Newell acknowledges that this is all a “weird thing to be talking about”, but he’s clearly excited about the possibilities of the tech, which Valve has been working with OpenBCI to explore. Clearly, from VR games to shooting gnomes into space, Newell has some varied interested.

In terms of moving beyond those ‘meat peripherals’, Newell says Valve isn’t working on prosthetics – though game engine creators like Valve are providing valuable resources to those scientific models. (Something he acknowledges that “Epic” or “Unity” are equally equipped to do.) But hey, if people want to replace their arms with tentacles, their brains will probably get used to it. “It turns out brains are really flexible.”

So when are we actually going to see this tech in practice? Newell says that he’s cautious about starting to build a consumer product while so much development and discovery is still ongoing. Also, there are security concerns to think about, because any computer is susceptible to being hacked. “Nobody wants to say, ‘Oh, remember Bob? Remember when Bob got hacked by the Russian malware? That sucked – is he still running naked through the forests?'”