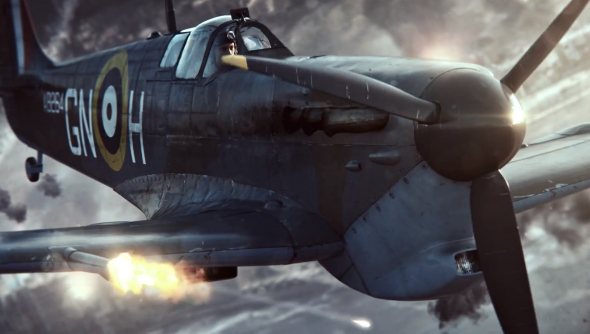 War Thunder has screamed its way across the internet over the past year. In its first twelve months of open beta, the aerial dogfighting game has gathered 5 million players, with more coming in every day thanks to its debut on PS4. That makes it one of the most successful flight sims of the past decade, seizing a massive victory in a field believed to be the domain of just a few plane anoraks in this shooter-obsessed age.

Gaijin Entertainment’s CEO Anton Yudinstev has been speaking out on War Thunder’s triumphs, noting that in the battle between free-to-play and traditional paid-for games, his side is not the greedy one.

Talking to GamesIndustry.biz, Yudinstev explained that Gaijin, despite having developed console titles such as II-2 Sturmovik, is a small team that had problems at the start of War Thunder. “We’re a relatively small studio – we have around 100 people – and for us the biggest challenge isn’t to maintain the game after launch. We actually like that. We can enhance it, and improve it. That’s good for us. I’m not sure it’s good for big, major studios, but we can be very flexible.

The bigger challenge was marketing and stuff like that. When we started the open beta, we actually didn’t have any marketing team at all. We had one person, and he was responsible for marketing, for PR, for everything. So although there were a lot of technical challenges – server size, maintaining those servers, stuff like that – that’s part of the job that we like. We’re a development studio. We have about 100 people and almost every single one is on development. Even now, our core marketing team is four people.”

Those four people have achieved greatness though. Since War Thunder launched in November last year, five million players have taken to the skies. Yudinstev sees these numbers as not only proof of his studio’s success, but that Gaijin were able to fire back up the engines of flight sim interest. “Ten years ago, flight simulation generally was rather popular. Three years ago, it was so niche we could almost know everyone by name, and mostly it was the same players as ten years ago. We wanted to attract more people, and we’ve been successful. That’s more than any flight simulation game in the last decade.”

War Thunder was a launch title for the PlayStation 4. Unlike the PC, the console territory is unfamiliar with free-to-play games, perhaps even a little frightened of them. With hate for microtransactions burning an ever-bright flame on Twitter and forums, Games Industry posed Yudinstev an interesting situation: In a world where Call of Duty takes $1 billion in less than a week, it’s the studio trying to give a good game away for nothing that is called upon to explain its methods.