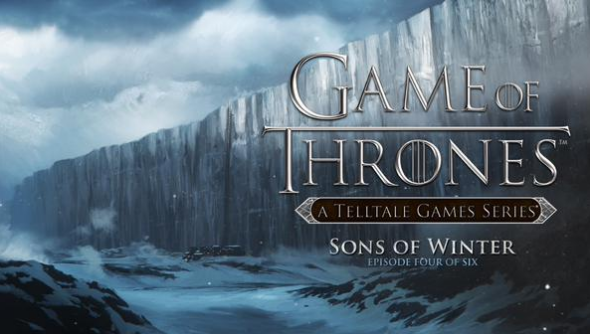 In a very teasing teaser, Telltale have revealed the title of the fourth episode of its Game of Thrones series. Our fourth outing is titled Sons of Winter, and the poster gives us a little clue as to what may be going on.

The poster features the Wall, and if you’ve been following the TV show you’ll know the timeline used in the games is fast approaching a very notable moment for the Night’s Watch atop the Wall. Season 4 of the TV show saw Castle Black and the other Wall defences attacked by the wildlings who live north of the dividing hunk of ice. The game has gradually been working its way towards this massive assault, and it looks like Episode 4 could be the day of reckoning for Gared and his brothers at the Wall.

The tweet revealing the poster merely says that the episode is coming ‘soon’. Expect a far less mysterious release date to emerge from the snow very soon.