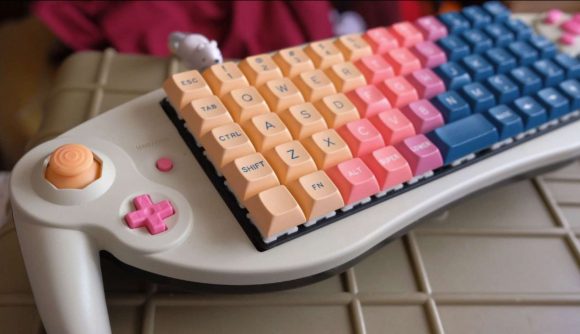 You probably haven’t seen one of these before – back in 2002, Nintendo released an unwieldy variant of its GameCube controller with a full ASCII keyboard slap bang in the middle, allowing you to chat on Phantasy Star Online – one of the few online games on the platform. Redditor Holychipmunk‘s taken one of these little-known controllers, swapped in new mechanical switches, and converted it into the most unique PC keyboard we’ve seen in a while. He’s managed to keep all the controller buttons and sticks working, too.

For the keyboard itself, HolyChipmunk’s swapped out the old membrane panel, replacing it with a set of linear Glorious Panda mechanical switches and topping it off with colourful DSA Vilebloom double-shot keycaps. To neaten the whole thing up, he’s also swapped out all those aging controller sticks and buttons with custom colour-coordinated replacements from PinkCadi.

Before you go out and find your own ASCII GameCube keyboard to hack away at, just remember this build took him over 12 hours of soldering and cutting away at the internal plastics. Also, these Japan-exclusive keyboards don’t come cheap – you’ll be looking at around $200 for a used one online, much more than the best gaming keyboard.

Since he’s retained the functionality of the original controller buttons, there are a number of games where we could see this keyboard actually coming into its own. In GTA 5, for example, you can use the accurate analogue sticks for driving and flying, then seamlessly switch back to keys. 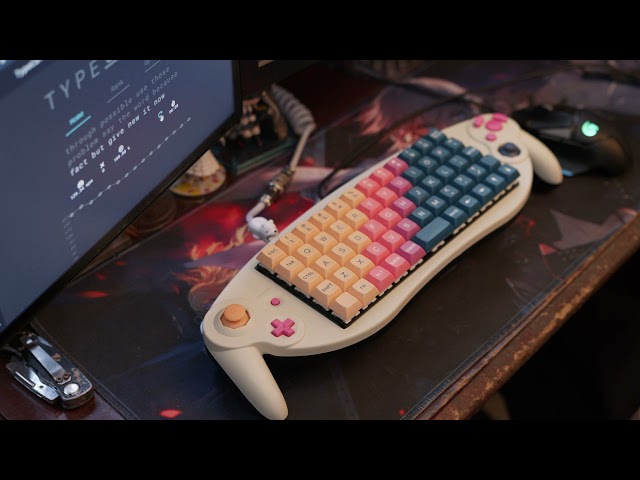 It is a pretty chonky device and likely has a bit of weight to it, but it doesn’t look like the most uncomfortable thing in the world – especially given that GameCube controllers were one of the best things about the diminutive console.