At a trade show with more than 340,000 attendees it’s hard for a developer to get noticed, especially if you don’t have the budget to build a booth large enough to house a tractor.

We scoured high and low to find these developers around Gamescom. Some were easy to locate — they’d bought a stand on the Indie Megabooth or set up a shop in the business centre — others had ninja’d into the convention, building pop up meeting spaces in the cafes or out in the smoking area. Wherever they were we tracked them down and inspected their wares.

We can’t write a full preview for everything we saw but, to make sure as little as possible slips through the cracks, here’s a rundown of the games that stood out. 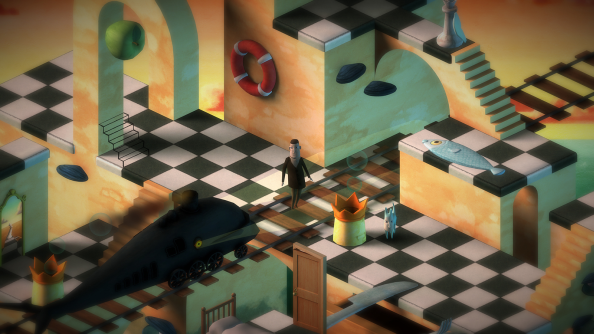 In Back to Bed you play a human-faced dog thing, the dream projection of a sleepwalker. It’s up to you to guide your creator back to his bed through a world of dripping Dali clock faces and whales on train carts.

Bedtime Digital’s puzzle game has a simple core concept: the sleepwalker walks in a straight line until he hits an object, at which point he turns 90 degrees clockwise and continues walking. From that they’ve built something weird and wonderful. They’ve wrapped the thing in an art style that screams surrealist dreamscapes and the puzzles become surprisingly complex as new objects are added to complicate a level.

You’ll soon be rushing about the maps, trying to keep one step ahead of the sleepwalker, tossing giant apples down in front of him to divert his direction away from whale trains, deadly ledges, and slippery fish.

It’s just gone on sale on Steam, too, so you don’t need to wait around to start playing. 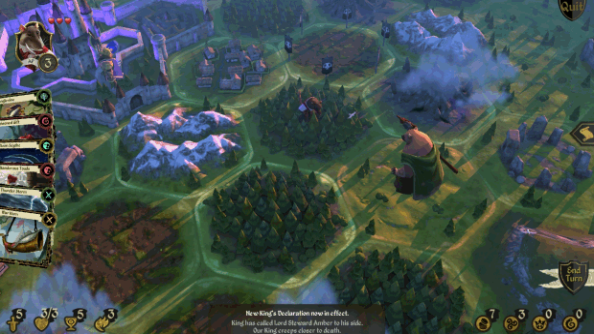 For such a colourful, cartoonish game, Armello’s got a dark heart. The set up is that each of the four players control a different clan hero hoping to take power from the current king, who lies ill at the centre of the board, infected by ‘The Rot’. Before you can approach the board’s centre you must travel around the kingdom building your power, either through battles, diplomacy, or duels. In that respect Armello threads RPG strands into its strategy game. You’ll collect cards through your actions, some of these can be played on your turn, some on your opponents’, meaning you’re always taking part in the game.

The endgame can be as simple as charging to the centre and trying to kill the king when you think you’re powerful enough, but there are other means. You can become the king’s protector, fending off other players and being named his successor after he succumbs to his illness. You can even become infected by the Rot itself, and spread it across the kingdom.

There’s a lot of interlocking rules at play in Armello, making it a complex board game, but it’s right at home on the PC. 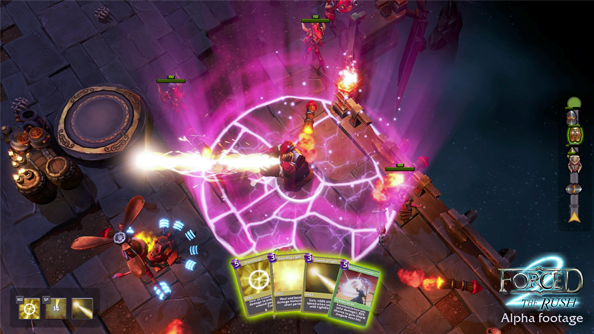 In Forced 2, Betadwarf have turned the usually calm and considered roguelike genre into a hectic race against other players. You start each game by picking a hero who comes equipped with a standard primary attack and you’re dealt a hand of random ability cards before being thrown into a procedurally generated dungeon. Each level of the dungeon is populated with traps and monsters and you can only progress when you’ve killed them all.

Progressing gives you points that can be used to play cards from your hand, granting you access to new abilities or powerups.

Forced 2 escapes the roguelike pack in its multiplayer. You don’t play directly play against other players, instead you all run through your own instance of the same dungeon. The player who gets the furthest without dying or reaches the end of the dungeon first wins. There’s a thermometer-like gauge running up the side of the screen that shows which level the other players are up to.

Where Forced’s multiplayer gets exciting is that Betadwarf reckon they could potentially have a 1,000-players competing in this manner.

It’ll soon be headed to Early Access where we can have a closer look. 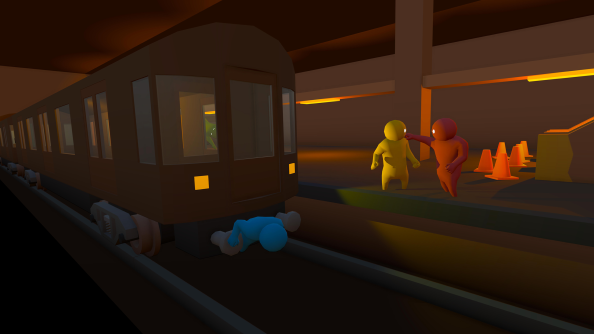 I felt bad for throwing the kid in front of a train. Especially when he threw his controller down on the table and folded his arms in a huff. His Dad gave me a look as if to say ‘Look at the shit I have to deal with now.’ But I had to to win.

Gang Beasts is a drunken brawler party game. You each control a bloated, brightly coloured, mannequin of a character and stagger him about an arena, swinging punches and trying to grab your opponents. You can’t beat your enemies to death, instead they have to be killed by the environment. That means throwing them in front of a train, into a vat of molten iron, or off of a ferris wheel.

The awkward way your characters stumble about, making it difficult to even walk over to your foes, let alone hit them, will have you spewing giggles with your friends. Or feeling awkward when you kill a 10-year-old stranger.

Gang Beasts was very recently picked up by the saintly folks at Double Fine, who’ll publish it under their Double Fine Presents label. It will be available on Steam Early Access on August 29. 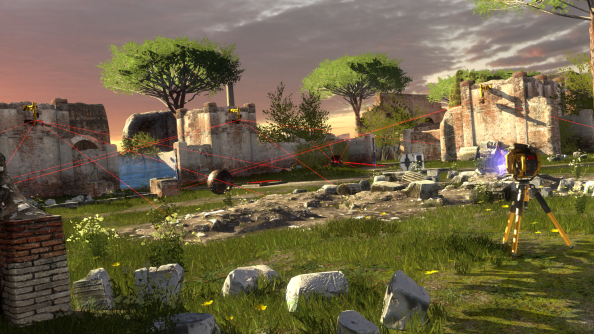 I’d asked the developer showing me Croteam’s bizarre puzzle game because The Talos Principle starts with no explanation, you’re unceremoniously dumped on island and left to explore, and, after 15 minutes with game, I saw my hands for the first time. My intricate mechanical hands.

Yes, Talos is a little strange. A lot stranger when you consider that for more than a decade the only games to come out of Croteam’s doors have been Serious Sam titles. Similar to Portal, it’s a first-person puzzle game where each area is a new problem to be solved. However, it’s less directed than Portal, leaving you free to approach puzzles in whatever order you wish. They exist as areas on an island you can walk between. It also differs in that God is a character.

His voice booms down at you from the heavens, trying to give some meaning to your puzzle solving. He’s countered by a devilish computer AI you talk to through an MS-DOS interface on an ancient terminal.

This is a significant departure for Croteam. It’s also a welcome one. The Talos Principle will scratch your Portal itch in a way that Qube, Quantum Conundrum, and Fract OSC fell short. 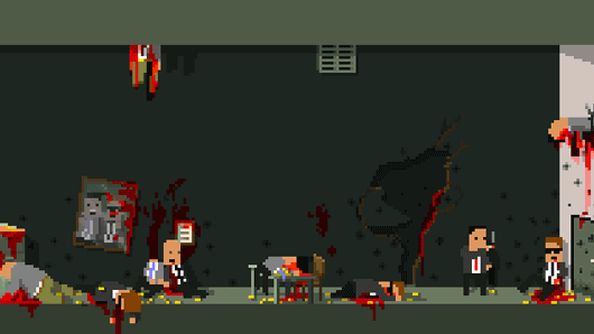 Not A Hero is as hilarious as it is awesome. A 2.5D shooter where you’ll gun through levels, sliding from cover to cover getting headshots, unlocking bonuses, and feeling effortlessly cool. Then you’ll come across a box containing a kitten strapped to TNT. Let the meowing cat free and you’ve five seconds before the explosion takes out the entire floor of the tower block and all the people in it.

Each level is about forwarding your boss’ agenda; BunnyLord wants to become mayor and to do that he wants to show he’s tough on crime. You need to clear out every tower block in the city before the day is over. Delivering bullet-flavoured justice to Russian mobsters, gangbangers, and Yakuza. The standard action has you working your way up through a building from ground level, killing everyone in your way.

To complicate matters, each mission has four special objectives – such as headshotting every enemy, completing the mission in under 90 seconds, or firing fewer than 30 bullets. To get a star rating on a level you have to complete all four in a single run. Not A Hero’s already a challenge, with only a couple of hits spelling death, so getting a star on every level will be a heroic task. 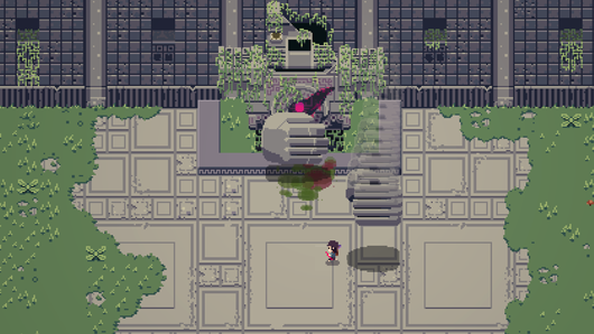 Originally made as an entry to Ludum Dare, Titan Souls gives you an open world populated with 20 extremely difficult bosses, and one arrow. Happily, you can tractor beam the arrow back to you, but doing so leaves you vulnerable to attack – making timing everything in Titan Souls.

The bosses in Titan Souls are oddball creations: a brain in a giant block of ice that slides at you, trying to smear you across the floor; a heart in a giant ball of gelatinous gloop which divides into other bouncing balls of goop with each hit; the devs even showed me a mid-game boss, a yeti that fires snowballs at you at a ridiculous rate before rolling at you itself. Each is unique and each presents a new challenge. If you’re the sort of person who adores games that kick you in the proverbial balls and try to drown your proverbial head in the proverbial toilet then when this releases next year you’ll be a very happy, if in a lot of proverbial pain, person. 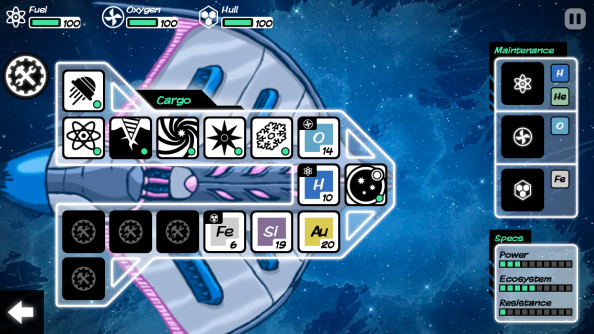 Space is an unforgiving place. A run of bad luck in Out There, a top down strategy game, can have you on the brink of failure.

You’re an astronaut on the look out for resources for a now depleted Earth. To keep your exploration going you’ll have to keep your ship stocked up with fuel and oxygen, all while trying to minimise damage to your hull. You’ll jump about the galaxy in search of planets to mine for minerals and gas, avoiding conflict with hostile aliens and trading with the friendly ones.

That last task is made more difficult by not being able to speak the aliens’ language. You’re yeses and nos can start a war or forge an alliance. Over time you’ll start to pick out words from the aliens’ gibberish, but that’s only if you survive long enough.

If you were a fan of FTL or Flotilla this will scratch the same itch. 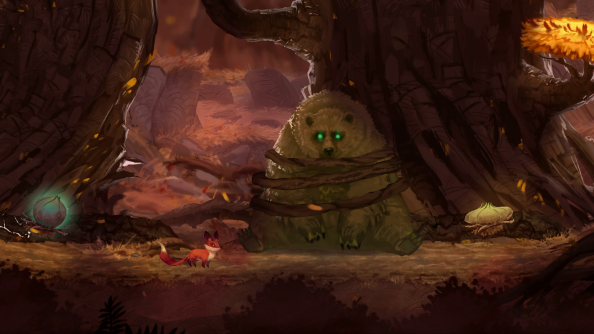 Swing Swing Submarine only had a prototype of their puzzler to show me but Seasons After Fall’s already an intriguing platformer. You play a small fox who has the power to change the seasons at the press of a button.

All the action takes place in natural environments which react to the weather in different ways. In Autumn there are long vines which have curled into a knot which in Winter go limp uncurl and can be used as bridges. The forest plays host to strange floating jellyfish that, if you sing to them, can follow you, but only in Autumn.

These different states often contradict each other, you need a wintry bridge to walk over but the jellyfish can only follow you if it’s autumn. It’s up to you to puzzle out the solution.

Seasons After Fall isn’t the most original puzzle game but, like Braid, it’s core mechanics are set to become more complicated as the game progresses. Again, like Braid, its painterly visuals and gentle score will draw you in.

It’s definitely something to keep your eye on. 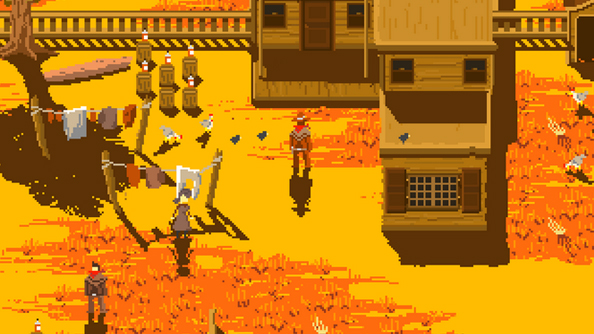 Every NPC you talk to on your way can be held up at gunpoint, and actually shot. In consequence, you find yourself dodging the sheriff and his deputies and accidentally-on-purpose murdering entire cities. Your lives are represented by hats: when you run out of hats, you are dead forever. 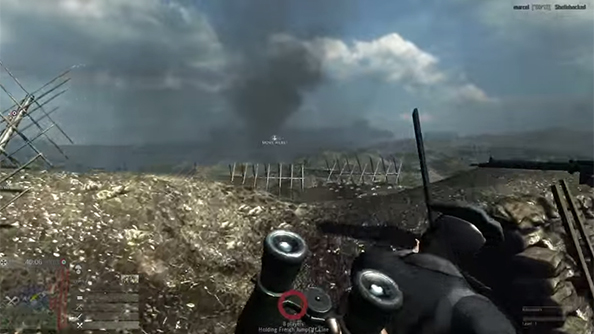 Verdun, Blackmill Games’ punishing WW1 theatre shooter is out already and enjoying some success, in no small part thanks to a perfectly timed Steam Sale to mark the centeneray of the First World War.

That success is interesting: traditional games industry thinking suggested that WW1 was too brutal, too difficult a setting for gamers. Instead, Blackmill, a tiny team of students, have turned that thinking on its head: turns out players are more than happy to embrace the dark meat-grinder of trench warfare. Blackmill are going to grow and grow. Well done them.