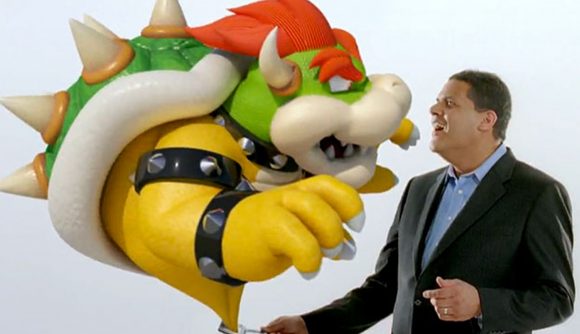 The fortunes of GameStop – the most recognisable videogame retailer in the United States – have been on a downward trend for a half-decade, and the company’s efforts to turn things around have been making sporadic headlines over the past few months. Now, GameStop’s board of directors is getting a shakeup – one that includes former Nintendo of America president, Reggie Fils-Aimé.

Yes, Reggie ‘my body is ready‘ Fils-Aimé. Reggie ‘I’m about kicking ass‘ Fils-Aimé. One of the most notable faces of the past generation of videogames. Prior to his tenure at NOA, Fils-Aimé served as a marketer everywhere from VH1 to Pizza Hut and Proctor & Gamble. He retired from Nintendo in 2019, and was succeeded by Doug Bowser.

Fils-Aimé is joined in the board shakeup by former Walmart president Bill Simon and former PetSmart president James Symancyk. GameStop CEO George Sherman says in a press release that “the board refreshment and governance enhancements announced today represent an important milestone in GameStop’s transformation as we continue to evolve the Company’s business strategy for long-term success.”

Time will tell what this actually means for GameStop. A board of directors doesn’t directly run a company, instead serving primarily in an advisory capacity – but these three certainly have plenty of relevant experience to advise with.

The gaming industry needs a healthy and vibrant @GameStop. I look forward to being a part of @GameStopCorp Board and helping to make this happen. https://t.co/pYWFGZ9XKj

Among other issues with GameStop’s retail offering is the fact that digital distribution is bringing down retail game sales in general. The best PC games will all get beamed straight to your house without any need for you to see the sun, after all.