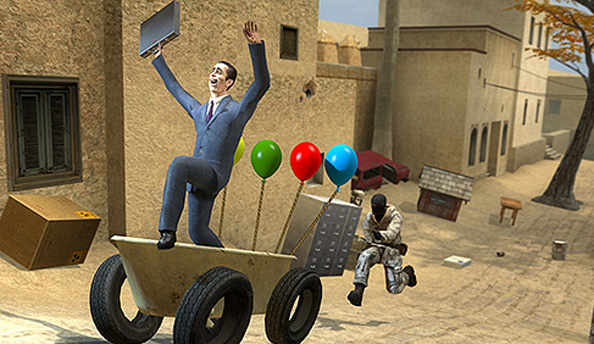 Steam has nearly finished a huge tablecloth-swiping operation that has seen its entire catalogue switched over to a new content delivery system. If you play Garry’s Mod, it’ll mean good things: patches issued direct from the developer without Valve as bottleneck, and more expeditious downloads. But it’ll also probably mean a couple of teething troubles.

When Garry’s Mod makes the jump next week, any addons you might have manually installed aren’t guaranteed to bridge the gap with it. Developer Garry Newman recommends backing up the game’s folder before updating.

If you run a server, especially, things are going to change. The old system for downloading and updating servers will stop working, and you’ll need to follow the steps described on the Garry’s Mod wiki.

This has all got a hatch-battony, so let’s here some of those benefits again: “vastly reduced load times”; more frequent patches; an opt-in development branch for “bleeding edge” updates; a choice of hard drives at installation.

Yeah, that’s the stuff. What’s more, modding will become clearer and easier thanks to a change in where files are extracted to.

For more on precisely what SteamPipe is, see our write-up. But the gist is: it’s good news for Garry’s Mod and Steam games in general.