When Garry’s Mod debuted on Steam nine years ago it cost a meager ten dollars (seven pounds). Today, it costs the same. Given how much it offers players in return – an open, manipulatable sandbox with almost limitless possibilities – and as a mod that labels itself one “you definitely can’t win”, it seems like a pretty good deal. A win, if you will.

In 2004, creator Garry Newman launched his eponymous project to the world free-of-charge. After all, he thought, who would pay for what is essentially an idiosyncratic take on a free Source engine mod? Fast forward two years and a dedicated, burgeoning community had blossomed, the press were fighting for coverage, and Valve themselves had approached Newman to discuss bringing the mod to their digital distribution service.

At this stage it seemed Garry’s Mod had transcended its nominal “mod” appellative, becoming a fully-fledged game in its own right. Newman describes the hype at this time as “crazy”, but recalls refusing Valve’s first offer. “The price goes back to the original days,” he explains. “We decided to have it that cheap because when Valve originally asked if we wanted to put it on Steam I said no. I thought: who would pay for it? When we were first talking about price we thought $10. If we’d have priced it at $50 or $30, or even $20, I don’t think it’d have lasted ten years.” 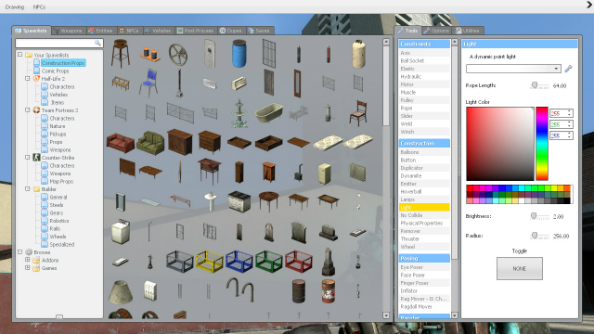 Back then, Steam was a far cry from the juggernaut it is today. In 2006, although into its third year of existence, many still saw it as an inconvenience – a tedious install that obstructed direct desktop access to Counter-Strike. Granted, Newman saw great potential in the digital platform – it was going to big – but was nonetheless unsure of where Garry’s Mod fitted into that projection.

“We were expecting it to sell, like, ten to 20 thousand copies in the first day. Maybe the same over the course of a month, and then basically die off,” admits Newman.”It could’ve gone either way, so it is a big surprise to be sitting here ten years later and be thinking about when I was in my mum and dad’s house making this game. I didn’t really have a clue that it was going to change my entire life.”

Nine years since first landing on Steam and close to nine million units sold later, it’s clear Garry’s Mod very much altered Newman’s career path, which once consisted of blue collar agency jobs and factory work. Although still baffled by the logistics of his son’s choice of employment to this day, it was Newman’s father who introduced him to videogames in the mid-’80s, at just eight years old, by virtue of the Sinclair Spectrum.

A combination of learning to read and an admiration for the prodigious Oliver twins stirred Newman’s first interest in making games. Philip and Andrew Oliver were developing games in their mid-teens whilst still at school, thus their work was stuff of legend as far as Newman saw it. The Dizzy series in particular were games he and his father would often play together.

“We’d play so far,” says Newman. “But obviously there was no saves or anything back then – we’d have to leave the game on overnight and write a little note on it for my mum not to touch the computer in the morning!” 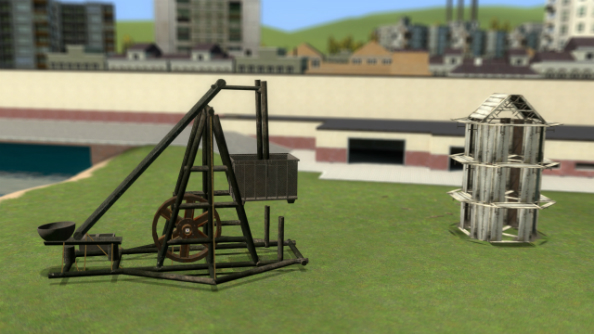 By the time Newman reached his teens, developing videogames of his own had become a non-paying, time-consuming hobby – a result of zero prior formal coding experience. Facewound – “Mario with guns” – was to be his ticket out of the monotonous nine to five cycle he’d landed in after dropping out of college, and Facepunch Studios was the banner he’d do it under. In the background, Newman was also tinkering with what would become Garry’s Mod.

Not before long, work on Facewound stalled. It’d become a chore to develop and, conversely, Garry’s Mod was a lot of fun. But Facewound had a purpose. It was a ‘game’ as per the archetypal definition; there were levels and objectives and incentives. Garry’s Mod, on the other hand, was a distraction – it was Garry Newman messing about with a Source engine mod whilst holed up in his room at his parents’ house. He was merely pushing the engine to its limits, seeing what he could make it do.

By 2004, Newman had placed Facewound on indefinite hiatus and released a free version of Garry’s Mod into the wild to a mixed reception. “There were two major reactions,” he says. “The first was like, ‘Oh yeah. This is good. Make more.’ At the time there was another [Source] mod called JB Mod and [Garry’s Mod] was kind of similar. The other reaction, then, was from their community basically saying ‘Fuck off. This is still making me want to play JB mod’.” 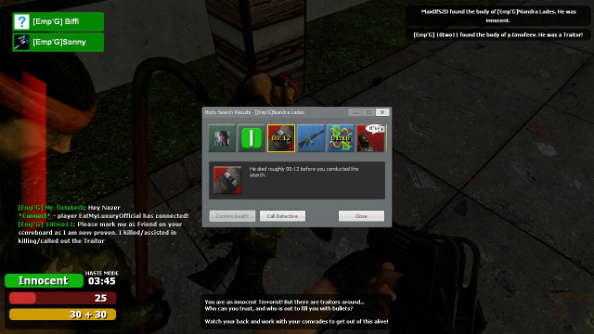 As word spread, the former remarks soon eclipsed the latter and it became clear Newman was onto something special. With Facewound now all but extinct, Newman championed Facepunch Studios as a one-man team, but as the Garry’s Mod community continued to thrive, other players stepped in to aid development in the push towards Version One – the iteration rewritten from scratch to justify its Steam price tag.

“People were suddenly contacting me all the time,” says Newman of the maelstrom that enveloped his initial success. “I’d played Half-Life to death so the people who were in touch – I recognised their names from the game’s intro when you’re on the train heading into Black Mesa. That was pretty crazy. When I was playing Half-Life, I could never have imagined that these people would be emailing me – especially given that Garry’s Mod is essentially a pirate version of Half-Life!”

After just six months on Steam, Newman realised game development had become his full-time job. He was now getting paid for doing something he’d enjoyed doing for free for several years, yet he was always learning on the job – particularly in the game’s earlier renditions. 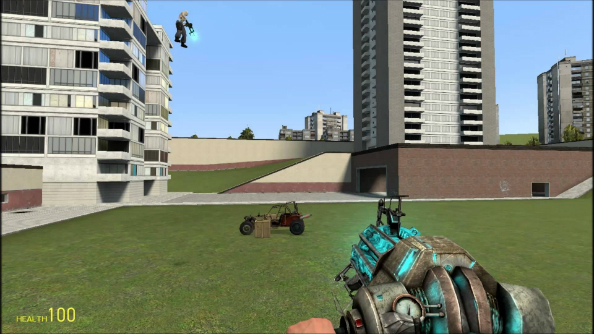 As far on as version four, Newman was operating without Source control software, meaning if the game stopped working or inexplicably started crashing he would start again from scratch. This would happen three or four times throughout each update’s development – something Newman brands “absolutely crazy” looking back, but a measure of just how little he knew about coding back then.

Frustrating as it was, this indurated method of trial and error was the only way for him to learn, grow and overcome these obstacles. Without the struggle, Newman admits, he wouldn’t know half of what he does now and with the safety net of modern commodities such as Google, an instantaneous solution is never far from reach. Furthermore, he wouldn’t have stumbled across ragdoll posing – using the Physics Gun to model inanimate characters – which has, in essence, become a subculture within the wider world of Garry’s Mod.

“When I first got the ragdolls to be poseable I was like, fuck me, this is crazy!” Newman proclaims. “I remember I couldn’t wait to post a screenshot on the forums and say, ‘check this out!’ I’d personally never seen anything like that before, I wouldn’t even have guessed that it was possible so when it started working it was crazy.”

Facepunch is of course now hard at work developing Rust – another open-world sandbox in the wake of Garry’s Mod – and these lessons have proved invaluable throughout its development. Likewise, so too has taking a back seat and letting the community dictate where the game goes, which, again, was something Garry’s Mod did almost by accident. 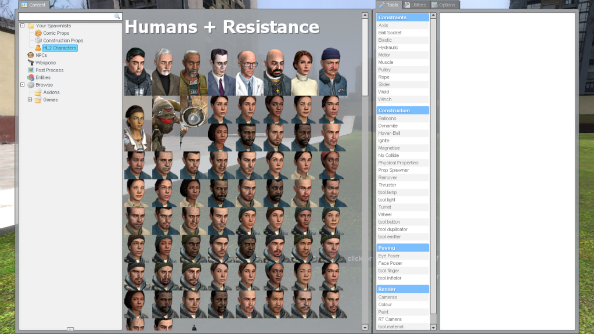 In late 2009, Facepunch launched the Fretta Contest – a chance for users to design their own game modes using the Fretta programming framework (fretta means ‘hurry/haste’ in Italian) and see them implemented in the main game. Trouble in Terrorist Town was crowned the winner and is now one of the most popular modes in Garry’s Mod.

“It’s like a mod inside a mod inside a mod. Like Inception!” says Newman of the winner. “They’ve kind of made their own standalone game now, which is kind of great from our point of view. Before Garry’s Mod they hadn’t really made any games but Garry’s Mod introduced them to development and showed them how easy it was. Garry’s Mod has given them a career as well.”

As Newman talks about bringing other teams on he speaks with absolute, genuine pride. After all, Garry’s Mod was a bit of a mishap in the beginning, it was unplanned – it was Newman’s baby, but a happy accident. Seeing other people’s take on his creation means a lot to him.

In the age of Minecraft, Rust, and as a result of the almost perpetual success of Garry’s Mod (naturally, there’s versions of Minecraft in GMod and vice versa), I ask Newman what he thinks it is about this type of game that has proved so popular.

“I suppose it’s about using your own imagination and being able to do whatever you want,” he says. “You can get a game like chess where it’s just one game – there’s only so many things you can do with it. With a game like Garry’s Mod you can come up with your own ways to play and if you get bored of that you can write your own mods or create your own add-ons; there’s the Steam Workshop and download new stuff. It’s unlimited content if there’s enough people involved.” 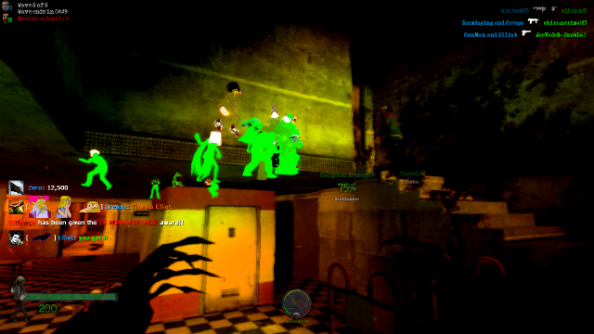 If you were to check Steam right now, Garry’s Mod still costs ten dollars. Even after all these years, all the publicity, all the money, the players, the demand. Given how well-established it is now, would Newman ever consider upping the modest price tag?

“No,” he says. “I mean, we’re kind of working on a sequel, so it’d be stupid to the raise the price. It’s early days. We’re looking at having more VR stuff in it – that’s the big point of it. And it won’t be called Garry’s Mod 2.”

VR in Garry’s Mod. I’ll let that sink in for a second.

Next year marks Garry’s Mod’s ten year anniversary on Steam. Whilst Newman suggests he might organise something in celebration, he notes that “it won’t be anything crazy”. How the community reacts, on the other hand, could be another matter entirely. For this is the true beauty of Garry’s Mod: 11 years on and the community is still surprising the man that created it. Dealing with the ever-evolving expectations of such a long-standing community, though, isn’t without its challenges. 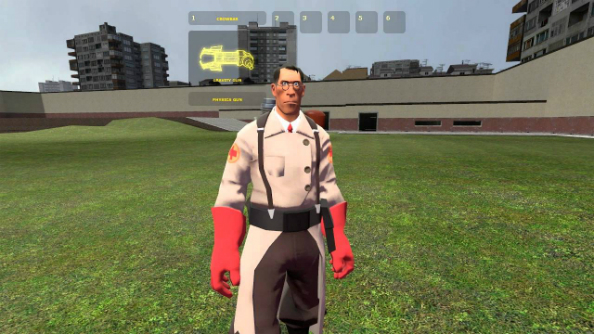 “From a design point of view, it’s just about giving the players as much freedom as you can because they’ll always surprise you and come up with new gameplay, new ways to play,” says Newman. “It’s kind of to stand back a bit and let the players decide what they want to do and learn from that. From a development point of view it’s to employ a long-term development strategy, rather than making a game in a year and throwing it out and working on a sequel. It’s more important to grow the community slowly, rather than trying to get everything done in the first month.”

To this end, it wasn’t until 2011 that Garry’s Mod surpassed one million sales. It weathered the lull PC gaming appeared to suffer between 2008-2010 and came out the other end stronger.

Steam is bigger now than ever, Minecraft has introduced scores of players to PC, and video game streaming is massive. In just four years that six zeroed sales figure has multiplied almost nine times. Finally, Newman’s parents can see now that perhaps this is ‘real’ career.

“Yeah, they’re a bit more happy about it now,” he says. “They still don’t understand it, though. My dad still doesn’t understand how my business works, and how I can work from home even though I’ve got an office – that blows his mind.”