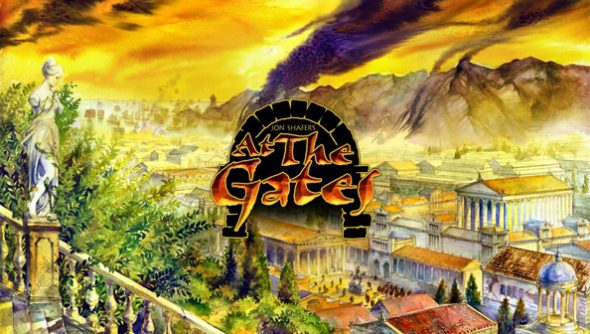 He’s attempting to raise $40,000 to fund the final stages of development of “At the Gates,” a turn based strategy game set at the fall of Rome.

And it sounds kind of brilliant.

Jon and I spoke 48 hours ago, as he put the final touches into his pitch. The game, he explained, attempts to skew 4X turn based strategy games slightly. Although it’s set at the Fall of Rome, you don’t play the Romans. Instead, you star as the Barbarian Hordes, attempting to survive and plunder.

There are many twists. First of all: the map is more dynamic than you’d expect: seasons pass and, as you enter the late-game resources dwindle. Players are forced to make difficult decisions; picking up their encampments and moving to new homes, or invading your enemy’s. The end-game sees you conquering Rome or Constantinople, or die trying.

At the Gates is clever: it’s not attempting to be a grand, overly ambitious strategy game; just a small project built by one of the genre’s brightest hopes. The game has been in development for a year or so, and a fully fledged prototype already exists. The $40,000 Jon is attempting to raise will be spent on finishing the project, but that small sum comes with sacrifices: there will be no campaign and no multiplayer. The aim is to create something great, fast, for strategy gaming’s demanding audience. At the Gates won’t be for everyone; but those who like this kind of thing will really, really like this thing.

And that’s the point. Jon’s making the game for people like him.

“If the game sells 10,000 copies, that would be great. I’d rather be working on exactly the type of games I want to make and earn enough to keep doing, than work on something that is bigger but less interesting to me. Maybe in that sense I’m like the “starving artist”, or at least have the mentality of “this is what I want to do and so I’m going to do it”.

The Kickstarter is live right now. I’m in.

We’ll have much more on At the Gates in the coming days.