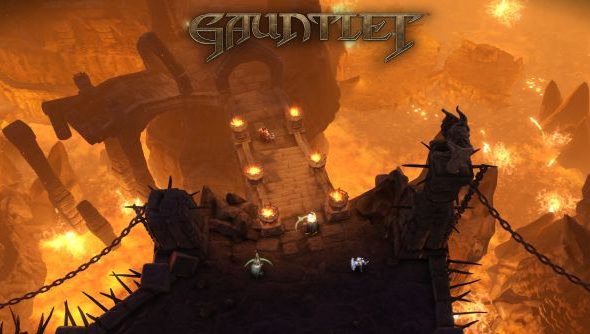 Gauntlet developers Arrowhead, have been awfully quiet as of late, but have finally come out of hiding with a welcoming announcement. The team has been hard at work with a free major content update for the classic revival, which will throw in improvements across the board.

“In truth, we were never fully satisfied with how Gauntlet turned out.” admitted game director Emil Englund. “So, rather than just fixing little things here and there, we have been working on the core of the game to turn it into what we originally envisioned.”

Emil Englund, game director of Gauntlet over at Arrowhead, revealed the studios plans to get Gauntlet fans salivating. “I know that you have been in the dark for a while now, possibly thinking that we were concentrating all our efforts on other things.” said Englund. “I am here to tell you that this is not the case and that the team has been tirelessly working on the game. We have big improvements and a few new features coming up for Gauntlet! Something which we know a lot of you were crying out for.”

So what exactly is included in this free update? Well, they’re being a bit tight lipped about it atm, but Englund did let something slip. “This will mean a free major content update for the game, including improvements to the Campaign and the Colosseum as well as a brand new game mode. I’m pretty sure I was allowed to tell you about the game mode…”

Additionally, Arrowhead is now taking over management of Gauntlet’s online communities, so if you want to get stuck in with discussion, or maybe contact the devs, you can head over to the Gauntlet Steam forums.