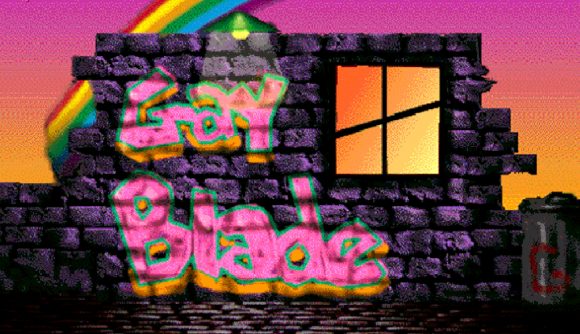 Netflix’s High Score series mostly focuses on the biggest, most famous bits of early game history, from the early days of Atari through the early 90s freakout over videogame violence. But it takes a few detours into lesser-known areas, like the search for the lost LGBTQ RPG, GayBlade. The game has indeed been found, and it’s now available for download through Archive.org.

The original source code for GayBlade was lost during a move, and Best had spent years looking for any copy of the game. High Score only hints at the happy ending – the LGBTQ Video Game Archive provides more detail – but Best did find the original game files back in 2019, just before the end of the Rainbow Arcade exhibit.

With help from Matthias Oborski of the Computerspiele Museum, the LBTQ Game Archive, and Jason Scott of the Internet Archive, GayBlade was made available in an online emulator earlier this year.

Here you go: The Downloadable Version of Gayblade. https://t.co/rMvpm2in5A

Now, a new downloadable release is available too, so you can keep an archive of GayBlade on your own hard drives.