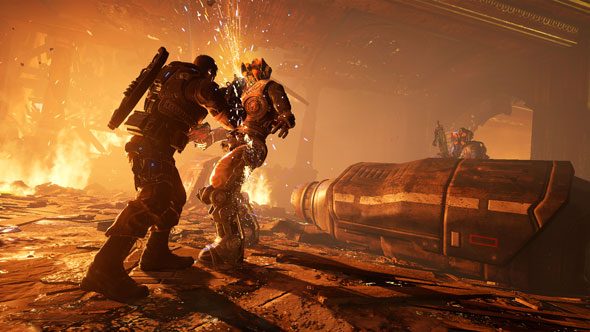 I recently uninstalled Gears of War 4 from Windows 10 after realising it was taking up around 120GB of my hard drive. I hadn’t yet finished it, and I wanted to, but this was too much for one game. Well now there’s a patch to combat its bloating file size.

If you like games taking over your hard drive, check out our list of the best MMORPGs.

The Coalition have just released a patch that’s 29GB in size. But don’t worry, this won’t bloat up your file, it’ll actually make it smaller. Once downloaded, Gears of War 4 should be then sitting at 93GB.

It’s still a hefty sacrifice for one game, though. It must be all those broad shoulders.

Along with the new compression techniques, the update, titled Rise of the Horde, will add a bunch of new skills for each class, including cloaking and stun grenades.

Horde mode will also dish out new skills when you reach boss levels 30, 40, and 50, so you should be playing around with them in no time.

On top of this lot are new difficulty modes and two new maps: Avalanche and Rust Lung. Check out the trailer above to see those HDD-busting textures doing their stuff.