Split-screen multiplayer is one of the most neglected features of gaming in recent years. With the release of every major shooter, dev forums are flooded with queries about whether split-screen will be included, and about 90% of the time that answer is ‘no’, followed by some guff about performance issues, having to render the image twice, or some other spurious excuse. For PC gamers it’s even worse, with split-screen becoming a virtual non-entity on the platform.

It’s not just the co-op where The Coalition are going the extra mile: Gears of War 4 is a technical powerhouse.

Well, Gears of War 4 is bucking that bastardly trend. Creative director Chuck Osieja confirmed in an interview with PCGamesN that the game will feature full split-screen functionality for all the co-op and PvE game modes, although this won’t extend to competitive online play.

When asked the million-dollar question about split-screen co-op for PC, Osieja said:

“Yes. When Rod [Fergusson] came to the studio, he talked about co-op being the cake and not the icing. So when we build a Gears game, we think about co-op in every aspect, whether it’s the weapons, environments, enemies, PC, console – everything needs to be built around the co-op experience.”

Osieja also told us that under no circumstances can you play split-screen competitively: “You can play split-screen versus bots but not against another player”, he said. “And then with the way that PC and Cross Play work, we don’t allow PC users to just go into a standard matchmaking against an XBO user because PC players have a mouse and keyboard.” 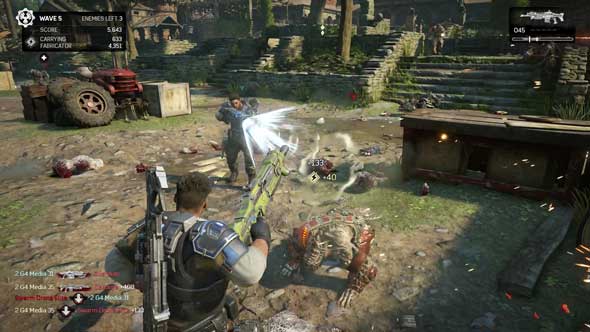 All is not lost for PC players looking to play competitively with their Xbox One pals though, as you’ll be able to host private matches across platforms. I can also confirm from first-hand experience that a poor PC player with a keyboard and mouse will still get soundly destroyed by a half-decent XBO player with a gamepad.

The co-op modes on which you’ll be able to play in split-screen are Campaign, Horde and Co-op Versus. Here’s how it works: one person signs into their Xbox Live account (I can hear the Steam contingent jeering already), while player two signs in as a guest, so you can’t both play using your individual accounts. But let’s not get fussy – it’s a fully-fledged PC split-screen mode in a triple-A game that can be played online or offline, which is in itself cause for celebration.

At long last, the split-screen needs of PC gamers are being met. May this set a precedent for other triple-A developers to stop assuming that us PC folk only play games alone in reappropriated airing cupboards – occasionally we come out and want to share our couch and screen with a friend.

Great news? Or am I just a stick in the mud for thinking there’s no gaming quite like split-screen gaming?