Gears Tactics’ executive producer Alex Grimbley puts it rather neatly: all they’ve done, really, is move the camera up. And make it turn-based – that too. Otherwise, Gears Tactics has a great deal in common with the third-person cover shooter series from which it is spun off. Or at least, that’s the idea.

I’ve never owned an Xbox so Gears of War has never been a big feature in my gaming life, but I know the basics, and Gears Tactics soon checks the boxes. A small squad of soldiers runs from cover to cover shooting horrible mutants, and occasionally butchering them with under-barrel chainsaws. Their armour is battle-worn, comically bulky, and occupants include several big, grunty men – exemplified here by Sid Redburn, who rocks a splendid walrus moustache and an eyepatch.

I dig all this, but mainly because it doesn’t take itself too seriously. “What are we looking for?” grunts Sid of protagonist Gabriel Diaz, father of Gears 5’s Kait, as they raid an office. “The most classified-looking file they got!” grunts Gabe in reply. “Ok, let’s get tactical,” Sid mutters, almost disconsolately, after only a single turn without any combat. Asked to go on overwatch, Sid quips: “keeping my eyes open. Well, eye.”

It’s good for a chuckle, is Gears Tactics, which is necessary considering how unremittingly dark its world is. After almost a century of war ended by the use of a stolen superweapon, a precious six-week peace is shattered on Emergence Day, in which the subterranean mutant ‘Locusts’ literally emerge from beneath the surface of the planet Sera and wipe out a quarter of its human population in a single day. It’s heavy stuff.

Design director Tyler Bielman reckons this story is a key differentiator for Gears Tactics in a genre that’s been getting increasingly crowded since 2012’s brilliant XCOM: Enemy Unknown inspired its renaissance. He’s not wrong: I played several hours on two save files, one fresh and one that started later in the game, and there is drama here beyond most anything else in the genre. The plot twists, and the central cast of Gabe, Sid, and Mikayla – a sniper with a pretty justified grudge against the Coalition of Ordered Governments (COG – hur dee hur) which the others serve – have clashing agendas and murky personal histories.

Gears Tactics is set roughly a year after Emergence Day, whereas the original Gears of War picks up 12 years later, so Tactics is able to tell a fresh story. That’s been helpful as a lifelong PC gamer with little exposure to this world – its depth is palpable, but I haven’t felt overwhelmed, and have spent a few happily curious lunch breaks on the Gears Wiki learning about the whole miserably grimdark universe.

For more like this: check out the best strategy games on PC

Call me predictable, but I’m going to keep comparing Gears Tactics to XCOM because the rest of the genre is still aping many of its ideas. The ways in which Gears Tactics both follows and breaks these conventions are telling, and give you a good sense of how it plays. 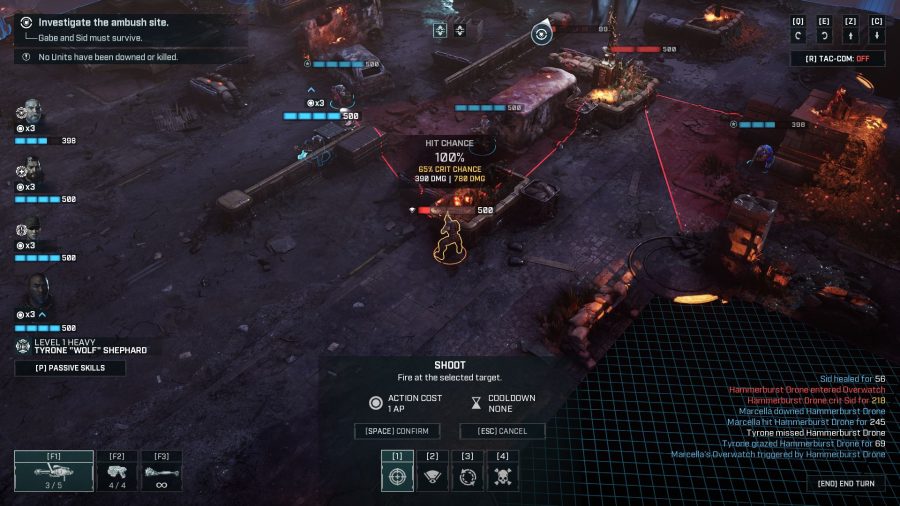 Think XCOM, but add the following differences. Your characters get three action points in a turn, with which they can do anything. The map is open rather than grid-based, with a bit of magnetism to snap your cursor into cover to ensure you order your troops to safety rather than leave them standing a foot away from a wall. Overwatch is restricted to conical zones rather than covering anything your soldier can see in 360 degrees, but you get as many overwatch shots as you have actions remaining when you enter it.

There’s also a cool ‘downed’ mechanic, whereby fatal shots on a bad guy will give you two turns to finish them off with a grisly melee execution. If you manage it, everyone else on your squad gets another action. If you don’t, they’ll die anyway so nothing is lost. Melee attacks are instant kills, with a hefty three-turn cooldown the price you pay for such potency. However, most of your characters’ skill trees enable you to reduce those cooldowns, and even grant healing, bonus actions, or other utility every time you carve up a Locust. Those skill trees are also far larger, and offer more flexibility in your builds, than XCOM’s two tracks of mutually exclusive perks. 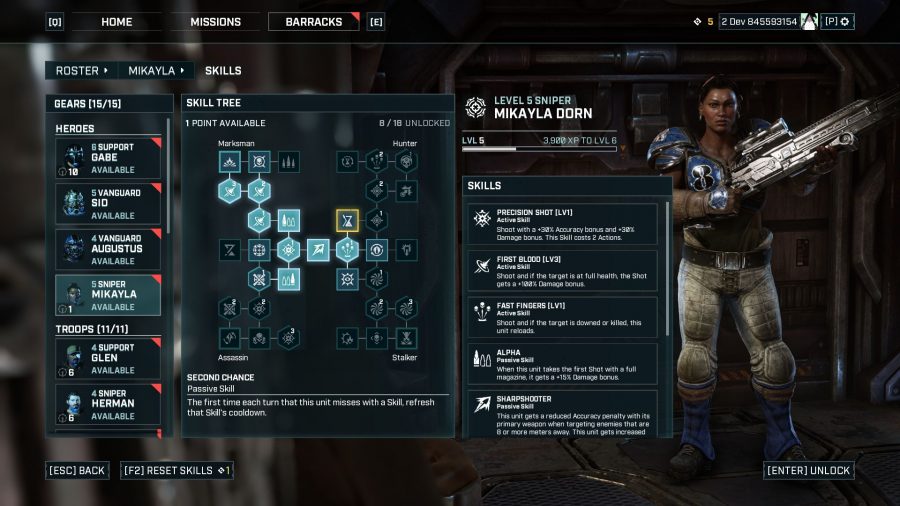 The choice between hanging back on overwatch and pushing forward with chainsaws is an interesting one. Bielman presents it as a simple matter of playstyle preference: “you can create the builds and the squads that you want, to express the way you want to win.”

At first, I worried the former tactic was as clearly optimal as it was in XCOM: Enemy Unknown. I was almost never wrong in guessing where enemies would move, which means the conical overwatch zones weren’t much of a hindrance. Rather than try to shoot enemies skulking in cover, then, I found it much easier to skulk myself and wait for them to walk into my killing field, where my chances to hit improved dramatically. Overwatch shots even have a chance to interrupt enemy movements, leaving them exposed on their next turn even if they don’t die.

All overwatch shots and the enemy moves that trigger them are resolved simultaneously, so you’ll see your whole team light up a squad of Locusts all at once. It’s snappy and looks badass – far more so than XCOM’s ponderous slow-mo shots – but sadly doesn’t seem to trigger the dynamic camera. It could look like something out of Starship Troopers – or indeed one of Gears Tactics’ own cutscenes – if the camera would pan across the squad’s shoulders as they fired, pumping rounds desperately into an advancing Locust horde.

And yet for all that overwatch is very effective, there are plenty of situations where Gears Tactics pressures me to take the more personal approach. Target saturation is one: as in the main series, Wretches are the Locusts’ cannon fodder – they come in waves, soaking your ammunition and overwatch actions, leaving more dangerous enemies to act freely. Emergence holes, or E-holes, are craters in the ground from which a wave of Locusts will emerge each turn unless you can get close enough to collapse them with a grenade. 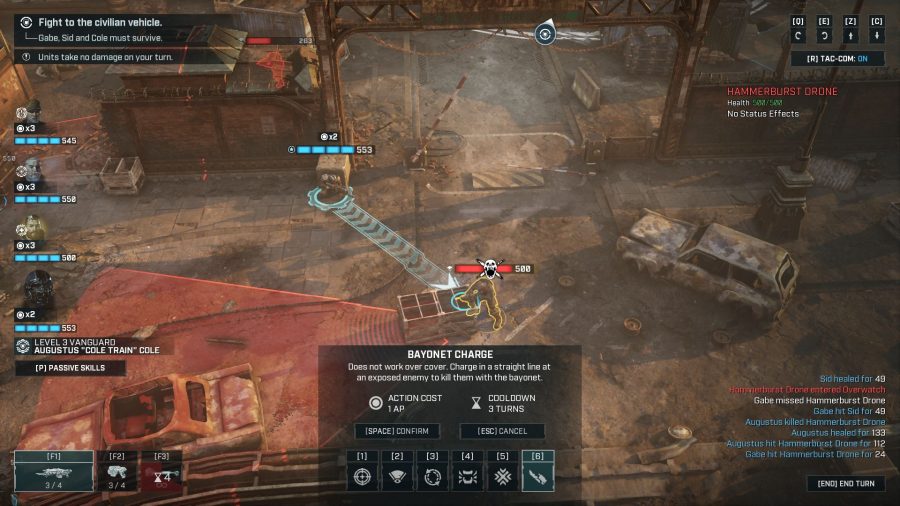 A dicey few rounds of wave defence proves the quality of Gears Tactics’ innovations. Even after a round of overwatches there are too many enemies left standing, and I’m forced to take a few risks. I send the pre-order bonus character, the preposterous yet brilliant ‘Thrashball’ player Augustus ‘Cole Train’ Cole, to bayonet a Grenadier – the dynamic camera snaps to the ground and looks up as he popsicles the unfortunate creature stomach-first.

Cole is now exposed but the remaining three enemies are in range of his Intimidate ability, which removes them from cover, so the rest of the squad should have no trouble mopping them up. Or so goes my theory. Sid downs one, but Cole spends his last action missing an 80% shot on the second, leaving him very vulnerable. After Gabe downs the third I make another aggressive gamble, running him out of cover to execute the second. This gives Cole another action, and this time he doesn’t miss. Had the bad guys got another turn, both Cole and Gabe would’ve been in serious trouble.

What of the main series? Here’s our Gears 5 review

Clutch, as the esports types would say. I never thought a turn-based game would feel quite this urgent, but Gears Tactics has depths that enable you to improvise and to snatch victory from the jaws of defeat, leading to some pretty breathless moments – enemy turns are also resolved quickly, minimising downtime and thrusting you back into the action.

Presentational issues are one of the relatively few criticisms I would make. The in-game camera doesn’t zoom in (or out, actually) very far, which leaves me with a distanced, impersonal view of the battlefield that’s at odds with most modern games in this and related genres. The fact that the dynamic camera is able to take a closer view suggests this is a surmountable problem, but that camera itself isn’t perfect. For every time it takes a cool angle on the action, it will at least as often default to a far less exciting top-down view.

But I don’t want to end on a mean-spirited note. I really like Gears Tactics so far. XCOM is a good starting point, but Gears Tactics is faster, funnier, and more empowering, both in terms of your own lethality and your tactical options, yet it can still challenge you. Gears Tactics is out on April 28.