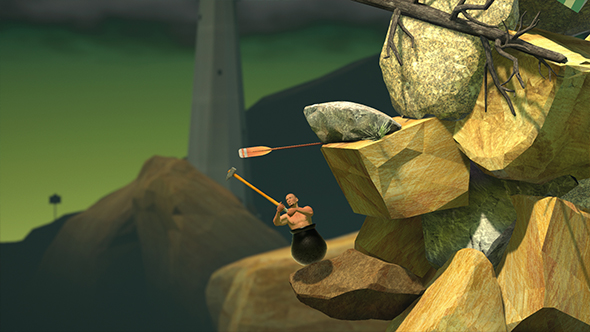 Even though it’s a nearly a decade old at this point, just hearing the name QWOP is apt to make your fingers convulse in keyboard-tossing rage. Such an innocuous game of controlling a runner’s body as they engage in a sprint, yet with so much control over those legs it’s impossible to reign it in enough to make it more than a few inches at a time. Just… a little… argh!

If the memory of QWOP has you itchy for awesome free games, check out the best free games on PC.

If you enjoy that same feeling of rage then there’s a special surprise in store for you from QWOP’s creator, Bennett Foddy. The game’s official description is succinct, but really says it all: “I created this game for a certain kind of person. To hurt them.”

Getting Over It with Bennett Foddy appears to be a game about a man in a pot who attempts to climb a mountain by swinging a hammer around. Yep, definitely checks out for the next thing in the QWOP lineage. The trailer is delightfully confrontational, which is a phrase that pretty well describes the whole Foddy oeuvre when you get right down to it.

The game will be making its debut in the next Humble Monthly Bundle, with a wider release to follow in December.