I always thought there should be a good Ghost in the Shell videogame – I mean, the literal translation of the Japanese version of the manga is “Mobile Armoured Riot Police”, and I’m frankly surprised there isn’t already a game called that.

It’s a cyberpunk future filled with nefarious corporations and cybernetically enhanced people, and we know how much videogames love those. Also, guns.

Ghost in the Shell: Stand Alone Complex – First Assault, a new FPS published by Nexon, seems to be focusing on the gun bit. Sharing the world and visual styling of the classic manga, First Assault is an online shooter where you take on the role of one of eight augmented soldiers and work together to shoot people in the face.

It looks pretty fast-paced, with agility a big part of the action. You’ll also be able to use some abilities from the anime, like cloaking so you can move to a flanking position unseen. 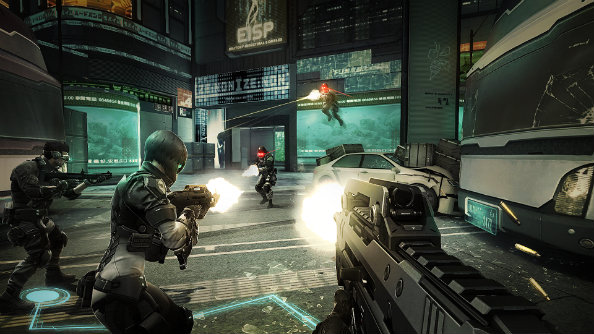 “Players will carry out battle strategies and formations as they choose from among eight initial characters,” said Nexon. “Adding a unique layer to the experience, each of these can be customised with specialised body augmentations, weapon attachments and enhanced abilities.

“First Assault also features ‘SkillSync,’ which allows players to leverage shared cyber-abilities with nearby teammates in combat modes to augment and increase their skills. By using SkillSync in smart and tactical ways, teammates can work together in devastating combinations in battle.”

It sounds like it could be pretty tactical, and if you want to find out for yourself you can sign up for the beta, which runs from October 1 to October 4.

It’s due for release in 2016, and you can watch the Imagine Dragons-backed trailer below.