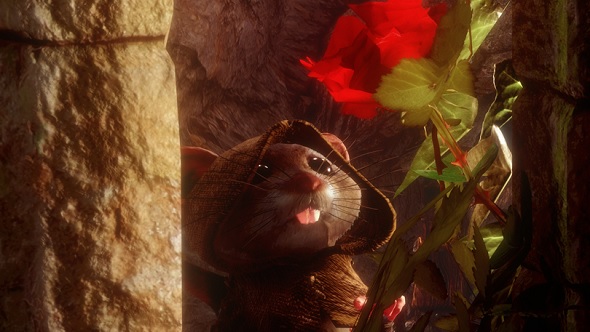 The word on the tip of everyone’s whiskers in Ghost of a Tale is scrunt. It clings to the end of sentences whispered out by a pair of thieving mice: “You cheeky scrunt.” A rat guardsman who enjoys a game of cards coughs it up through mouthfuls of fish and pastry: “Leave me alone, scrunt.” Pray for that ‘s’ and ‘r’, for they are all that holds Ghost of a Tale’s pre-teen age rating flimsily to its bushy brown fur.

Want another indie game recommendation? Try out the hilarious Chuchel.

Scrunt is an archaic word for beggar, a term used as an insult, but one that probably sounds harsher to our modern ears than when it was spat out through medieval lips. The game’s lore book seems to disagree. It describes scrunt as “a word too rude to define.” When it is croaked out in the first hour by an old pirate frog you find in a prison cell, his head and feet in stocks, it is the first sign that there is something darker hidden beneath Ghost of a Tale’s beautiful veneer. 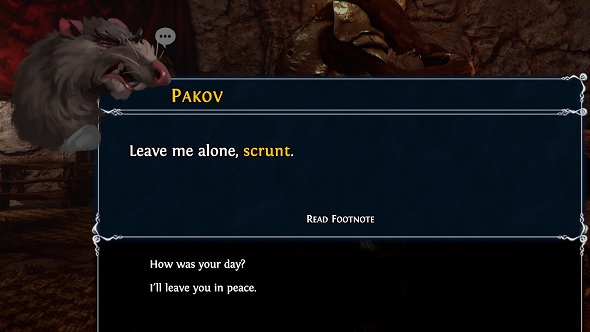 This should be a fairy tale. The story sees a mouse minstrel escape prison, outfox the ratty routines of a military barracks, and seek the help of ghosts as he tracks down his abducted wife. Beyond this there is a sense of a larger world. Mutinies, great wars, and the squabbles of rat politics are mentioned in conversation and enriched in the lore book. There is talk of ferrets dancing at balls, badgers who built the towers you ascend, legends of pirates and shipwrecks and buried treasure. The fantasy deserves to be expanded beyond this single game.

What is more impressive is that it is brought to life almost single-handedly by Lionel “Seith” Gallant. He is a veteran animator who previously worked at DreamWorks and Universal Studios on The Prince of Egypt and Shark Tale. Ghost of a Tale has the hallmarks of a film made to gather kids on living room carpets so their parents can catch a break, then. But there is more to it than that.

Mice, as they are drawn in fantasy, are small round-eared peasants that do little harm. Ghost of a Tale plays up to that brilliantly at first, drawing you in with its adorable, fidgeting lead – Tilo, a bold mouse who plays a lute and sings for a living, but is downtrodden by the rats that rule the kingdom. Your first task is to lead him out of his prison cell, gingerly sneaking past his captors, their predictable patrol routes and short attention spans making for light work – no more complex than 1998’s Metal Gear Solid. Stealth game gold this is not.

Later, you dress Tilo in armour so he can freely walk among the rats, rather than running from them and hiding in barrels until they get bored of the search. There are other costumes, too – thief, pirate, ranger, king – that you collect by the part, and which promise a game about dressing up to gain new abilities. That game never arrives; there are no new abilities to unlock and the costumes are only vital in a couple of quests. It is a big disappointment. Instead, the outfits are best used in hotchpotch fashion. My favourite: a knee-high red boot here, a white neck ruff there, and an eyepatch to finish it off. Get out of the way, Tyra Banks, this is the killer catwalk look this year, girl. 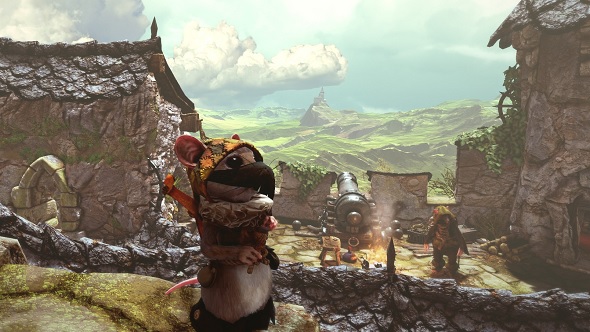 You mix the outfits up to increase Tilo’s sprint speed and stamina recovery so you can hasten all the running back and forth you have to do. There is a lot of it. If you were to trace on to the game’s maps every journey that Tilo has to make between each character and item you would not be able to read them. And yet, while this does sound tiring – and it is in the game’s sprawling final act – there is an appropriateness to it: I am a mouse, mice scrabble around in small spaces to hunt for crumbs and safety, this is what I am doing.

When you are deep into Ghost of a Tale, what stands out is not the fur or the threads, but the stonework. You get to learn the ramparts and ratholes of that military keep as a mouse would the insides of a pantry. Rather than experiencing a fairy tale you find yourself steadily gnawing through the subnature of medieval life. At first you scuttle long distances or play peek-and-go between them, but you soon discover delightful shortcuts: hidden passages through the walls, ladders and pulley systems that bypass stairs. You press your mousey face against the dust, smoke, weeds, and debris, evading open spaces like the plague and sticking to the subspaces where you can move without trace. It is a decidedly rodent way to be. 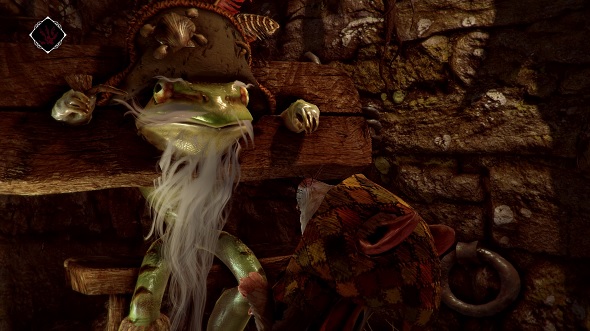 I got so familiar with the masonry and woodwork that, in time, there seemed to be an odour accompanying each spatial experience. Outside in the grassy fields and along the sandy shores I imagined the smell of plants and the bracing scent of salty air. Pleasant enough. But down in the dungeons and sewers there was stench that made my nose screw up. This synaesthesia progressed to the point that when one quest had a frog force a key out of his green intestines, Tilo putting his hand into a grubby chamber pot to retrieve his prize, I actually felt a little sick. The taste! There is no better testament to the quality of the textures and sounds in this game – whether it is going for adorable or wretched.

Ghost of a Tale shocked me with its first bark of the word scrunt. But, by its end, I had dragged Tilo through leech water, had him sober up a soused rat, and cured a nasty case of tail necrosis. I dunno what else you call a creature that deals in such putrid work.