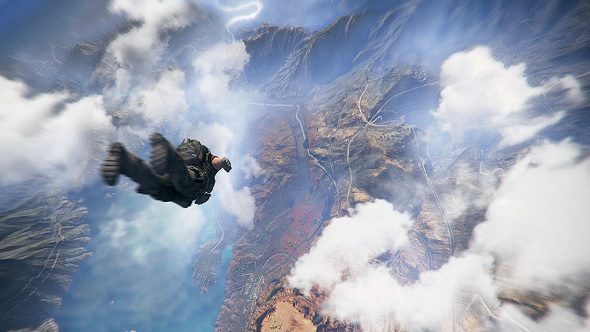 Following the release of its odd cat-themed live action trailer, Ubisoft have shown off footage of a new extraction mission for Ghost Recon Wildlands. This operation sees four Ghosts working together to capture a cartel member manufacturing drugs.

If you want some more co-op action, check out the PC’s best co-op games.

The mission has one Ghost coming in from the surrounding hills, using a nearby watch tower to scout potential threats and shoot out enemy snipers that could kill friendly Ghosts or raise a base-wide alert. Upon taking out the sentries, three Ghosts in a helicopter fly over to do some further reconaissance of the base and confirm the target. You can tell there has been some clear inspiration from Metal Gear Solid V, with Wildlands’ focus on spotting enemy targets to notify allies of potential patrol paths and so on.

Upon confirming their target, it’s simply a matter of one Ghost skydiving down to the base, shooting out the roof and kidnapping the drug manufacturer. The helicopter provides an ample distraction, lighting up the now alerted guards with minigun fire. There is clearly the potential to have some great moments with a well-oiled team in Wildlands, but I can’t help think that most extraction missions will turn into mayhem within a matter of seconds, especially if you’re playing with randoms.

With the target and all the Ghosts safely in the chopper, it’s a matter of quickly exfiltrating the site and maybe firing off a few missiles as a parting gift. All in a day’s work for the members of Ghost Recon.