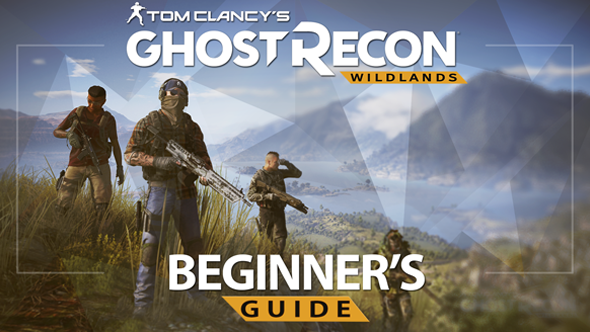 Ghost Recon Wildlands is out now, and after many hours in the jungle and dirt roads of Bolivia, we already have a handful of tips to help you thrive in its sprawling, jam-packed world. Taken all at once, the game’s mechanics and systems, combined with its icon-heavy world map, can be overwhelming. Break it into chunks, though, and it starts to make sense.

Related: here’s everything we know about Ghost Recon Wildlands.

So, from levelling your squad to finding new gear, below is a guide to getting everything you can out of the game’s opening few hours. 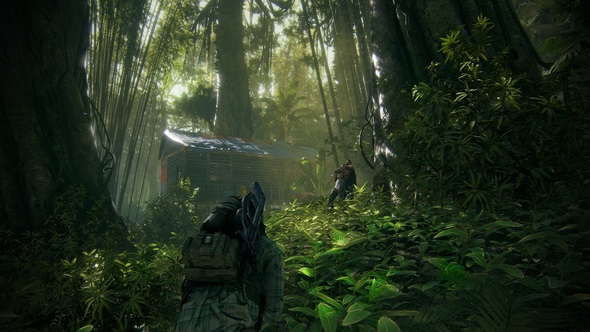 Wildlands’ enormous map is divided into 21 districts and the objective within each is to force a local cartel boss out of hiding and then assassinate them. By collecting intelligence (marked on your map as a small brown dossier and generally guarded by only a handful of enemies) you unlock the bigger, more difficult story missions.

So, there are two ways you can about each district: either you collect all the intel and then finish the story missions on the bounce, before facing the cartel boss proper, or do them one by one. We recommend the latter. Intel folders, typically, are located right next to story missions, so instead of traipsing back and forth around the map, doing the main jobs one-by-one carries you and your squad along a natural route around each district. Also, story missions often result in areas of the map becoming cleared out of all cartel goons, allowing you to freely access other goodies, which we’ll get into later, and fast travel between a greater amount of waypoints.

Side-missions however can be very tricky. Be particularly careful of the ‘convoy’ assignments, wherein you have to stop a truck of cartel supplies from reaching its destination and put down its entire escort of armed guards. In past Ubisoft games – and in games generally, actually – missions like these are straightforward. Simply pile your car into the target vehicle then hop out and gun down the remaining enemies. But in Wildlands, especially at the game’s beginning, the guys guarding the convoy trucks are much better armed than you are and move very, very quickly. Simply pulling up alongside the convoy and ordering your squad to open fire – which you can do with a single press of the F key – almost uniformly results in failure. A better tactic is to finish the first two missions, bump your character to level 2 and use one of the in-game hubs to purchase C4. Pull in front of the convoy (the 4×4, strangely, seems to be one of Wildlands’ fastest vehicles, though you can also hijack a sports car) and lob a couple of charges into the road. Order your squad to ‘fire’ – again, by holding the F key – and when the lead car rolls over your C4, hit the detonator then watch as your buddies neatly pop a bullet through the truck’s windscreen and into the driver’s face. 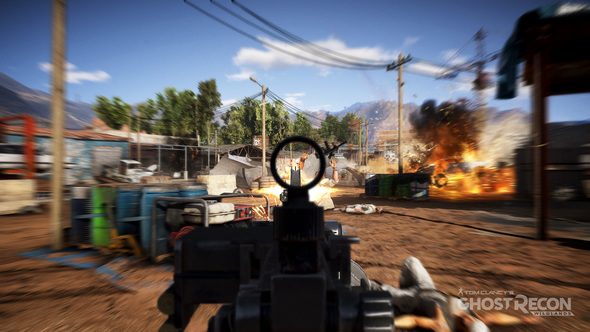 On your mini-map, you’ll often see nearby areas highlighted either orange or purple. Orange means there are cartel soldiers nearby. These are basic grunts and you and your squad ought to be able to take them out easily enough. The all-important ‘fire command sends your team-mates pretty much off on their own – the fussy order system from previous Ghost Recon games has been streamlined in Wildlands, and each of your AI comrades operates pretty much autonomously, fanning out across a wide area to pop bad guys you yourself may not have spotted.

More dangerous, though, are the UNIDAD private contractors, denoted by the purple map splodges. These guys have armour, shields, snipers and tend to gang up on you. And when you’ve sent your three pals off on their own, that can spell a quick death. So approach the orange areas with confidence, the purple ones with caution. Stick together, use the ‘regroup’ and ‘go to’ commands to move your squad slowly and try to find the UNIDAD troops, using either your binoculars or the small, remote controlled drone (don’t fly it too far away, or it will lose signal) to mark them on your map before engaging.

Keep in mind: enemies in Wildlands are oddly tenacious and will follow you, either on-foot or in vehicles, long after you’ve left a gun battle. Particularly if the cartel or UNIDAD call for reinforcements, you can find yourself being rammed off the road or shot in the back when you’re least expecting it. Keep an eye on the top of the screen for orange or purple lettered warnings about incoming backup. Don’t try to run. If you can lead your pursuers onto a narrow road, just wait for their cars to pull up and fill them with bullets before they get out. Once again, the most useful command is ‘fire’, but although they disperse and take care of a lot of your problems for you, it’s worth sticking close to at least one of your squad-mates in case you get killed. If they can reach you in time, they’re able to revive you. Better yet, get online and play with a trio of friends. That eliminates the still occasionally fiddly command menu and lets you organise attacks in more detail, particularly useful when taking on the big, UNIDAD compounds. Lastly, keep away from districts that have a high star rating. The more stars, out of five, the tougher the district’s enemies. 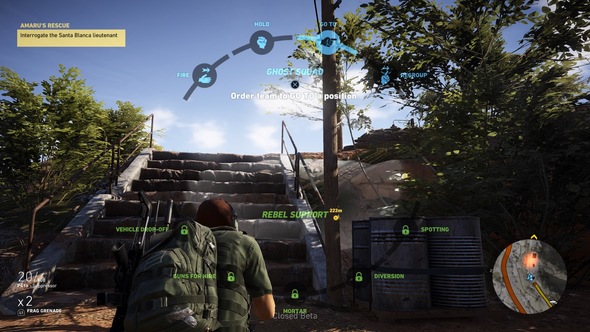 There is one golden rule to choosing your equipment in Wildlands: use a suppressor. The game will warn you that putting a silencer on your gun reduces its damage stat, but the cartel soldiers go down with just a few shots anyway, and if you use an unsuppressed weapon, as we mentioned earlier, dozens of them will come out of the woodwork and start attacking. So long as your silencer is attached, your whole team will use them, too. Basically, there is no downside.

Another good idea is to pour experience points into the ‘drone’ upgrade path early on. That way you can use it not just to scout enemies but drop bombs and place C4 charges, particularly handy when going after the big, UNIDAD bases. The ‘weapons’ levelling path is somewhat useful, but most of your arsenal can be found in collectible crates out in the field or accessed naturally as you level up, so don’t worry too much about unlocking the big guns manually. It’s a bit of a drag, but especially after you’ve cleared out a district it’s worth going over it a few more times and scouring the map for hidden weapon caches. Finding these (a lot of them are located inside enemy bases, to help narrow your search) will unlock scopes, silencers and other attachments for your guns.

Another small piece of advice: unless you’re a stickler for the first-person perspective, we recommend switching to the over-the-shoulder, third-person aiming for most gunfights. It’s more stable and allows you a little more leeway – aiming a couple of inches wide of your target still usually results in a hit. Trade out your sub-machine gun for a sniper rifle or a shotgun (since you begin the game with an assault rifle anyway, the puny MP5 is pretty much unnecessary) and make sure you unlock the ammo capacity upgrades, since venturing back and forth between resupply hubs can be a chore. 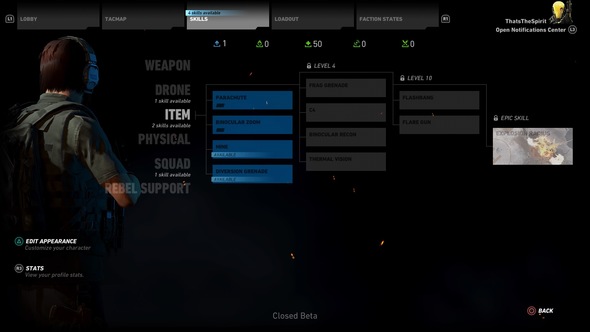 There are several level up categories in Wildlands. You can improve your weapons and weapon abilities, personal characteristics like health and inventory space. Then there’s your drone, your driving skills and of course your squad. In the early game, it’s worth devoting your experience points both to your own character and your team-mates. For basic survival purposes, give your squad bigger health bars and increase the amount of time you can survive, and wait for a revive, after being wounded. Another canny choice early on is levelling up vehicles so they can take extra damage. That will help with those tricky convoy missions we mentioned earlier.

Levelling however isn’t simply a case of finishing missions and collecting their XP rewards. Dotted around the Wildlands’ world are myriad supply caches, ranging from fuel to food and medicine. To progress through the character levels you’ll need to have acquired the requisite amount of each of these resources – at the top of the customisation screen, green icons will indicate whether or not you have enough oil, food and medical supplies to advance to the next level. Like collecting weapons, this means scanning the map for hidden provisions. Enemy bases typically contain food and medicine. The convoy trucks and a lot of the small, cartel-occupied towns you’ll run across are often loaded with fuel. Having to find these items means levelling up in Ghost Recon Wildlands is a slow, hard-fought process. Choose each of your customisations carefully and decide early on which level tracks you want to pursue and which to ignore. Unlike Far Cry and Watch Dogs, it’s difficult in Wildlands to be a jack off all trades.

So our advice is to orientate your upgrades around you squad-mates and yourself. If you have a robust team and moderately advanced selection of gear, more or less any of the challenges that Bolivia throws at you (and there are many!) will be surmountable.

Those are our pearls of wisdom for staying alive in Bolivia – what are yours? Let us know below.