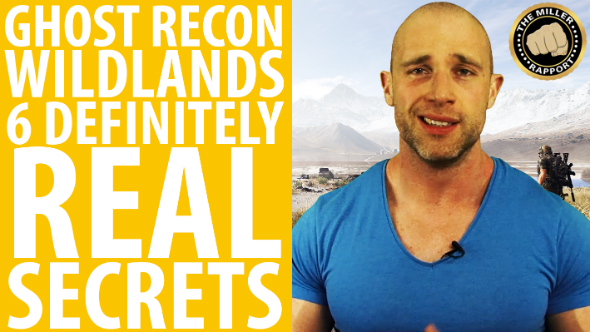 If there’s one thing gamers have had to guard against since the very dawn of triple-A game development, it’s marketing mistruths. Simon Miller takes this very seriously indeed, and has dedicated this week’s video to separating fact from fiction in Ubisoft’s latest exotic shoot ‘em up, Ghost Recon Wildlands. He definitely hasn’t made any of these up for the sake of having something to get all angry and veiny about.

Debating whether to buy the game on PC? Check out our Ghost Recon Wildlands tech review to see if it’s a worthy port.

So, what exactly have Ubisoft been secretive about? How about the total absence of ghosts, huh? And then there’s the setting, which is supposed to be a blend of Netflix’s Narcos and real-life Bolivia. Well, guess what? Bolivia has cities with tarmacked roads, and Narcos has a story that’s engaging and compelling. You can also expect the usual assortment of nerd-bashing jokes and references to Hulk Hogan – it’s The Miller Rapport, after all.

To support Miller directly, head on over to his Patreon page. For more moving pictures as entertaining as this one, why not subscribe to PCGamesN on YouTube? Apologies in advance: the rest of us aren’t quite as sculpted as Miller.