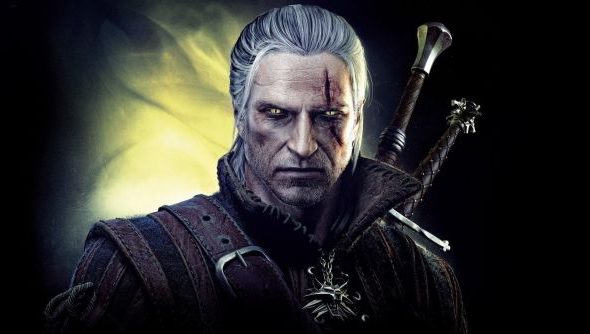 A huge update to Witcher 2 is inbound from one of the games own designers. Combat has seen a complete rebalance from stats to brand new moves. It aims to tighten up a myriad of animations and add new ones. All for a game that’s over two years old. Respect.

The prominent modder, Andrzej Kwiatkowski, is currently working for CD Projekt as a gameplay designer. This mod was created during his spare time, whilst his day job was working on the Witcher 3. The update is due out within the next two weeks. I’m rather glad I put off playing Witcher 2 until now.

Here’s the patch notes, prepare yourself:

Up to 80% increase in responsivness per Geralt’s animations.

Up to 50% increase in repsonsivness per NPCs animations.

Added strafing while being locked on an enemy and walking.

Geralt and his attackers are no longer bouncing off parry. It allows to continue attack sequence.

Monster attacks still cannot be parried with a sword.

Above listed changes to defence mechanics decreased importance of rolling in combat.

Decreased the number of skill to ensure quality over quantity.

Geralt now starts with core witcher skills already learned. No need to go through Training tree before unlocking other branches.

Removed many passives from skill tree to replace them with more active abilities. Remaining passives are changed to make them more attractive.

All skills now have one level ( previously 2 ).

Aard and Igni Signs have been changed from projectile to cone area of effect.

Riposte doesn’t require Guard Stance to activate, only attacking in a timed window.

Experience points are given only for progressing through quests, not for killing enemies. This encourages role-playing without worrying about missing experience.

Geralt no longer buys witcher specific recipies from random merchants. He recalls lost memories as a part of character development.

Each enemy is balanced according to his constitution, combat skill, combat style, weapon and armor type. Following this pattern allowed to created consistent rules that every character follows. A barechested bandit won’t survive more hits than a knight in platemail just because the bandit was encountered later in game.

Decreased the disproportion in stats between starting equipment and late game equipment.

Moved the weight of character power from equipment to character development. Learned skills should have as big impact on Geralt’s badass factor as items.

Items imported from The Witcher savegames are of the same quality as in the first game. An exceptional armor and weapon remains valuable. This makes the game easier, but it is an intentional reward.

Removed Fatigue penalty that decreased sword damage and damage reduction on block when Vigor was spent on Signs or Parry. It discouraged some players from using Signs becaused it decreased Geralt’s sword DPS.

Silver throwing daggers are considered as silver weapons for damage calculations against monsters.

Inceneration, Bleeding and Poisoning effects are allowed to be active at the same time.

Made quest experience rewards more consistent. There are no longer any situations where player is rewarded with 50 experience points for one quests and 2000 for another.

Made moral choices in quests equally rewarding in terms of experience and items. Players should be encouraged more to role-play instead of weighing quest rewards.

Changed rewards for gaining knowledge about monsters to monster specific oils for swords.

Set minimal damage dealt by Geralt to zero ( was 5 ).

Decreased the number of armors and weapons present in game. Amount of equipment is adjusted to provide smoother item progression without making huge amount of items useless stat-wise.

Weapons and armors that are present in the game were picked according to these rules: visual differentiation, witcher low level magic setting. Some items available in game assets but not used in original game were reintroduced.

Moved more quality items from quest rewards to shops and distributed them among Chapters. Player should be encouraged to regulary spend money in shops.

Decreased buying cost of swords and armors. Player should be able to buy items more often, not hoard money.

Removed some of the junk items from container definitions.

Made vendors specialize in certain type of merchandize.

Witcher specific recipies cannot be bought but also cannot be sold to merchants.

Enemies explode when killed by mage spells. Does not apply to witcher Signs – they are not that powerful.

Made finisher animations which use Signs unlocked by upgrading Aard and Igni in character development.

Removed cutscene swords. Geralt will use his currently equipped sword in all cutscenes.

Equipped enemies with swords according to their social status, wealth and current situation in the game. For example, soldiers patrolling areas near ghost fog in Act 2 are equipped with silver swords like the story suggests.

Decreased camera shake effect used on each step of huge creatures like trolls and golems.

Tweaked anim events in all combat animations to improve timings and responsivness.

Fixed a bug where Geralt was always doing 2 more steps after roll before stopping.

Many, many other changes that were required to make features listed above work.