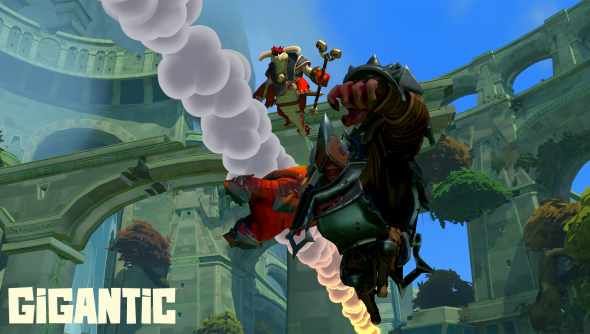 James Phinney is at the helm of Gigantic. Lead designer on the original Starcraft and Guild Wars, he was never going to make moba that played like the competition.

Phinney’s moba has no creepwave, no homebase nexus, and no item system. It has hippogriffs, dragons, robots, and a whole lot of strategy. It’s all played in third-person, too.

Every round of Gigantic ends with two massive legendary creatures tearing each other apart while players shoot, stab, and immolate each other in their shadows.

Founded back in 2010 with $20 million of private investment, Gigantic is Seattle-based Motiga’s debut game.

Despite the studio’s relative newness, it’s staffed up with veterans of the games industry. Founders Chris Chung and Rick Lambright were the CEO of NCSoft and technical director of Vivendi, respectively. They’ve picked up veterans from around Seattle, including Arenanet, including artists and animators responsible for the game’s gorgeous announcement trailer.

Then there’s Phinney himself: lead designer and producer on the original Starcraft. He also had his hand in Warcraft II, and Diablo before becoming the lead designer on Guild Wars and design director of ArenaNet.

When I Skype Phinney it’s 8am in Seattle. He looks shattered from working late the night before. His fatigue fades as he explains how Gigantic works and the creatures that sit at its core.

The game itself is a third-person action moba. Closer to Smite, than Dota 2 or League of Legends. Combat is fast-paced, control is direct: you’re not clicking icons to fire a skill-shot: you’re aiming and firing a bow and arrow.

Your goal is to kill, the enemy guardian; vast, AI-controlled creatures who spend the match protecting their lair until you collect enough power for them to go on a rampage.

Your home nexus isn’t an inanimate, vulnerable structure. It’s a giant, hulking beast that will tear you limb from limb. There’s no creepwave feeding players with experience and gold. Instead single powerful creatures, summoned by the players, prowl around key points of the map. 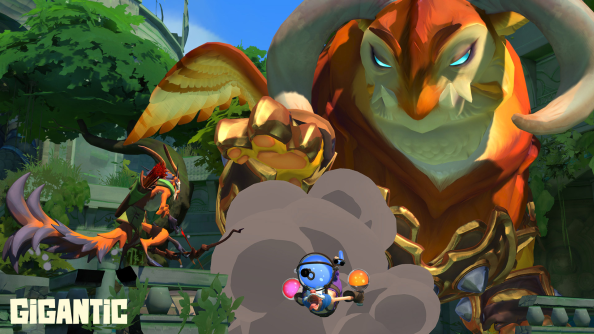 Each House (clan) has its own Guardian that can be picked and customised, both in what it looks like and how it fights. All your objectives within Gigantic produce power, claiming capture points, summoning creatures, and, most importantly, killing enemy players. When you collect enough power your Guardian will burst from its lair and rampage across the map, killing players and smashing up parts of the level, ending by punching the opposing Guardian in the face.

Phinney’s team have filled this basic structure with strategic possibilities.

Each rampage sees your Guardian reshape the map in your favour. A defensive rampart which blocks access to the enemy lair can be crushed down to become a ramp. Bridges giving the other team high ground over a capture point can be torn down, taking their advantage and giving you a low rubble barricade. Successive rampages take your Guardian to new spots, building a momentum towards the endgame.

“It takes a lot of damage to wound a vulnerable Guardian. There’s only so many spots you can be in to attack that thing when it’s down.” Phinney explains. “Sometimes when you lose that rampage your team can take the opportunity to get map control to get in a better position.

“You have to figure out how much you’re committing to getting that wound.” 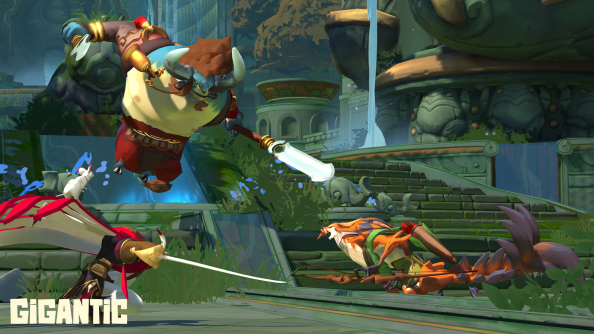 You can even steal power from the enemy guardian by attacking it in its lair. However, doing so isn’t easy. “When you sneak into the enemy lair and attack that guardian it’s big and scary,” Phinney tells me. “You’re going to have to hide behind terrain, dodge around, and get its pattern else it will smash you pretty quick. When you start your attack the enemy team can see what you’re doing and pull back to their spawn, but doing that opens up parts of the map to your team. That interplay and those options are a big part of what we want to do with that.”

Dotted around the map are capture points you can take control of by summoning creatures to guard them. Every creature will fight enemies that enter its area but they also radiate an aura that affects your team, doing anything from healing you to buffing your attack or, in the case of the cerberus, it will paw around the capture zone sniffing out cloaked enemies.

“You can try and cover the entire map with health regeneration,” Phinney says, explaining how wide the radiuses can become. “A lot of the aura’s stretch to the next summoning spot so figuring out the pattern of your summons is important.” Parts of the map will resemble Venn diagrams, places where health regeneration, attack and speed boosts all overlap.

Summoned creatures grow as you play: early versions begin as children, but are replaced with adults later on. A fully grown cerberus will be tougher, do more damage, and its decloaking radius will be much wider. There are also variants of each creature. For instance, a shadow cerberus is stealthed and can detect enemies.

When a Guardian is down to its last wound or the match has gone on too long both Guardians erupt from their lairs and travel to the centre of the map for a final clash,” Phinney tells me, getting excited. “You still need to build power for them to initiate their attacks and whichever team builds power first will knock the other guardian vulnerable.” You then need to pounce on the weakened enemy Guardian and strike the killing blow.

“Killing enemy players is still the fastest way to build power,” explains Phinney. “Even with the Guardians we’re not trying to detract from the PvP.” 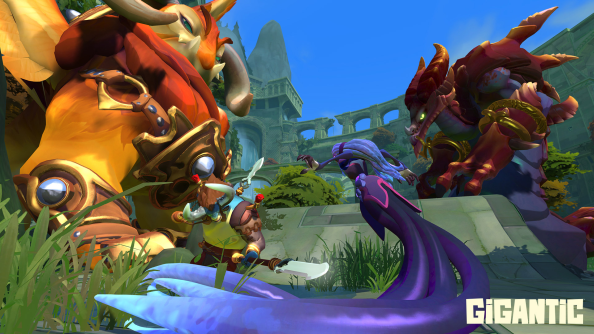 Gigantic fiddles with heroes, too.

Each hero in Gigantic has four standard abilities – mapped to the left and right mouse buttons, and ‘Q’ and ‘E’. There’s a much more powerful ability tied to the ‘F’ key, this focus ability is charged up by combat, acting as a drive to push players into fights.

There are traditional ranged characters, like the archer Imagi and HK, a turret droid armed with a chain gun, which shooter fans will be comfortable with. But there also Voden, another archer, who can summon a decoy of himself and create poison clouds. “He’s designed for RPG players because of his skill interactions,” says Phinney.

“As you level up from one to ten you get to choose upgrades for every one of those skills,” Phinney details. So, Imani the archer’s Boom Bolt can be given a larger blast area or its damage can be increased. “Its designed to not just be numerical but change the functionality of the skills and give you room for how you play.

In Gigantic, some of the ability upgrades can fundamentally change how a character works. For instance, one character, Tyto the Swift, his right-click skill is a leaping attack. You can upgrade it to increase the damage and area of effect or you can take it down a branch where it stops being an attack at all. You can use it twice in a row and it gives you a speed boost.

Phinney hopes this variety of character progression will give players the freedom to customise how they play without resorting to items. 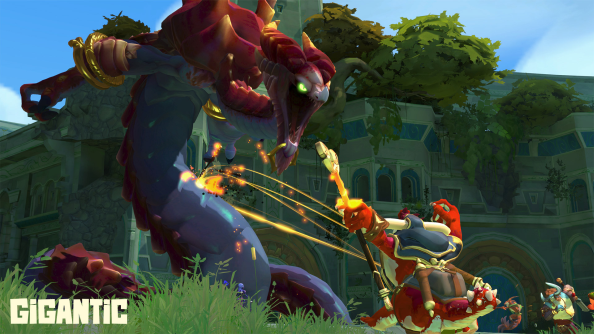 The final shift from the traditional moba format is a shift in perspective from isometric top-down to an over the shoulder third-person camera. They have a level of verticality you can’t have in a top-down game. Snipers can get up high, boosted by special movement abilities, and spot enemies from their overwatch position. Melee characters can get the drop on players encroaching on their territory.

Maps are based around the “different areas to hold, the areas where you can send creatures, and most maps will feature branches at some points,” Phinney explains. “At any time we want there to be the threat of attacking the enemies’ guardian and the threat of going in and taking out the enemies’ back line.”

Lots of the characters have abilities that “make walls and areas that buff allies or debuff enemies or have abilities to give movement bonuses to allies,” says Phinney. The Margrave is a pure melee tank character. One of his abilities is a spinning flail attack that deflect projectiles. Going into an area with Margrave in front of you, knowing that attack’s not on cooldown, is a really nice interaction.”

“Uncle Spanner, our alchemist character, has a ‘q’ skill called ‘Elastic Ooze’. It creates this platform of bouncy goo that, depending on what upgrades you take, can slow down enemies that walk through it, or bounce people away. You can run onto it as an ally and jump really high.”

Gigantic’s is set to release in 2015 but, considering Motiga’s planning on launching the European closed alpha test on 17 December, its full launch is likely to be late in the year. You can still sign up for the chance to take part in the alpha tests on Gigantic’s site.