If you’re into MOBAs but aren’t playing Gigantic yet then we need to turn that round. What’s great about Gigantic is that it manages to stand out among the crowd: not only is it a third-person shooter (rather than an isometric clicker), it’s all about the huge Guardians the title refers to, which battle alongside and against your team.

The idea of each 5v5 match is to power up your Guardian so that, when it does battle with the opposing Guardian, it isn’t the one that’s slain. You power up your Guardian by killing enemy heroes, creatures, and collecting orbs. In order to do any of those you’ll need to work with your team to strategize and complement each other’s abilities.

To be honest, the best way to find out what makes Gigantic different to other MOBAs is to play it yourself. Click on the image below to jump into the game. 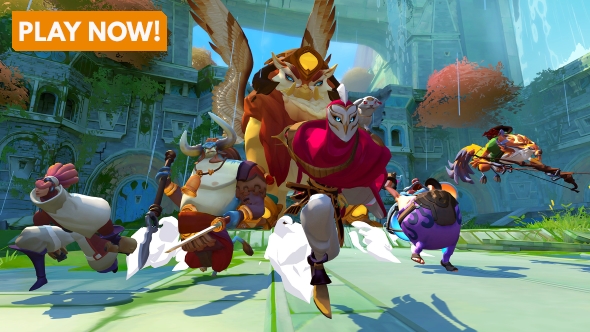 However, before you do rush off to have a good time, you should also enter our latest giveaway competition. We have 20 Ultimate Packs (worth $29.99) for Gigantic up for grabs. Included in each of those is the following:

To be in with a chance of winning,all you need to do is complete one of the actions in the widget below. You’ll also need to download Gigantic in order to redeem the code. Best go ahead and do that now so you’re ready!We’ll also need your email address so we can send you a code upon winning – we won’t send you spam, we promise.