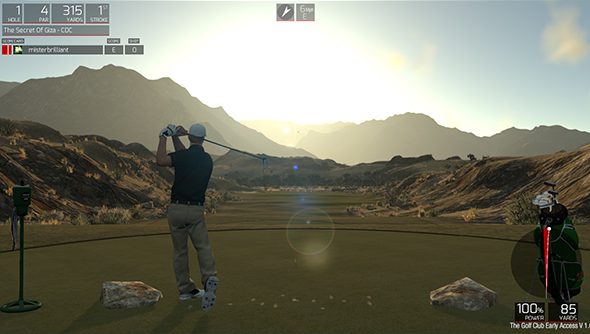 After some testing I have figured out that the nice man who commentates over The Golf Club stops reading out your score after you reach about 20 over par. I’m guessing the developers didn’t bother to have him record all of those extra lines, in the mistaken belief that nobody could be as bad at a golf game as I am at this golf game.

The Golf Club is currently in Early Access on Steam, launches properly tomorrow and deserves a much better player than me. It’s definitely good though. I can at least tell that it’s alright. So here, without deviating from the basic facts of the game in some futile effort to hit wordcount without betraying my ignorance of the sport, are some reasons why.

The name ‘The Golf Club’ is itself a very clever pun, containing a dual meaning within the word ‘club’. The first meaning is that of a society, organisation or other such group of individuals united in a shared interest, for example, golf.

This is appropriate as many golf courses require that players first pay membership to a club before they are permitted to play. Also, the house that these players hang out in telling their golf stories and smoking their golf cigarettes is called the club house, or clubhouse. Non-members found inside the clubhouse are often shooed away by the more insular golf club members, heckled with withering put-downs such as “get out of our golf clubhouse please, you no good non-member.”

In this interpretation of the game’s name, The Golf Club would appear to be about a society of golfers. It could be anything from a point and click adventure about a putter going missing in a clubhouse, in which all the members of the golf club are suspects, to a game about playing a round of golf (which is what it is). But there is another interpretation of the game’s name. 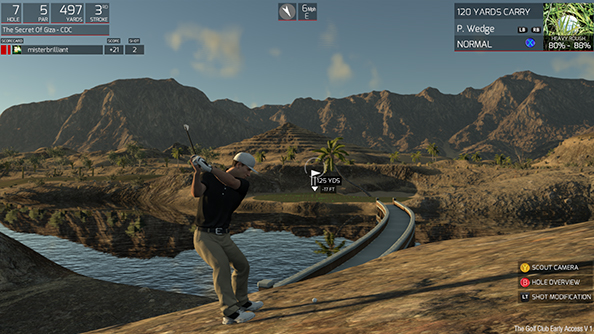 The second meaning of ‘club’ in the name ‘The Golf Club’, is that of a heavy stick, usually blunt and weighted at one end and most commonly used to hit things or people. But what sort of stick are we talking about here? There are, after all, so many kinds. Well, if we simply pull back from that single word ‘club’ to include the noun modifier ‘golf’ that precedes it, we get a far less ambiguous reference to the physical item used to hit golf balls in the game of golf. A ‘golf club’.

It is not these two individual definitions of the word ‘club’ alone that makes ‘The Golf Club’ such a curious name for a game about golf, rather it is the resulting conflict of thought that takes place in the brain when faced with these dual meanings, both of which are aposite titles considering the contents of the game. One can only imagine that the developers have deliberately exploited the two possible meanings of the word club for humourous effect here. And how! 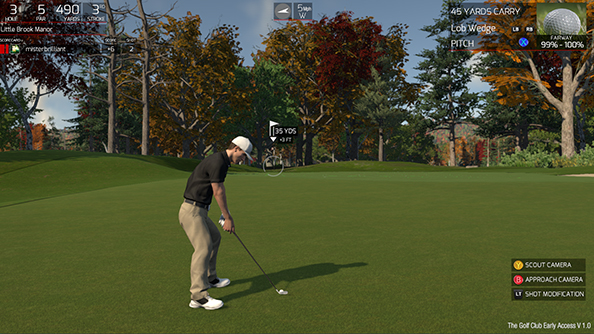 On easier holes the AI caddie will leave you pointing in the correct direction and holding the correct club 99% of the time. On tricker fairways however, you’ll need to utilise a scout camera to observe any hazards ahead and then shorten your aim accordingly. The result is that at lower difficulty settings The Golf Club is dumb fun, with tactical play only introducing itself later. On the introductory course, I could sometimes manage par by dumbly thwacking the ball in the direction the computer was telling me to.

On all difficulty levels however, the challenge tends to increase on the approach to the green. Putting takes practice, as the strength of your putt is determined by how far back you swing your club, with no indicator as to how the two are correlated. Unless you’ve actually played golf, learning to putt here takes mountains of trial and error. Take that as a positive check in the realism column.

By far the most enjoyable aspect of The Golf Club however, is the friendly commentary from a lovely man whose name, I think, is ‘John’. Far from a bombastic sportsbox pundit, he’s a chummy sidekick whose warm and intelligent banter brightens the otherwise clinical environment of the game. He’s clever, sometimes commenting mid-shot that your ball is bound for the fairway, only to correct himself when it ends up in the rough. He’ll read out from your scorecard, not just noting your current score but recognising whether it’s falling or increasing. He’ll even utter well timed gasps as the ball skirts past the flag.

Importantly, he doesn’t try to crack wise or say anything too out of the ordinary, and so after hours of play he remains a delightful voice in your ear. Easily the game’s highlight. 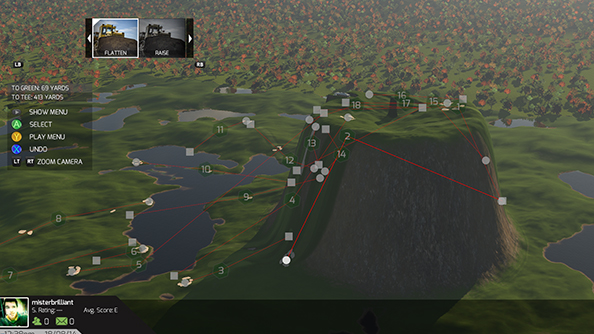 A feature that most people are probably more likely to enjoy is the game’s comprehensive course editor, which for some reason is associated with a Crocodile Dundee lookalike called Greg Norman. Greg Norman’s Course Designer can summon up a fabricated course on a chosen terrain within seconds, with sliders denoting the number of trees, hills and water hazards to include. From there you can fine tune any of the 18 generated holes and fling the resulting creation online for others to play.

Online courses, tournaments and tours are ranked by other players and sit alongside a roster of official courses designed by the developers, so you know which ones are guff and which ones are worth popping your fingerless gloves on for. The editor is powerful enough to allow you to create properly silly courses too, such as the unplayable monstrosity I’ve designed above.

Despite feeling more than a little barebones, there’s a solid foundation of a golf game here that dispenses with the flashy UIs and player customisation. Fans of the sport may miss the frills and pinging power bars to which they’ve become accustomed in other titles, but by opting instead to distil the act of swinging a thing to hit a thing into a thing down to its rawest essence, The Golf Club feels uniquely focused. That, and it has a rather good name too.