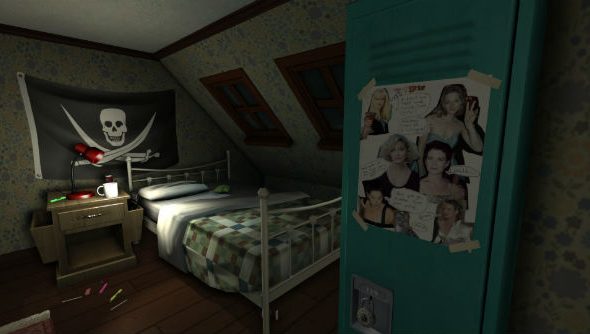 It seems fitting that upon Gone Home’s release in the summer of 2013, The Fullbright Company threw a house party to celebrate. Gone Home, Fullbright’s debut venture into the world of independent development, tells an enthralling tale of love, life, family and relationships as the player leads 21-year old-protagonist Kaitlin Greenbriar around her seemingly abandoned family home in search of her absent relatives.

Littered with sticky-note memos, audio cassettes, answer phone messages, and ostensibly innocuous diary entries – consistent with the game’s mid-’90s chronology – Kaitlin must scour the abode in order to piece together the game’s narrative. As such, the house becomes as much an integral character to the game as the Greenbriars themselves.

“When the game came out we had a party in the backyard of the house we were staying in,” Fullbright co-founder Steve Gaynor tells us. “We had friends and people from Portland that we knew, and also family and friends that drove up from San Francisco.

“We projected the game from a laptop onto a sheet on the wall at the back of the house. People were playing it and the fact that [our] friends were there, liking it and excited that we’d finished the thing, was a great feeling.”

Although used as a recreational hub in this instance, the house Gaynor speaks of was more than just a party headquarters – it’d doubled as Fullbright’s home and office for the duration of Gone Home’s development. Whilst environmental artist Kate Craig worked remotely in her native Canada, the rest of the team – Johnnemann Nordhagen, Karla Zimonja, and Gaynor himself – shared rent expenses by setting up shop under the same roof.

Doing so led to many perks otherwise unattainable within the perceived orthodox studio setup. As a team, they could bounce ideas off one another face-to-face without the hassle of organising formal meetings; they could pick and choose working hours based on how much time and energy they had round the clock; they formed a sense of unity that wouldn’t necessarily have been forged whilst cooped up in an office. As such, the house became as much a part of Gone Home’s development as the direction from Fullbright themselves. 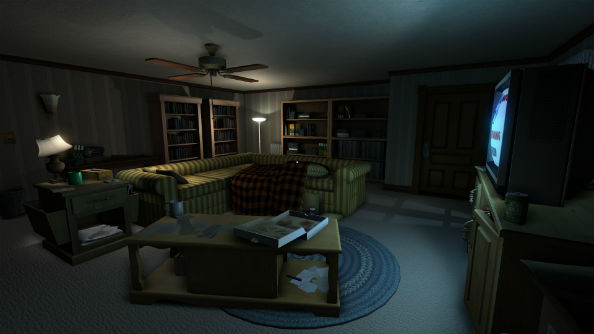 Fast forward just eight months and Gaynor et al were on stage at the British Academy Games Awards accepting the Best Debut Game BAFTA for Gone Home. Although most would class this as whirlwind success – from the game’s humble beginnings, to its multitude of glowing reviews post-release; from debut basement project, to prestigious award winner in less than a year – Steve Gaynor is used to working fast.

For as long as he can remember, Gaynor has played videogames. He doesn’t recall a time prior to owning a Commodore 64 upon which he enjoyed titles like Muppets On Stage and Godzilla, and remembers being influenced by an “archetypal 80s nerd” next door neighbour in his earliest years. He spent a lot of his youth reading Nintendo Power and playing games on the NES, however also made time for PC classics such as Where On Earth Is Carmen Sandiego, Space Quest For Glory, Monkey Island, Sam And Max, and Day Of The Tentacle, to name but a few.

His love affair with videogames carried on through the 80s, 90s, and into the 00s, and after graduating from college in 2005, Gaynor moved from his hometown of Portland to San Francisco, following his now wife who was set to start grad school. Here, he became a certification tester at Sony but quickly worked towards the field he was most passionate about: design.

“I was a tester for a year and a half and I was making my own levels for things in my spare time,” explains Gaynor. “I wanted to get into design and I knew someone online who worked at Timegate Studios – a small games studio in Texas. My contact knew that I made levels for F.E.A.R. and they were making an expansion pack for F.E.A.R. He recommended that I apply because they needed somebody, they needed more coverage to get the expansion pack done.

“Having someone say, ‘hey, you should apply for this job at this place that you never would’ve thought of applying to before’ – that was my first in, as far as getting my first design job was concerned.” 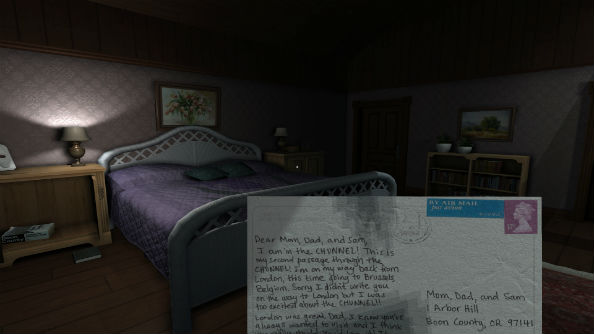 After spending six months working in Texas, Gaynor moved back to San Francisco, where he continued to work for Timegate remotely. In 2008, he went to GDC and met up with friends Chris Remo and Greg Kasavin.

Remo, a games journalist at the time, had an appointment with Irrational as they geared up for BioShock 2 and suggested Gaynor tag along. Kasavin, who hadn’t long made the jump from games writing to development, knew 2K Marin were in the market for designers. He also knew Gaynor loved BioShock, thus thought he’d be a perfect fit for Marin.

Gaynor visited the Irrational booth, struck up a conversation with developer Jordan Thomas, and was shortly after offered a job. He accepted, naturally, and joined 2K Marin. By 2010, Gaynor was a senior level designer at Irrational working on BioShock 2, before assuming the role of writer/lead level designer on the Minerva’s Den DLC, during which time he met Nordhagen and Zimonja.

The trio worked on BioShock Infinite, before leaving the Bay Area in 2012 to form Fullbright in Portland and work on their first independently developed game, Gone Home, free of the constraints levied by AAA companies.

Phew. Let’s take a breath. I told you Gaynor worked fast, didn’t I?

For those of you who’ve played Gone Home, it may come as a surprise to hear that it was originally supposed to include robots. In its first guise, gone was the wonderful 90s nostalgia and in its place a sterile, automated house with patroller bots and a sentient AI CPU. 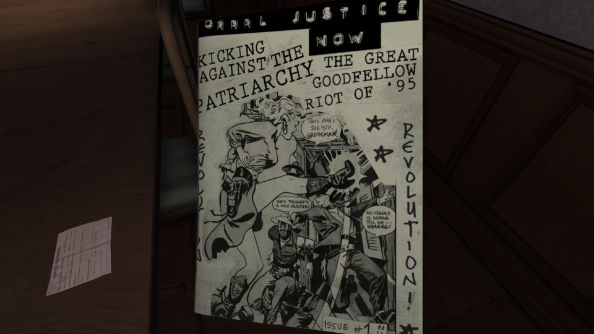 “The first idea that I had still took place in a house, but it was a house of the future, basically, a computer-controlled house,” says Gaynor. “It was dealing with the systems that ran the house and the player would be able to change the state of it. It was closer to a non-combat System Shock game.

On the face of things, Gone Home had evolved into a much simpler, relatable and streamlined exploration game, but behind the scenes it very much portrayed the mechanical, robotic nature resonant of its original iterative guise.

Pragmatism became a key theme within Fullbright’s development process. The 90s motif that heralded such critical praise was in fact born out of technical necessity and practical considerations. Digital communications – computers, cell phones, emails, text messaging – tend to be more centralised, thus Fullbright wanted to avoid a present tense scenario, where the majesty of note collecting and puzzle solving would be lost. Going back to a time period they’d experienced themselves, then, just made sense. 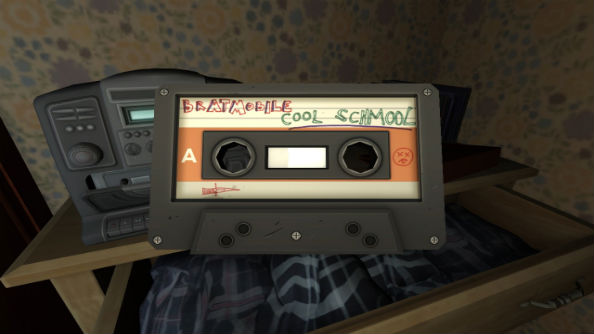 “Aesthetically, we wanted to set it in as recent a time period as possible, just for the familiarity of having been a time that we lived through and remembered clearly,” says Gaynor. “You know, we were all 90s teens, so it was stuff we could reach back to from our own memory, which I think is really valuable.

“We could’ve set it in the 60s or something, but that’s all research and doing your best to make it seem like how the era’s depicted on TV shows to make it accurate to those times. If you can say, I remember what it was like in 1995, there would be X, Y, and Z – there would be VHS tapes with movies that Dad had recorded off of cable, etc. then you can put that in and you’d know if it feels right.”

This struck a chord with many players, so much so that hundreds of fans reached out to share their stories with Fullbright. Gaynor speaks of his surprise at just how polarised some of this feedback was – ranging from heartfelt, touching testimonials, to the largely over zealous ‘this isn’t a real game’ detractors.

If you haven’t played Gone Home, now’s the time to go give it a try. The following enters spoiler territory by discussing players’ responses to the game’s story arc.

Needless to say, spoilers below. 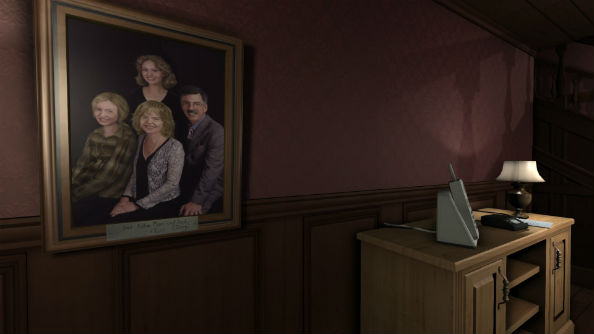 Since its release, how Gone Home broaches the subject of sexual orientation has become a major talking point. As noted above, Fullbright were inundated with personal tales from players relating their own experiences, their own lives, with Samantha and Lonnie’s relationship and how playing Gone Home helped them, evoked nostalgia, or made them appreciate their own situation on a new level.

Perhaps the most interesting responses, though, were the ones which suggested Gone Home had challenged what some players would otherwise have thought were staunch, steadfast beliefs.

“We had at least a couple of people write in to us and say explicitly: I’m a dude from, wherever, Wisconsin, and I opposed gay marriage and have always felt that that was wrong,” says Gaynor. “I played Gone Home and I got to know these characters and see what their experience is from their perspective and now I really feel differently about those views that I held because it gave me insight into the other side of what I thought I’d made up my mind about. Thank you for making this game because it changed how I think about this stuff.

“Who knows if that sticks, who knows what the effect is in the long run, but the at very least someone believes that something we did gave them a new way to look at this part of their experience and the world.”

This in itself is a fascinating insight into the persuasive power of videogames. Recreating a relatable and realistic scenario and using it to deliver a relatable and realistic message had a profound effect on certain players, it seems, and whilst Gaynor admits not everyone can know a homosexual person in their real lives through circumstance, being part of the conversation, creating something which has the potential to expand the horizons of players, is a brilliant thing. 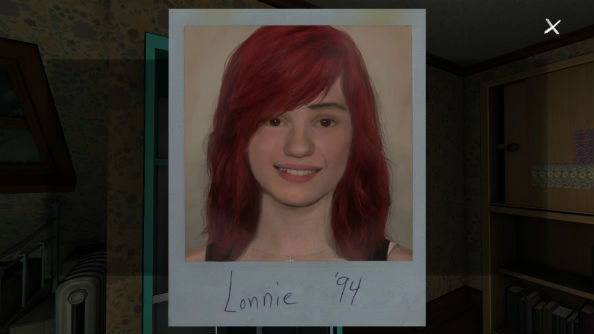 Nowadays, Fullbright are bigger. They’ve moved out of the share-house and into a ‘real’ studio, where they continue to work on their next release, a sci-fi non-combat exploration game called Tacoma. Unlike Gone Home, Gaynor’s not the only writer and level designer and has had to adapt to a much bigger, thriving Fullbright team.

Things have changed, but what made Gone Home quite so special for Gaynor has not. It’s not the reviews, the money, or the awards, says Gaynor, it’s the personal replies from fans that made it all worth it. Fullbright are naturally hoping to match Gone Home’s success, but, whatever happens, the personal response Gone Home received after release will forever be Gaynor’s standout moment as an independent developer.

“The most valuable stuff has been the very personal emails that people wrote us just after the game had come out,” he says. “Just saying, ‘I saw myself in this game, I saw my sister in this game and remembered what she was going through, I was feeling really depressed about where I was at in my life and playing Gone Home pulled me out of that’ – those kinds of things just mean that we made something that meant something to people. It changed their lives in some very small way for the better.

“When you make something and people take the time and effort and reach out and open up about what the thing you made meant to them, you can’t ask for a lot more! We feel eternally grateful that we’ve had the opportunity to connect with people.”