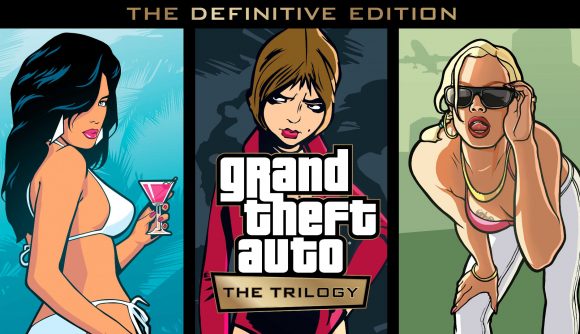 The classic, PlayStation 2-era Grand Theft Auto trilogy is officially getting remastered, confirming a long series of leaks and rumours. Contrary to initial reports, the PC version of Grand Theft Auto: The Trilogy – The Definitive Edition will launch this year, but there’s a catch – it’s going to be exclusive to the Rockstar Games Launcher, and the original games will be removed from Steam prior to launch.

Grand Theft Auto: The Trilogy – The Definitive Edition hits PC via the Rockstar Launcher, Switch, PlayStation 4, PlayStation 5, Xbox One, and Xbox Series S and X this year. Existing versions of the games will be removed from all console and PC digital storefronts, including Steam, starting the week of October 11. If you already own the games, you’ll still be able to install and play them. So get them while you can.

As the name suggests, The Trilogy will feature GTA 3, Vice City, and San Andreas. Rockstar says in a press release that the collection will “feature across-the-board upgrades including graphical improvements and modern gameplay enhancements for all three titles, while still maintaining the classic look and feel of the originals”.

Rockstar has not provided any screenshots or gameplay footage yet, but more details will be revealed “in the coming weeks”.