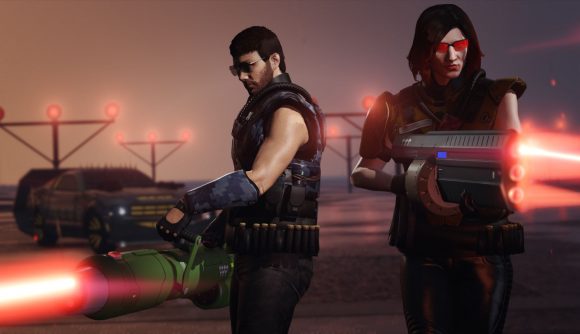 I wish I could say that with its latest update, GTA Online has jumped the shark, but it already has guns like the Up-n-Atomizer. Perhaps it's jumping another shark of at least equal size. Anyway look, you can now buy your very own portable laser cannons, as seen in the in-game cartoon show Republican Space Rangers.

Yesterday's update adds the Unholy Hellbringer and Widowmaker to the inventory at your local Ammu-Nation. The former has a rifle-like frame with a drum mag and costs $449,000, while the latter is carried underarm like a minigun, has a maxed-out fire rate, and costs $499,000. A variety of garish skins are available for both, with prices starting at $5,250.

These prices put them among the most expensive personal weapons in the game. One big advantage they have – as you can see in the gameplay video below courtesy of GTA Series – is that they each have a magazine size of 9,999, so you don't need to worry about reloading them until all your rounds are spent.

The guns are based on those carried by the all-American protagonists of Republican Space Rangers, a cartoon show that runs on GTA’s in-game TV channel Weazel. The Rangers patrol the universe eliminating perceived threats to America, guided by their motto: “shoot first; ask questions never!”

Here’s the announcement on developer Rockstar’s website. Double GTA$ and RP on the Arena War Series, along with three vehicle-based competitive modes, is still running until January 14. All biker business sales are paying double cash for the same period.

Read more: GTA V is one of the best sandbox games on PC

If you’d like to take advantage of that, there’s no better time to add a new business to your criminal empire, with 35% off biker businesses this week. That’s along with the following discounts: