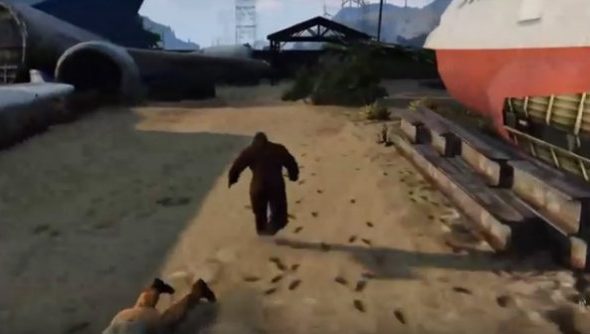 After months of digging through GTA 5’s code and following the breadcrumb trail laid out by Rockstar, a bunch of hunters have worked together to finally uncover the Bigfoot mystery.

Since you’re here, why not check out our list of the best sandbox games.

It all started last year when players uncovered a golden peyote plant. It was found by digging through the game’s code which gave the exact coordinates of each of the seven plants. The problem was, some of the plants just weren’t where they were supposed to be.

There was a little hint hidden in the code from Rockstar though, with a line of text saying “he was wrong to start his hunt on Tuesday”.

Similarly to the Mount Chiliad UFO mystery, the peyote plant only appeared when going to it on the right day and during the correct weather conditions.

“Each and every patch, a dedicated team of code readers called The Codewalkers constantly check if something new was added into the [GTA 5] code,” Louis C LeBlond, one of the key players involved in solving the mystery, told Kotaku in an interview. “They compare [databases] and [from there we got] clues about what was added or not. This is all very difficult because Rockstar are masters [at] hiding their code.”

Soon after, players realised they needed to assign each peyote to a day of the week, tampering with the game to spawn the right weather for the seven consecutive days as they tracked each one down. They finally did it and… nothing happened.

However, a later GTA 5 update changed the Tuesday hint hidden in the code so it said “His quarry seemed familiar”.

“The consensus so far has been that Rockstar only added the rest of the secret into the code when they knew that we had completed the seven golden peyote spawning mystery,” LeBlond said. “For everyone, this was a 100% confirmation that Rockstar was communicating something with us.

“We only understood [it recently],” LeBlond said. “We realised that all along…we were basically chasing a beast…quarry in this sentence means an ‘object of pursuit.’”

Now when the peyotes were eaten in order, GTA 5 spawned a minigame where players had to track down a new hunting target.

It’s a difficult hunt, with some players reporting it lasting over an hour. LeBlond was the first person to manage to fell the beast before it got away and you can see the chase in the video below:

Successfully hunting down the beast awarded LeBlond with a Teen Wolf skin for use in Director Mode.

“It was really a complete group effort between more than 30 persons,” LeBlond said. “We were all live chatting on our dedicated Discord server [to solve it], with the codewalkers streaming live while they were deciphering the code.”

Other than the skin, LeBlond’s prize was getting to feel “like a proud hunter finding a legendary beast.”