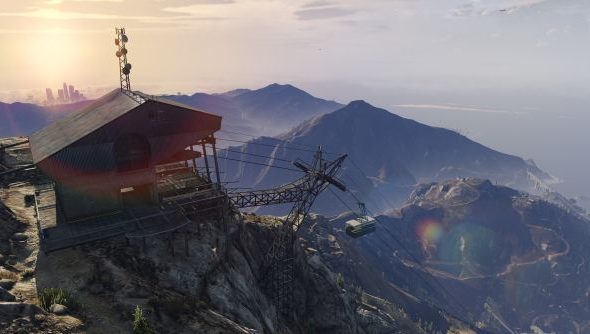 GTA V has jacked Half-Life 2’s status as the best-rated game on PC – presumably by pressing ‘enter’ somewhere in its vicinity and waiting for the protagonist to jog around to the driver’s door of Valve’s vehicle. Yup: if you were still thinking that Alyx and Ravenholm were the most wonderful things on the platform, you’re officially an old man or woman of videogames. Enjoy Wii Bowling in your dotage.

Visit the GTA V Metacritic page and you’ll see that it has a 97% rating, based on 47 reviews of its new PC version. And it looks like our Matt was one of the people responsible for putting it there, so blame him (we’re too young to have reviewed Half-Life 2, but rest assured it would’ve been a 10).

That’s 1% more than Half-Life 2 has to its name, making GTA V objectively the best PC game of all time.

I’ve scanned Matt’s GTA V review over and over for mention of a gravity gun, and I can’t find it. Something must be up. He did say this, though:

“A GTA world has never been as populated with things to do, be that hurling yourself out of helicopters whilst riding an ATV, or seeking out bounty hunt targets for big cash rewards. Los Santos is a world full of amusement and excitement, although these days Rockstar’s satire is starting to wear a little thin and the jokes don’t always hit the right mark.

“Online, it’s the same experience, but all the other gangsters are real people. And you can engage in a car chase with a rival player whilst Kenny Loggins’ Danger Zone plays on the radio. If that doesn’t convince you, I don’t know what will.”

Don’t feel too bad for Half-Life 2: it’s in the Metacritic top 10 twice thanks to the Orange Box, and has its predecessor for company.

On second thought, look at what’s at number three. Maybe better not to read too much into all this, eh?