Update June 24, 2017: It looks like a win for OpenIV, as the mod has just received an update following Take-Two and Rockstar’s change of heart on single-player mods.

After Take-Two released its official statement yesterday that said it will not challenge those who create single-player mods that respect the company’s IP, OpenIV has returned from the dead with a small update. According to PC Gamer, Take-Two and OpenIV were in talks to rectify the situation, and it seems to have come up trumps for the modders.

Need more multiplayer games? We’ve got the best ones, all ready and listed for you.

This update is only minor, mind you, simply containing “bug fixes and small improvements,” but the fact it’s being updated must mean that Take-Two and Rockstar have dropped their legal challenge against Open IV.

Update June 23, 2017:GTA V developers Rockstar have come to an agreement with their parent company, Take-Two, about dealing with mods.

In an official update, Rockstar say Take-Two will no longer take action against single-player mods, so long as they don’t violate a couple other caveats.

“After discussions with Take-Two, Take-Two has agreed that it generally will not take legal action against third-party projects involving Rockstar’s PC games that are single-player, non-commercial, and respect the intellectual property (IP) rights of third parties,” the update explains.

Rockstar go on to say that this is not a license and it does not mean third-party creations have their blessing or endorsement. Saying that, they want players to display their passion and creativity with their games. This stance could change at any time, however.

Check out Rockstar’s site for the full update. The community has responded positively to the change.

Massive respect to @RockstarGames for setting things right today. OpenIV is not in the clear yet, but SP modding is! https://t.co/Nhh0YgeOcz pic.twitter.com/5pk72jx2cS

Update June 17, 2017: AChange.org petitionto save OpenIV has over 30k signatures.

“The closing of OpenIV leaves 10,000s of people without access to be able to mod their games, and leaves 10,000s of people without the ability to continue their hobbies,” the petition reads. “All modding used by OpenIV is for singleplayer use only to make the game more enjoyable, the software OpenIV was never used to mod multiplayer or Grand Theft Auto Online so it does not harm anyone.”

The petition demands Rockstar allow the team to continue distributing OpenIV, and that modding “be deemed legal again” across the entire series.

Update: PC Gamer received a statement from Rockstar regarding OpenIV, explaining why the modding tool was targetted with a cease and desist.

The company also explains what they plan to do next.

“Take-Two’s actions were not specifically targeting single-player mods. Unfortunately, OpenIV enables recent malicious mods that allow harassment of players and interfere with the GTA Online experience for everybody.”

Presumably, it was once the code hacks were making it into the online experience – where Rockstar make a significant amount of money from microtransactions – that they had to shut it down. There is some good news, however:

“We are working to figure out how we can continue to support the creative community without negatively impacting our players.”

This could take the form of an official modding tool, or at the very least some support. Exactly why they had to go to the extreme of a full cease-and-desist rather than fighting specifically the hackers themselves, or any one of a number of other solutions, isn’t clear.

PC Gamersay they’ve fired back a few more questions, so we might hear more soon. Hopefully this doesn’t have a knock-on effect to any possible PC version of Red Dead Redemption 2.

Update June 15, 2017:The team behind OpenIV have given a more complete timeline of events for the cease and desist they received from Take-Two, over on GTAForums and Twitter.

This all started almost a month ago, when the lead developer on OpenIV received a letter requesting the team stop working on and distributing the mod, and any “Liberty City in GTAV” projects.

To make it all clear, here is what happened:pic.twitter.com/BFqMCEKkM9

Following this, the lead developer sought some extra details, but was simply met with a cease and desist from Take-Two’s Russian legal representatives, accusing them of breaking Russian law. This is all coming from GooD-NTS, and we don’t have any timeline from Take-Two right now.

PC Gamer have been in contactwith both GooD-NTS and Rockstar – they believe the cease and desist to be legitimate. Rockstar have also confirmed to PC Gamer that they’ll be issuing a statement on the matter “shortly”, with their article being posted four hours ago at time of writing. When “shortly” is, we don’t know. We’ll update if we have any new information.

Update:The community has made its opinion clear via Steam user reviews. Status: not happy.

GTA V, the second-best reviewed PC game of all time behind Half-Life 2, currently has a‘Mixed’ rating on Steam. The cause, as recent reviews posted on the game’s page make abundantly clear, is the closure of OpenIV. As yet, neither Take-Two nor Rockstar have commented on the backlash. 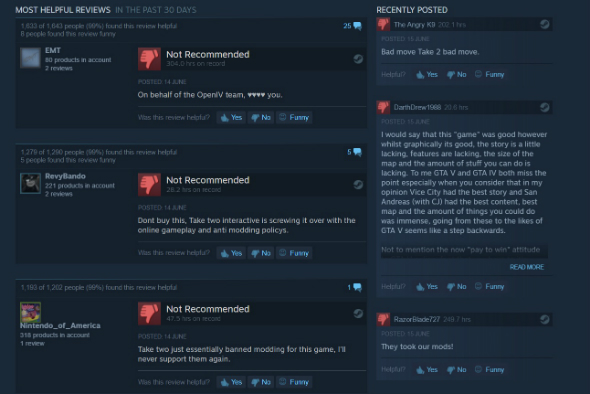 Original story:Take-Two have decided to swing the mighty hammer of lawyers again – this time, they’re targeting OpenIV, a mod that describes itself as “the ultimate modding tool for GTA V, GTA IV, and Max Payne 3.”

This news comes from all of OpenIV’s channels, with the lead developer GooD-NTS posting on GTAForums about the issue.

On June 5, 2017, the team received an official cease and desist, with the post quoting one line from the letter. Take-Two claim that OpenIV is made to “allow third parties to defeat security features of [Take-Two’s] software and modify that software in violation Take-Two’s rights.”

The mod allowed you to edit just about anything in GTA V, and while it’s not clear what part of the mod Take-Two took offense to, OpenIV allowed you to do a lot of things GTA V wasn’t meant to do.

Good-NTS describes the full letter as “illiterate,” and defends his mod and team by saying that they would never mess with GTA Online, and stuck to the Civil Code of Russia (his home). The team have decided that continuing development and distribution of the mod wouldn’t be worth the legal risks, and so are ceasing all development and taking the mod down.

We’ve contacted both GooD-NTS and Rockstar for further comment, and we’ll update if we hear anything back.