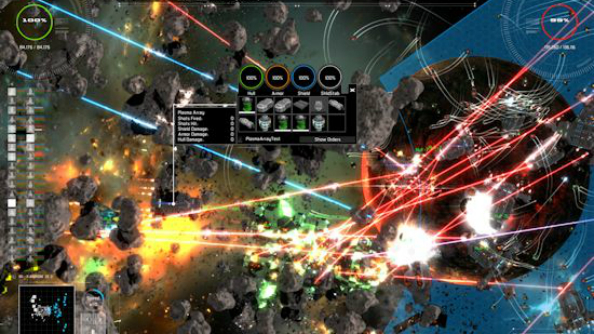 Here’s an interesting bit of indie development economics: your game sells 10,876 copies at an average of $10 per copy. How many Bugatti Veyrons can you afford to buy from the profits? As Gratuitous Space Battles creator Cliff Harris explains in a blog post, once Valve take their cut via Steam and your development and marketing costs are factored in, those profits equate to a wage of under $13 per hour.

Got stars in your eyes? Check out our best Matthew Kelly simulat- er, space sims on PC.

Harris discloses the sales data of his brainchild, Gratuitous Space Battles, as a response to the oft-fielded question regarding a possible sequel.

“And I am not,” writes Harris. “I’ve been accused of all sorts of stuff as a result. I wont repeat that here. What I want to talk about is the economics of this question, why people get angry, and why it makes sense that I am not working on Gratuitous Space Battles 2 right now.”

“However steam take their cut so thats really only about $120,000. Actually thats a bit shy of the real figure, which is just over $150,000. So I guess some people (mostly kids) are screaming at me at this point for being a greedy scumbag and so on, because I am implying the game failed or I can’t afford to keep working on it.

“The development & marketing cost for that game was $115,000. The *profit* so far is about $40,000. If I look at the hours I spent working on it, I earned about $12.74 per hour. That is assuming I stopped work on it when it shipped, even though I did not, and continued to add patches, fix bugs, add new features and polish existing ones for months after release. Something that made zero economic sense.”

Zero Bugatti Veyrons, then. It’s sobering to see the numbers broken down so starkly, and to be given an insight into the struggles of indie development. It also goes a long way to explaining the widespread shift towards crowdfunded development – it at least offers a baseline sales figure before you commit to a development budget.

While we might be waiting quite some time for Gratuitous Space Battles 2, Harris’s Positech studio is “doing fine” and working on a new project.