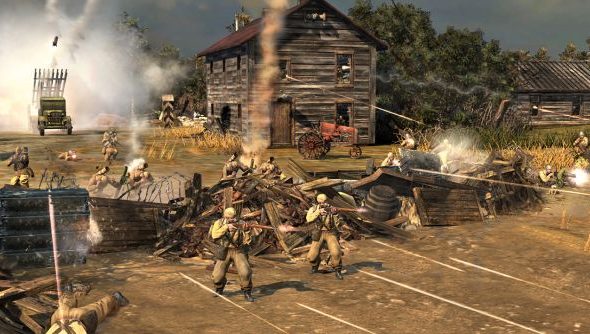 Green Man Gaming are doing a sale. Of PC games! PC games in bundles and in multi-packs. PC games by corps and by indies. PC games up the wazoo.

There’ll be deals every day from 10am across the next week, and today’s are headlined by the very best stuff Sega does – new Football Manager and Company of Heroes.

And thanks to Playfire and, umm, us, there’s a chance to make a little money playing them.

GMG social networking arm Playfire are running a Rewards beta at the moment, and it’s a fascinating thing. Their achievement system acknowledges your in-game progress, and drip feeds you GMG store credit as it does so.

In total, the Playfire and PCGamesN rewards for today’s sale represent a potential £7.95. Given that Aliens: Colonial Marines is currently 95p cheaper than that and plenty more games will follow, you could make some very canny purchases over the next seven days.

And here’s what’s good about Playfire: it knows better than to ask you to leave Steam behind. Just log into the site using your Green Man Gaming email address and password, sign in with Steam, and away you go.

These are all for the Rewards-compatible PC games going cheap for the next 20-odd hours.

And our personal favourite elsewhere on the site? £2.49 for Double Fine’s inexcusably underrated pre-DFA adventure game, The Cave. Glorious.