It’s a frustrating mistake: taking one corner just a little too quickly in my Audi RS5 sees my wheels spinning uselessly, and me sliding away from the turn’s apex. Just as I think I’ve dodged serious damage from the passing AI, a BMW I’d nudged into a smash earlier in the lap takes revenge. He shunts me, sending me spinning.

Grid Autosport has its foot down. Codemasters have turned around the current version in 12 months: straight after the release of Grid 2. But the two games feel completely different. “We make no secret that Grid 2 was targeting a broader audience,” producer Clive Moody tells me. “The downside was we definitely upset our core gamers.” With Autosport they “wanted to go back to a more authentic racing experience.”

Touring cars are all about the pack, you’ll spend the early race trying to break through by barging other cars out from the racing line and trying not to get spun yourself, then the rest of the race trying to hold your lead. Endurance races are a challenge of consistency, maintaining a good lap time time after time, knowing when to take a risk and when to play it safe. Tuner events are the specialist races – drifting and time attacks. Open wheel racing centres around the kind of single seaters you see competing in Formula One. The cars are fast and delicate, with the slightest mistake sending you spinning out into the back of the pack. Finally, street racing challenges you with heavy cars, tight roads, and aggressive drivers.

Each discipline offers a new challenge and Codemasters want each to teach you a different way of racing. They enforce this in every aspect of the game.

They begin with how each car handles, programming in all the raw data on offer from the manufacturers – top speed, acceleration, braking speed, weight, etc. All the numbers their physics engine needs to begin simulating the car’s presence in Autosport. Then, on top of that, Codemasters’ car handling team “read interviews, watch videos, do as much research as they can about the character of that car,” chief game designer James Nicholls explains. “They start to craft into it nuances. We’re not just taking those real values and simulating it, we’re providing the experience of what it’s like to drive that car.

“Obviously, there’s a lot of things you can’t feel, it’s a flat screen. For instance, you’ve got no g-forces acting on your body, even with the best racing seat you can’t get that. We need to find different ways to feed that back to the player so we have to change things in the game. To reflect the g-force acting on you we move the camera around, make it pivot and shake.”

Their work shows. The Audi felt heavy in the street race. It wouldn’t take the corners well, needing a wider turning circle. At the end of the straights I’d have to slam on the brakes to get it to slow down enough for the corner. When it collided with another car I felt the impact: the camera would slam forwards, for a moment covered in pixelated visual artifacts. If you’re in the in-cockpit view (yes, it’s back) your viewpoints shakes as if you’re suffering from whiplash.

That’s not the only visual trickery.

Codemasters use depth of field around the periphery of your vision to draw attention to the road ahead, giving you that sense of speed. On tracks outside of the city leaves rush past your windshield, while in the city the noise of the crowds is augmented by the doppler effect. It’s a very sensual game. 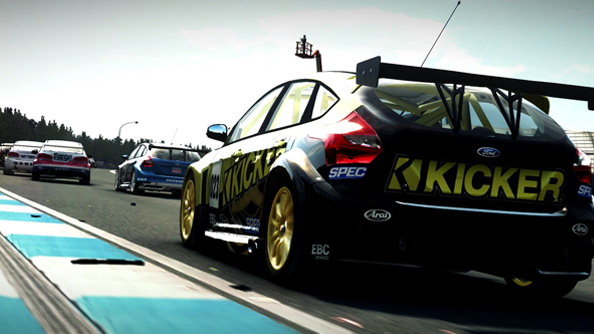 “We do loads of work in that regard,” James explains. “Every bit as important as getting the car set up right is the work the car handling guys do with damage models, setting the cameras up and the way they move – all the springs can be set up on a per car basis. It’s a real craft”

A big part of that feel for the road also comes from the complexity of the physics engine running under the hood. Take that street race, for example. It was set in San Francisco, going up and down the hill roads that are shared with trams and their tracks. Hitting tracks mid-slide, even just tapping them with my lead wheel, leaves my car struggling for grip. In a touring car race, clipping a rise at the edge of the road sees me fighting the wheel to say on the racing line. You can feel the change in grip, sense the different road surfaces.

“Even though we chose not to go for full simulation, [our engine] is capable of driving all those wheels and force feedback peripherals,” James said. To prove his point he sat me down in the office D-BOX. A D-BOX is a chair that’s hooked up to a set of pneumatic pistons. It’s incredible. When one wheel hit the curb then the chair would lurch me back from that one point. The game is tracking each wheel and each suspension spring separately. The juddering leaves me a little bit shaken. The D-BOX isn’t even of its top setting. For that, Clive laughs, “we’d need to screw it into the floor.”

But it’s GRID’s damage model that the team are most proud of. “We’ve had damage systems in the games before,” says James, “but this is much more subtle than previously. The fact that your gearbox wears out in races and it starts skipping gears.” On long races if you’re making bad gear shifts you’ll wear through your clutch. You’ll hear the problem, before you can feel it.

First you’ll hear a whining noise as the cogs start to weaken and then you’ll hear a bang. Smoke and bits of car will drop out the back.

AI drivers have seen an upgrade, too. “In our open wheelers it is about non-contact and, obviously, the AI are going to avoid contact, but they also have one blocking move if somebody’s trying to overtake,” explains Clive. “Touring cars are a little more aggressive, a little more argy bargey. They’re always authentic, they’re always believable.” 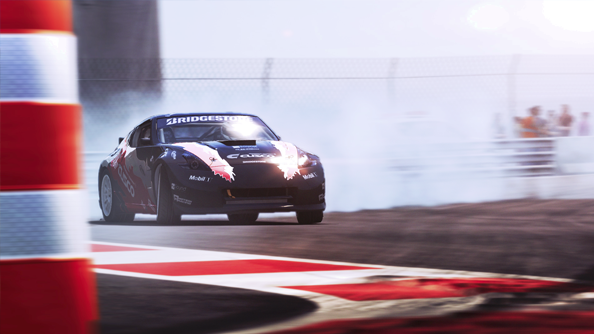 “It’s little details, too,” continues James. “Your teammate will yield to you if you catch up, he’ll just move off the line so you can come through. If you’re racing in Time Attack the rules aren’t to barge each other out of the way and compete on the track, you’re all spaced around evenly trying to get the best time you can. So, if you catch up to the AI, they let you pass. Each mode feels different.

With all these systems in place Clive and James next turn to the career mode. “Just like a real driver would you’re offered contracts to race for a team and they make you offers based on how you’ve performed for teams in the past,” says James. “You’re basically set objectives that last for a season, you’ll need to do something like finish fourth in the drivers’ standings. It’s not about one race, it’s not about finishing on the podium every race. You could scrape in in fifth in a battered car and being happy, that’s absolutely part of what racing’s about.”

“Often you’ll be set objectives that are team-based,” Says Clive. “You can ask your teammate to help you out via the engineers – to push and take some risks, and try and gain a track position, or you can tell him to back off and hold what he’s got. If he’s further up the pack you can tell him to slow the pack down so you can weave through and catch up with him.” 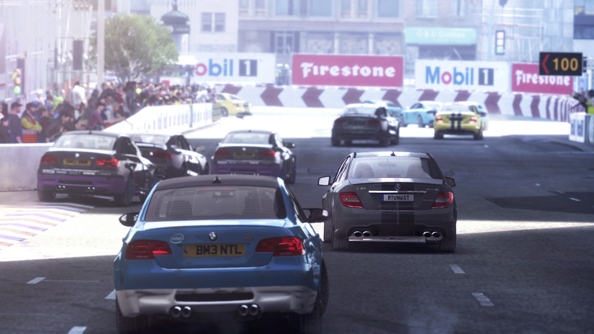 And all of this carries over to the multiplayer, too. “In Grid 2 we treated cars more as unlocks,” explains James. “We want people to build up an affinity with these cars – there’s little seeds of World of Tanks in there. The idea is that a car has XP, so there’s persistent mileage, where if you buy it factory fresh it has zero miles on the metre and it ticks up as you race with it.

“The older it gets the more it will cost to repair and maintain it over time but you’re also gaining vehicle XP with that car. You open up more options of how to tune or upgrade it. You’ll be able to push that little bit harder than everyone else, to squeak out that extra bit of performance other people don’t get, but conversely it’s also ageing, costing you that little bit more each time to look after it.”

“You will get to that point when you’ve got that faithful old companion in the garage and you only get it out for special weekends because it’s getting quite costly to run but you want to keep hold of it.”

Also, finally, Codemasters are adding teams to RaceNet, and with it revealing a sign of the studio’s plans for the future. “RaceNet Clubs [let you] team up with 100 people online and form a club,” says James. “From the game you can upload a team livery and everyone races in that livery. Because RaceNet exists alongside the game we can keep working into that. That tech can span multiple Codemasters games and we can keep working into those clubs and improving the play and competition between those teams.” As Codemasters continue releasing new games and updates for old ones these teams are going to tie these games very tightly together. It makes Autosport begin to resemble a game as a service, not as a single release.

That’s exactly how Clive sees what Codemasters are attempting: “Autosport isn’t a fire and forget game. It’s something we intend to support for the long haul.” 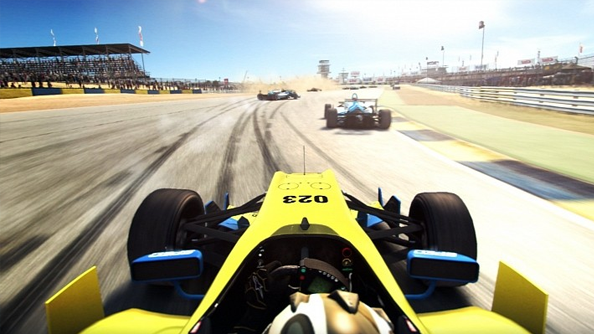 As I limped by Dallara F312 over the finish line in last place I was, again, frustrated. I’m rubbish at open wheel. With the assists turned off I couldn’t keep the car from spinning out, every corner saw my screaming off the road, and I was being lapped before I’d completed my first loop of the track. But this wasn’t the frustration that would see me putting the controller down, I restarted the race and went again. Willing myself to get better.

Prepare to strap yourself in when Autosport releases because you’re going to be hooked.