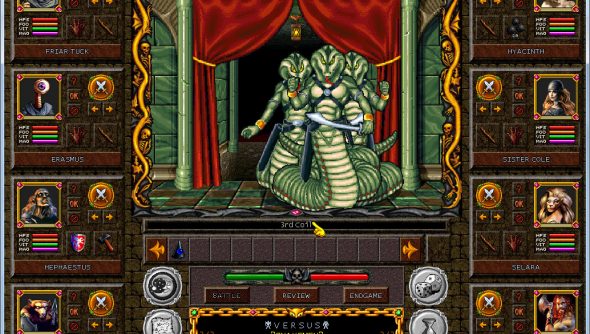 It’s taken 20 years to get Grimoire: Heralds of the Winged Exemplar ready for release on Steam. Yes, you read that right. I said 20 years. No, that isn’t a typo.

“After more than 20 years of development, the greatest roleplaying game of them all is finally ready for release!” writes developer Cleveland Mark Blakemore, on Grimoire’s Steam page (thanks, Kotaku).

Looking for more indie games? Check out our list of the PC’s best indies.

“Grimoire was quietly released in the morning in America without much fanfare and has sold well over a thousand copies before closing hours,” adds Blakemore in a subsequent update. “Not bad for an indie game written by one person with almost no advertising whatsoever of any kind. The sales seem to be increasing hourly.”

Although generating “mostly positive” reviews, it’s not launched without a hitch.

“For a game 20-years in development and delayed so many times, I’m kindda disapointed [sic] by the amount of bugs and technical issues,” says one reviewer. “Therefore I cannot recommend the game at the moment but once everything gets fixed/patched, it’d become a good niche game.”

“On the positive side, I’m having fun and I can see how a fan of this kind of game will enjoy it (expect your share of treasures, secrets, loot, random combat and even talkable NPCs via a keyword system). For others, be aware that this game is not for the weak and requires thinking.”

Blakemore says he’s already tackled the “initial reports of bugs” seemingly caused by resolutions and display modes “that did not exist only a few years ago.” Other problems with 64-bit machines were also squashed “less than 120 minutes after they were reported.”

“This did not stop a vocal, dedicated group of politically motivated activists from deliberately purchasing the game solely to give it a bad review and then get a refund,” adds Blakemore in a subsequent update. “They were trying to stop a tsunami by body surfing the edge of it. That attempt has already tanked. The incline is so suffused in Grimoire it is only a matter of time before their slander of the game is washed away by the sheer volume of people discovering how rich it is.”

Yikes. Salty much? Others seem to agree.

“The game may be good or bad, I don’t know, but coming on steam as the author and proclaiming your own game to be ‘one of the best computer roleplaying games ever written’ is just going to rub people up the wrong way,” says a commenter.

I’ll leave you with Blakemore’s latest comments on his own game:

“As the author, I know what people have not discovered yet. They are on the tip of an iceberg and Grimoire runs into deep, deep waters. The density they see now is only a fraction of what they are going to find as they push further into the game. A play of only a few hours will not even break the surface. The familiar area of the original demo, the Avian Mountains, is now only a single drop of rain in a cyclone compared to how much they will discover when they leave this area. Rather than tell people of the Dirge … or of Waterport … or of Bahomet Megalith … or of the Necropolix … or of Black Pierre … or of the Raven Wildes … or a hundred other areas … or of the vast story that awaits them … would only spoil the fun. I prefer to let word of mouth do that for me, the best kind of promotion of them all.”