It’s been three years since Ubisoft announced Child of Light, a JRPG and “interactive poem” built by a tiny team embedded in the ginormous city studio that is Ubisoft Montreal. It was notable not only for its small scale and quiet ambition but also for the fact that it was just a little bit pretentious.

Child of Light director Patrick Plourde, who had done time on Assassin’s Creed: Brotherhood and Far Cry 3, swiftly became an advocate for the pet projects that gestate deep inside every triple-A lead. And Ubisoft – perhaps recognising the creative itch that was seeing some of their best minds skidaddle to form indie outfits, and detecting an opportunity to earn some cred with critics – have since codified that role. They’ve made Plourde VP of Montreal division Fun House, and given him a mandate to incubate the personal games sprouting up across Ubi’s cross-continental gaggle of studios.

So how’s it going? Let’s take a look back at the indie-ish games to emerge from Ubi thus far, like babies born with hipster beards.

Little bit Limbo, a lot Final Fantasy – in that you’ll spend some of your time pushing boxes around in a painterly, sidelong perspective, and the rest battling sentient trees and jumped-up spiders in timer-based combat.

Well, there’s a flight of fancy setting that sees a 19th century Austrian princess wake up in Lemuria – a mythical continent first hypothesised 200 years ago and since proven, obviously, not to exist. It’s a very European mixture of windmills, will-o’-the-wisps and wheeler-dealing anthropomorphic mice, not quite like anything else.

You and your companion characters stand opposite a bunch of baddies as you would in a traditional JRPG battle – but the order of attacks is determined by a timeline running across the bottom of the screen. You can influence that and interrupt enemies with spells, potions and high-agility smackdowns. 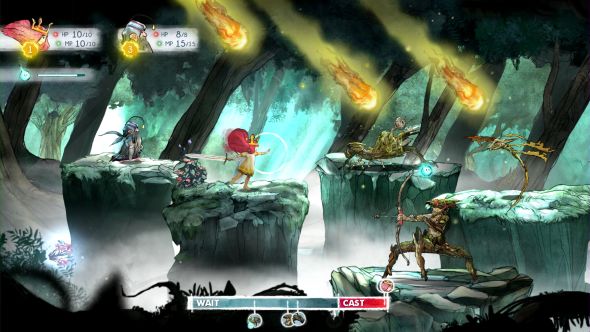 Did somebody mention poetry?

Er, yes. All of the dialogue is written in rhyming ballad form, and it’s the place where Child of Light starts to feel a bit overwrought.

Isn’t that the point with verse? That it’s not naturalistic?

I guess, but let me put it to you: how many times can you chuckle at a clown ending a line with a non-rhyming word? If that’s your idea of a big laugh, you’re probably Sam Coleridge – and he was from the 19th century.

Alright, time to tot up indie points. Child of Light is quite nice, if a little contrived. Any words in mitigation?

The most indie thing you can do is retire from development the moment your magnum opus hits digital download stores. And that’s kind of what Patrick Plourde has done – ascending to Fun House where he can guide others to enlightenment. 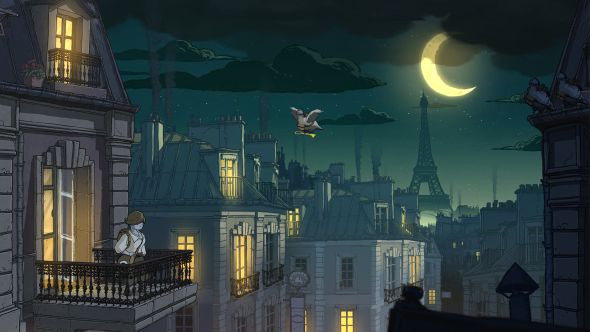 Who actually made this one? Ubisoft’s a big company.

This one was assembled by a crack team at Ubisoft Montpellier, who are as close to a boutique design studio as you get at a major publisher. Michel Ancel’s gang operate out of a picturesque townhouse in the sunny south of France, made Beyond Good and Evil, and patented all things silly and slapstick with Rayman.

Did Ancel make this one? I heard he’s not around so much anymore.

No, actually – this was an opportunity for an experienced team to get out from under the auteur and tell their own stories. Or rather, their grandparents’ stories.

So it’s about World War I?

Yeah. More specifically it’s about a set of fictional individuals in France, who we follow over the course of the conflict. One of them’s a dog.

Oho, start up the heartstring quartet.

It’s a piano soundtrack, actually. And the story succeeds because it concerns simple matters of the heart. All that motivates characters is their loved ones, and they’ll cross borders and battlelines to get back to them. The war is an unnatural disaster they’re just doing their best to weather. 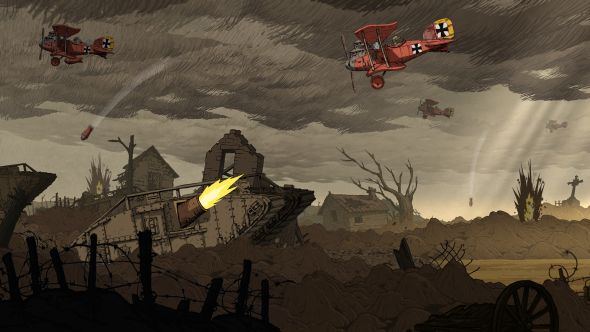 How does it play?

That’s pretty simple too. You jog left or right, solve some fairly easy and logical puzzles reminiscent of Double Fine’s The Cave, and occasionally engage in a spot of rhythm-action. The latter’s where you see elements of Rayman Legends popping in – the limbless wonder’s music levels are reimagined as cancan chase sequences.

Sounds a bit… I dunno. Disrespectful?

On the contrary. In fact Valiant Hearts avoids the hurdles Battlefield 1 will have to face by avoiding simulation completely and plumping for something so abstract it can’t be mistaken for documentary. It’s also filled with optional factual asides, and doesn’t pull punches when it comes to massacres and war crimes.

I don’t mind admitting this to you, disembodied Q&A voice, but I cried a little bit at the end.

Ugh. Let’s move on. Marks out of indie?

Put it this way – Valiant Hearts director Yoan Fanise is no longer in triple-A development, having started up a genuinely indie studio instead.

Why? As he put it to Gamasutra: “A successful chain of restaurants allows some of its cooks to install a food truck on the parking lot, then asks them to go back inside; what would you do?” 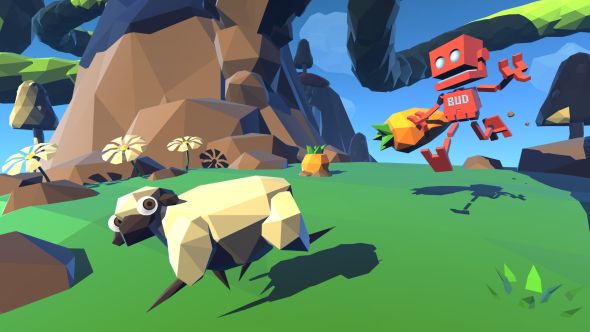 A bit. But where Child of Light maybe overloaded on whimsy, Grow Home is gently sweet. It’s from Reflections and shares an unfettered joy of movement with their most famous game, Driver.

You control a bumbling biped, BUD, who corners terribly and retains far too much momentum. However, you can grab onto absolutely anything by squeezing the left and right bumper pads – allowing you to anchor yourself and free-climb up any surface.

Why would I be climbing anywhere?

Because this is a Jack and the Beanstalk story about harnessing a ginormous starplant, steering its growth and riding its buds…

…all the way into space, where you can rejoin your mothership, named MOM. As you climb, you look down and see all these great protrusions you’ve created. It’s totally organic level design and incredibly phallic fun for all the family. 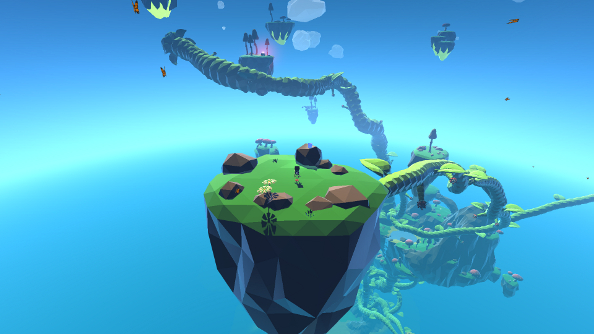 How on Earth did Ubi wind up making something like this?

That process seems to have been totally organic as well, after a few folks at Reflections built a procedural animation system, a platformer to test it in, and then chucked it between studios internally to see what people thought. It’s a far cry from the tightly regimented productions they normally work on. If you’ll excuse another pun.

Request denied. It says here to ask: is there a sequel?

If you could keep the prompt cards below the table, that would be appreciated. But yes: it’s cleverly called Grow Up and came out a couple of months ago. It feels identical at first, until you’re introduced to a device that lets you catalogue and reproduce the flora you come across. That means you can plant flowers – and they’ll grow to ping you high into the air, or fling you far across the map. Soon you’ve got a toolbelt full of nifty seeds. Botanists have all the fun. 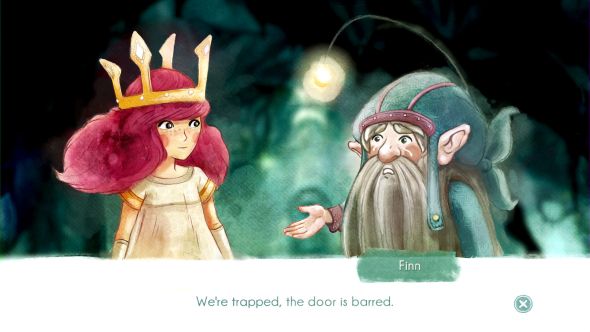 It seems Ubisoft’s indie effort was shakiest when it began, and has now wound up in a more comfortable, less stilted place. Its future is in multiplayer and VR – the Parisian dogfighter Eagle Flight, and the social deduction game Werewolf Within. And when EA announced Unravel, it felt as if they’d been looking over at Child of Light too.

Far Cry 4 lead Alex Hutchinson had his own little game greenlit a couple of years ago. As long as there are creative directors nursing little ideas, the indie-ish trend in triple-A is likely to continue. Keeping them indie-sized, however, is another matter.

“You want to do a small project, but then you’re like, ‘You know what? There’s some good stuff in here, we could grow this,’” Hutchinson told GamesIndustry on the escalating scale of triple-A games. “You see an opportunity there, or the company gets excited. It’s very hard to keep things small.”