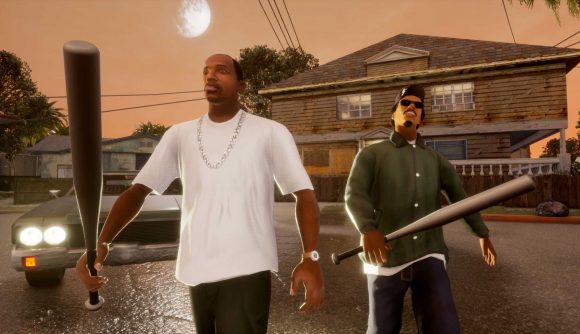 November 15, 2021 The GTA Trilogy is back on the Rockstar Launcher.

Rockstar has made Grand Theft Auto: The Trilogy – The Definitive Edition available for purchase on the Rockstar Launcher once again. The developer apologised for the inconvenience on its support page, and explained that performance fixes are on the way.

“Grand Theft Auto: The Trilogy – The Definitive Edition has been updated and is once again available through the Rockstar Games Launcher for play and purchase,” the statement reads. “We sincerely apologise for the inconvenience. We are also working to improve and update overall performance as we move forward. We would like to thank everyone for their patience as we resolve these issues.”

Not long after the game launched on November 11, Rockstar Games tweeted that services for the studio’s launcher and supported games were temporarily offline for maintenance. That followed reports from multiple players that the launcher was down – meaning the new Trilogy was unplayable through it on PC at the time. We also tried to launch both Red Dead Redemption 2 and GTA V on PC here at PCGamesN and weren’t able to hop in, with an ‘activation required’ error screen popping up on trying to boot them up.

A day later, Rockstar confirmed that the Rockstar Games Launcher was online, though the remastered trilogy wasn’t as the devs were removing “files unintentionally included in these versions”.

Grand Theft Auto: The Trilogy – The Definitive Edition is again available through the Rockstar Games Launcher for play and purchase. We sincerely apologize for the inconvenience, and are working to improve and update overall performance as we move forward: https://t.co/hAfEKqYS3o

The GTA Trilogy is now back, though we’ll need to wait and see what Rockstar has planned for fixes. One group of players have been cataloguing reported bugs and inconsistencies over on a fan forum, so it looks like there’s plenty to do.

If you’re looking for more open-world games  – you can find some of our favourites at that link.