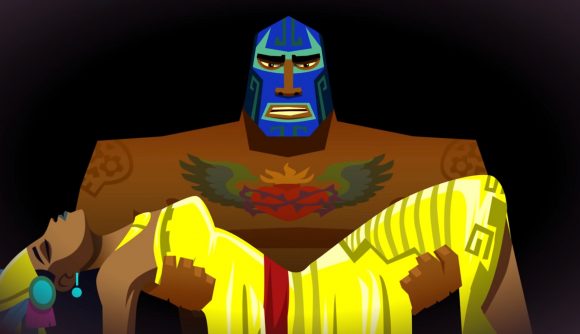 Don’t say anything about the Chicken Illuminati. That’s the golden rule here. It doesn’t exist so there’s no reason to bring it up. Got that? Ok, let’s crack on (is that an egg pun?) and talk about the brilliant Guacamelee! 2 as we’re giving away ten Steam keys for it – one of them could be yours!

This is the sequel to the cracking luchador action-platformer of the same name. If you played it you’ll know that main character and luchador Juan Aguacate retired at the end of it. But like the best videogame protagonists he’s come back out of retirement for this sequel as the very fabric of the Mexiverse could be torn apart.

That’s a good reason to start breaking the spines of the skeleton army once again. And this time there are more enemy types to kick in the face and plenty  more wrestling moves to do it with. Not to mention that Juan’s chicken form gets an expanded repertoire of furious pecks and aggressive wing flaps.

Also making a return in this sequel is the four-player drop-in/drop-out multiplayer. So if you have friends nearby get them over for a local co-op session – there’s a huge, colourful world to explore and tons of secrets to uncover, so the more eyes the better.

If you want to win one of the ten Steam keys we have for Guacamelee! 2 then all you need to do is enter the competitive via the widget below.

Every action you complete is worth one entry into the giveaway, with the more actions you complete increasing your chances of winning.