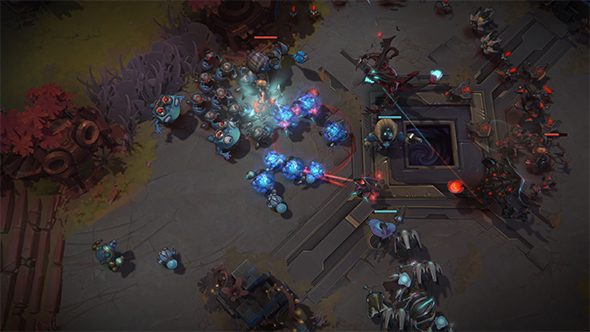 Kids these days. They get a laptop, they go on YouTube, they amass millions of followers, and then they think they can turn their hand to game development. Why don’t they leave it to indie developers who know their place? The unsuccessful ones living off toast, boxes of dry Corn Flakes and microwave noodles?

Have a scan through the best multiplayer games on PC here.

Probably because their notoriety ensures the game in question is almost guaranteed a certain level of success.

Confusingly, Plott actually left Artillery earlier this month. Nevertheless, Guardians of Atlas has successfully transitioned from private beta (which boasted 34,000 sign ups) to public alpha, which the world and his wife can now sign up for here.

“Guardians of Atlas is a unique MOBA-RTS hybrid for Windows and Mac which combines the action-packed, hero-centric gameplay of a multiplayer online battle arena game (MOBA) and the economy, territory control, and individual unit control of a real-time strategy (RTS),” offers the studio in its alpha launch blurb.

“In our first game mode, Skirmish, two teams of three players (3v3, PvP or bots) build and upgrade their armies, fight to destroy the enemy’s base, and summon titans – powerful units that help a team push forward.”

Big things are expected of Artillery. The company is already 17 people strong and raised $11 million in funding to date. If you want to check out how it’s doing so far, head on over to GuardiansofAtlas.com.