In the early ‘90s, a box started showing up in department stores and on kiddiwinks’ Christmas lists. It contained Advanced HeroQuest – an analogue dungeon crawler which, for its best trick, made the dungeons up as it went along. When the players’ party reached a doorway, they rolled to see what was on the other side – a gaggle of monsters; a puzzle room; a junction offering yet more doors. By the end they had a meandering tunnel network wholly different to the ones they’d plunged before.

That’s not nearly so impressive in the era of roguelikes, when computers can generate entire histories of fictional worlds. So Guild of Dungeoneering flips the formula, asking you to relinquish direct control of your adventurer and instead pick the tiles they’ll encounter – funnelling them through rooms you’ve populated with enemies and coin towards an objective.

It’s like the scene in The Wrong Trousers where Gromit lays the track before the toy train, but with barbarians and torture chambers. Guess what: it works.

Somewhere there’s a treasure room or grouchy demon, and your warrior is a solitary lemming. Every turn, your lemming will run headlong into whatever’s in the nearest available room, whether it’s loot, monster or stat-altering fountain.

You’ve got to lead them through this dungeon-in-construction by the nose. Faced with a choice between corridors, the warrior will take the path of most reward and least resistance. And you’ve occupied by just a few carrots and sticks to work with each turn – a hand of cards consisting of bags of gold, villains of varying levels, and new tiles which may or may not slot nicely into the network already laid out before you.

I didn’t realise quite how elegantly designed Dungeoneering was until I sat down to describe how all the parts fit together. You sometimes hear about developers blocking out their games on the tabletop first to make sure the systems are robust – the excellent Atom Zombie Smasher among them – and Dungeoneering feels like one of those.

Once your intrepid ward does bump into a baddy, combat initiates: a separate turn-based system in which your opponent draws a card, and you find a way to counter it using a move in your hand – blocking, healing, or dealing damage of your own. Hearthstone players will recognise the constant toss-up between pain mitigation and sticking the blade in; a handful of hearts is the only thing saving you from beginning the dungeon anew. 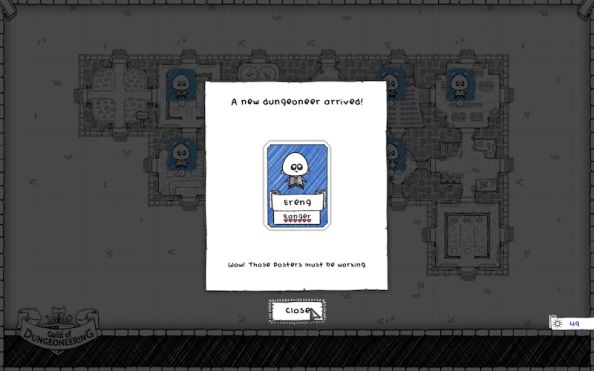 Combat cards are drawn from a deck representing your character’s abilities, and your starting deck is determined by the class you pick – one of several non-archetypal specialists like the Chump, Mime and Shapeshifter, who all strike their own balance between parrying and restoration, flinging spells and throwing punches.

You can bolster or fine-tune their movesets by picking up randomised items from chests and corpses during the course of a dungeon. As in Blue Manchu’s Card Hunter, a clear inspiration, a chest-fresh axe or helmet brings a new card or three to shuffle into your deck. Some offer powerful potential match-winners, but balance them with Stupidity – a do-nothing card that can stare dumbly up at you in a battle, taking the space of a useful option in your hand. Pick an item like that, and you’re making a deal with the dice.

The lot of your adventurer tends to improve with every fight – not least because they level up after scrapping with equally-matched foes, gaining extra hearts in the process. But it’s never easy, and an unnecessary encounter is also a risk that could see you booted back to the Guild. Somehow, you never seem to come out of a slugging match without glimpsing death.

That’s why, to return to the lemmings-level game, tempting your warrior down the right path can be terribly important. What you’re doing is managing your own difficulty curve – ensuring that your character meets appropriately-levelled enemies where possible; allowing them enough time to level up and loot better gear before facing bosses. 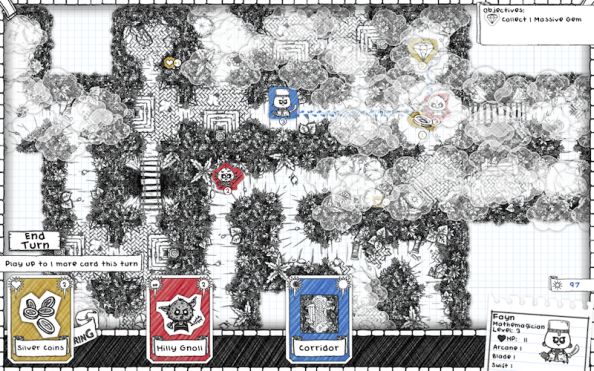 You can argue it’s a metagame RPG players are used to playing, inexplicitly – seeking out manageable challenges and setting a pace for themselves. The idea here is to plan a run-up that doesn’t see your guildster sprint flat-out into a heavily-armoured wall.

Although it’s clear adventurers prefer bigger pay packets and relative safety when picking a route, the rules governing all this can take a good while to get a handle on – and you’ll fall foul of a fork in the road more than once, pushing a time-limited objective out of reach. It’s a rare area in which Dungeoneering suffers for lack of clarity.

It’s got the looks to match the tabletop mechanics – characters and environments literally scrawled on pen and paper. Your adventurers are Burton-esque, big-eyed creatures with a touch of Don’t Starve or Hello Kitty about them, and the lo-fi stylings suit the conceit. For all its interlocking ideas, Dungeoneering is a simple game.

Is it a roguelike? Well, character death is permanent – but since levelling starts again with each 20 minute spelunk, and an identical warrior turns up at the guild immediately after a slaying, the only thing you might miss is their name. 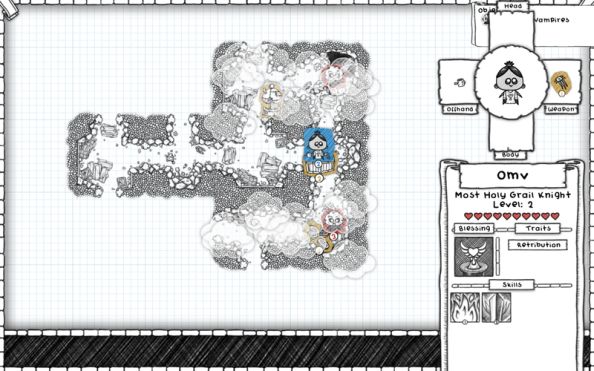 It’s your guild you’re upgrading, not the adventurers – recruiting more powerful heroes with better decks, and unlocking specialised loot to appear in the pool after battles. You keep the gold collected on failed attempts – and buying a new warrior can provide sudden release from an overbearingly difficult dungeon scenario.

Your upstart outfit – competitor to the far more prestigious Ivory League – grows visibly in the same way as the dungeons. There’s no management to speak of, but it’s fun to see your progress marked out in pencil.

Lead developer Colm Larkin is based in Dublin, and a sardonic, unseen bard narrates goings-on in a weary Irish brogue. His rhyming couplets are punctuated with long pauses that serve to emphasise the unlikely event of your warriors’ survival.

All this, and that instinct for simplicity, finds Dungeoneering presented with a polish that belies its five-person production. That only fails in the battles, where you’ll long for the crunch of card collision in Hearthstone – the satisfaction of walloping your opponent over the head with an overclocked minion. 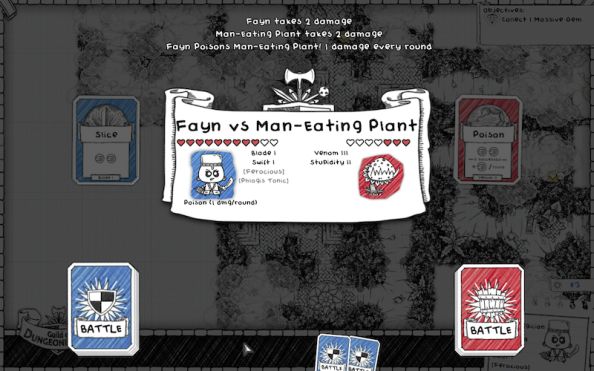 And little, oft-repeated oversights irk – the fact that the game always asks you to choose a card from the enemy’s hand to discard if your attack requires it, even if that enemy is dead. You’ll grumble at that, and groan at the occasional unexplained wrong turn – putting your graph paper warrior in the claws of a beast that’ll tear them into confetti.

“They’re so dumb,” laments the bard in a moment of particular frankness. “Why even bother?”

But you’ll keep bothering. Because there’s no question that Guild of Dungeoneering is a tightly-conceived, devilish little game, keen to show dungeon crawling conventions the trapdoor. It takes what it needs from the best in CCGs and tactics and folds them into a structure that’s clever and consciously underivative. It’s a deck I intend to keep playing with.