Being dungeon crawler is a pretty straight forward job. You walk through a dungeon (crawling is optional), kill everything in sight, steal as much loot as you can possibly carry, and escape out the other end. A thousand and one different games have done this.

Being a dungeoneer is a slightly different profession. You build dungeons, placing down corridors, caverns, and rooms for adventurers to raid through, and fill them with treasures and monsters. This is what Guild of Dungeoneering, a cute new indie game from Gambrinous, is all about. The aim is still to get a hero through danger, but this time the danger is set up by you. 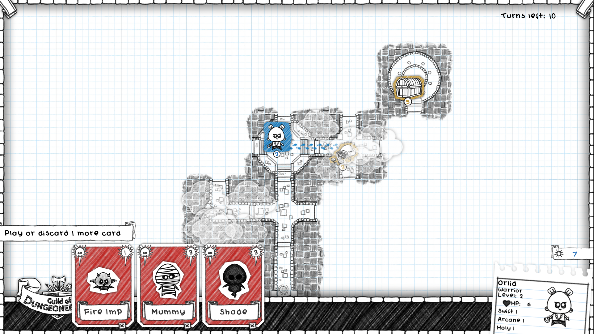 It’s a neat rebuild of the dungeon crawler genre, and works very simply. The board starts as a blank piece of squared paper with just the opening chamber and the final boss room scribbled out in pencil. Each turn you can choose three cards from a randomly selected hand. Cards come in three varieties: Seek, Dread, or Hope. Seek cards allow you to lay down new corridors and rooms, which are scribbled onto the paper board and connect together in a grid-like formation. Dread cards allow you to populate rooms with monsters, whilst Hope cards let you to place down loot.

The idea is to fit rooms and corridors together in a manner that will create a path to the boss. You hero will navigate these rooms at their own leisure, so you can’t actually prod them in the right direction. You just have to plan to make sure the route is available, and not paved with too much danger. Three cards have to be used every turn, so if your hero seems particularly stupid you may have little option but to keep filling the dungeon with ever more frightening and powerful monsters. 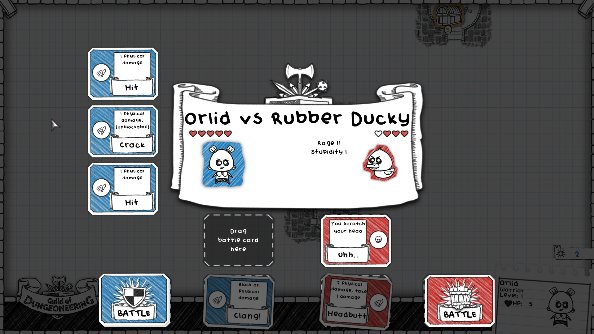 When your hero bumps into monsters you get to take direct control of them in battle. Like the dungeoneering sections, combat is card-based. The cards dealt to you each turn are based on your class (wizard or warrior) and the equipment you’ve found during your dungeon crawl. You’ll have three cards to choose from each turn, and the enemy always plays their card first so you can tactically plan ahead. Some cards will allow you to deal simple straight damage, whilst others will sacrifice output in order to disregard incoming damage. It’s all as simple as it can possibly be, but works because of it.

At first dropping down as few monster cards as possible seems to make the most sense, but it’s actually the opposite. As with all RPG-like games, the more you fight the stronger you get. Defeating monsters rewards you with loot, such as new armour, weapons, or hats, and these new items add new and interesting attack cards to your deck. And you’ll absolutely need as many varied attacks as you can get for the boss battle. 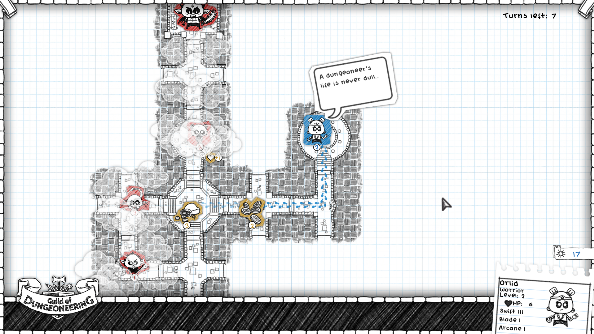 The cute style and easy mechanics make Guild of Dungeoneers feel unthreatening, but there is a little punishment in there. Dying once means game over, and you’ll have to start the dungeon all over again. And if you poorly arrange your dungeon pieces, you may block off the boss entirely and prevent yourself from winning. But every attempt gains you glory points, which can be used to hire new adventurers and expand your guild with new rooms like archery ranges and taverns.

The preview of the game I got to play kept things simple, and it’s unclear if the game will become progressively more challenging as it goes on. I hope that it doesn’t though. The one-life system seems perfectly balanced, ensuring that several mistakes in battle will see you off, but keeping the whole affair laid back and allowing you to just enjoy it’s quirkiness. I like the idea of Guild of the Dungeoneering being a friendly pick-up-and-play for a dozy Sunday afternoon, and hopefully that’s exactly what it will be.