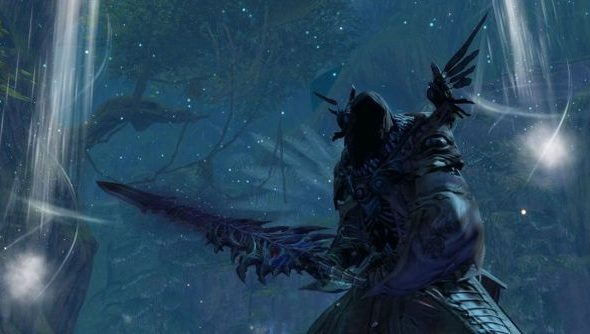 ArenaNet have spoiled another Guild Wars 2 profession elite specialization that will be coming in their debut expansion: Heart of Thorns. The deathless Necromancer will get their hands on a new weapon – the Greatsword. The Reaper, as the elite specialisation is called, focuses on draining an enemies life-force, before transforming into an avatar of destruction to freeze their foes, before cutting them down.

Here’s the Reaper in action:

It wouldn’t be a true Reaper without a scythe – a trait called Shroud Knight turns the Necromancer’s Death Shroud into a scythe wielding melee-focused warrior. One of the skills that comes from this new form, is Death’s Charge – which causes you to dash forward while spinning your scythe, before exploding in a poisonous cloud.

Reaper’s will also have total control over the element of frost, chilling and slowing enemies into submission. Chilled enemies will also deal less damage to the Reaper.

You can find out more about the Reaper, as well as other professional specialisations, over on the official Guild Wars 2 website.