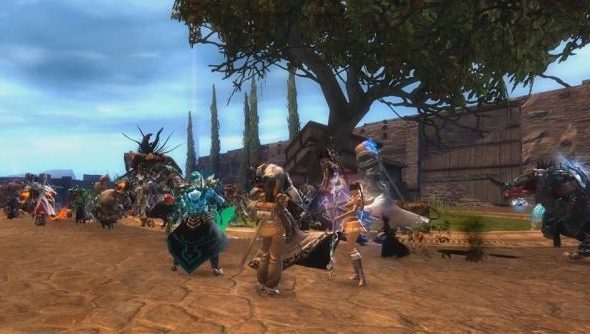 A bug introduced to Guild Wars 2 yesterday has briefly brought peace to the MMO’s most fractious quarter: World vs World. Players from competing servers found each other marked as friendly, and the constant contention that has gripped the game for almost three years since its release came to a sudden halt.

“We’re currently investigating a problem with world peace in WvW,” wrote ArenaNet – who have christened the issue W<3W.

Their players, meanwhile, decided to seize the chance to hold an inter-world peace march.

At 10pm BST, players from Gunnar’s Hold, Riverside and Elona Reach met in the Eternal Battlegrounds – the centre of WvW’s no-man’s land. As the gates of Stonemist Castle were opened, they shared stories and song. And as the spontaneous event began to wrap up, they decided to march.

Members of three worlds walked side-by-side in Stonemist’s lord room in a show of fleeting solidarity that will surely never be repeated – growing in number as the procession left the gates and spilled out into the Battlegrounds.

ArenaNet thanked the players for their impromptu ceremony, and told them to enjoy the bug while it lasts – they’re “working hard to fix it ASAP”.

Do you ever wish the continuous conflict of multiplayer PC games could stop, just for a day?