Heart of Thorns, the upcoming expansion for Guild Wars 2, is doing a lot in the name of accessibility. Over in the PvE campaign, Arenanet are making sure this new chapter in the dense story is still the perfect gateway for a brand new player. In the PvP corner, it’s all about making a game mode that doesn’t rely on your ability to defeat every other player in single combat.

Stronghold is the new mode that will launch with Heart of Thorns. It’s an objective-focused 5v5 game which requires players to march on an opposing team’s fortress, break down its doors, and defeat a towering Guild Lord inside. Importantly, it allows players to take on several different roles, meaning even the most rookie player on the server can successfully contribute to a victory. 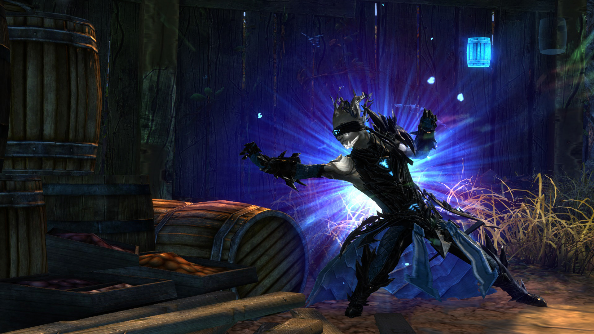 “Stronghold really opens up opportunities for players,” explains Jessica Boettiger, Guild Wars 2’s competitive QA lead. “You bring in different builds that have a totally different play style that wouldn’t normally be in a traditional PvP experience.” It’s all down to Stronghold being a game of various objectives. A sprawling map of lanes, gates, and fortresses, there’s kind of a MOBA feel at work. Players themselves cannot break down the gates that separate them from the ultimate target of the enemy’s Guild Lord; this is a task for NPCs. A little like creep, they spawn at your base and march to the next set of gates. Spawning them requires supplies, which can be looted from the corpses of enemies or gathered from a pile in the centre of the map. You can probably already see the distinct roles forming; attackers to strike at the Lord, defenders to keep your gates standing, and runners who keep the supply flowing and the NPCs spawning.

Without getting the balance just right, a game of Stronghold can easily collapse. Without the NPCs you’ll gain no ground at all, so bloodthirsty players may rack up a decent kill count but will do little to push on to victory. “There’s still a place for [1v1 combat] in Stronghold,” emphasises Boettiger, “But there’s also an opportunity for people who want to be competitive and who want to contribute to a team effort of accomplishing a goal and defeating the enemy.” 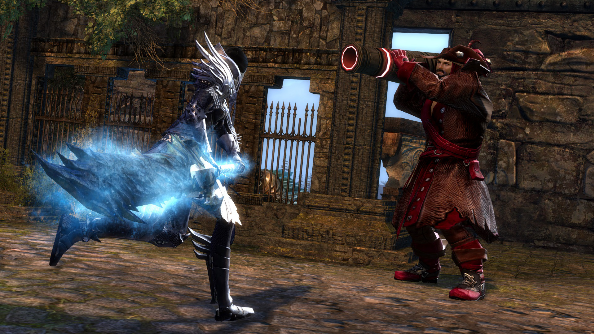 As the match goes on, players can summon a special hero character NPC to join the fight. Unlike the common Door Breaker NPCs, a hero is capable of dealing punishment to the enemy Guild Lord. They’re not to be relied upon, though. “Each NPC has a set purpose in the map, and it’s certainly not to replace players,” said Boettiger. “It’s more so to enrich the experience and develop the story within the PvP maps.”

For people who solely play PvE, it’s this ‘story’ in a game of Stronghold that is the bait to tempt them into the PvP arena. Stronghold tells the tale of a group of Pirates facing off against a guild of Knights, scrapping over a stretch of land known as Champion’s Dust. It’s a thin narrative, but the objectives of breaking down barriers, collecting supply, and herding NPCs to their positions makes Stronghold feel quest-like in its execution. It could very much be an event in Guild Wars’ PvE world. “It’s not what people may traditionally be used to in PvP. I think having a bit of PvE in there was definitely intentional because it adds layers to the experience,” said Boettiger. “[It] opens up the possibilities to players who may be a little more timid about [1v1 combat] or still developing their skill set. They can definitely still jump in and contribute.”